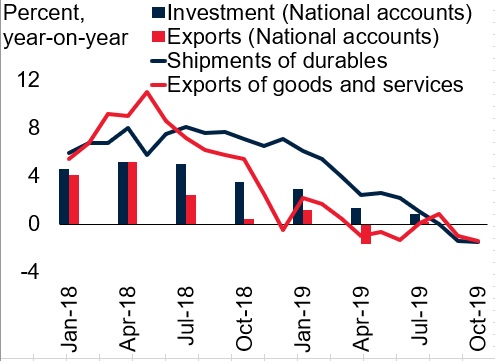 Yesterday the World Bank released a report forecasting a decidedly bleak outlook for GDP growth in advanced economies. The U.S. is expected to grow at just 1.8 percent this year and a further drop to 1.7 percent in 2021 and 2022. That forecast throws extremely cold water on what Donald Trump promised just two years ago.

On December 6, 2017 President Donald Trump stated at a news conference that his giant corporate tax cut (which Congress ended up passing later that same month) could boost GDP growth to “4, 5 and even 6 percent.” (See video clip below.) In 2018, U.S. GDP registered 2.9 percent and GDP growth for 2019 is expected to drop to approximately 2.2 percent, according to the Federal Reserve’s latest forecast.

Thus, a tax cut that has spiraled the United States’ national debt to over $23 trillion, and growing rapidly, has failed to make a material improvement in the substandard growth rate of U.S. GDP since the epic financial collapse of 2007 to 2010.

From 2009, the year after the worst of the financial collapse on Wall Street, through 2018, U.S. GDP has grown at an average rate of 1.8 percent. That substandard rate has persisted despite three rounds of Quantitative Easing (QE) by the Federal Reserve which, as a result, now has a balance sheet of over $4 trillion; $29 trillion in secret revolving loans by the Federal Reserve to bail out Wall Street trading houses and their foreign derivative counterparties; vast amounts of federal government fiscal spending to stimulate the economy; and the massive tax cut of the Trump administration.

Making matters even worse for the Trump administration’s promises of growth from the tax cuts, the World Bank researchers report that “As in many other advanced economies, the U.S. manufacturing sector has been very weak. Support from tax cuts and changes in government spending is expected to fade this year and become a drag on growth thereafter.”

The World Bank report forecasts that global growth overall for 2020 will register a barely discernible increase in growth of 2.5 percent from the 2.4 percent in 2019. But advanced economies are “expected to slow as a group to 1.4% from 1.6%, mainly reflecting lingering weakness in manufacturing.”

The report also contains a not so subtle outlook for another debt explosion at some point on the horizon. World Bank researchers write as follows:

“The global economy has experienced four waves of debt accumulation over the past fifty years. The first three ended with financial crises in many emerging market and developing economies. During the current wave, which started in 2010, the increase in debt in these economies has already been larger, faster, and more broad-based than in any of the previous three waves.”

The researchers write that since the financial crisis, global debt has reached “an all-time high of about 230 percent of global GDP in 2018.” And they offer this warning:

“High government debt levels can also limit the size and effectiveness of fiscal stimulus during downturns, and can dampen longer term growth by weighing on productivity-enhancing private investment.”