Yesterday Federal Reserve Chairman Jerome Powell testified before the Joint Economic Committee of Congress. Only one Congressman, Kenny Marchant (R-TX), had the courage to ask Powell about the Fed’s intervention in the repo loan market beginning on September 17. Since that time the Fed has been pumping hundreds of billions of dollars each week (that the New York Fed creates electronically out of thin air) into its 24 primary dealers on Wall Street. These primary dealers are not commercial banks that might be inclined to use the funds to make loans to local businesses or to consumers to buy a house and help their local economies. No, 23 of the 24 primary dealers are stock brokerage firms and investment banks that engage in leveraged bets in the stock, bond, commodities, and derivatives markets. The 24th is a foreign bank. (See primary dealer list below.)

There is nothing in the legislation that created the Fed, the Federal Reserve Act, that allows it to be the lender-of-last-resort to the trading houses on Wall Street. The Fed’s Discount Window, which is legally allowed to make emergency or seasonal loans, is restricted by law to just deposit-taking banks – not Wall Street trading houses.

And yet, bailing out Wall Street is exactly what the Fed has been doing since September 17 of this year and what it did secretly to the tune of $29 trillion during the financial crisis from December 2007 to the middle of 2010. The Fed does have some leeway in an emergency situation but that has to be brief and defined. The Fed has announced that it’s planning to keep its current money spigot to Wall Street flowing into at least January of next year. But according to Powell’s testimony to Congress yesterday, there’s no pressing crisis on Wall Street. Powell stated that “The core of the financial sector appears resilient, with leverage low and funding risk limited relative to the levels of recent decades.”

Powell knows that it’s a fallacy to say that leverage is low on Wall Street. It’s only low if one ignores the hundreds of trillions of notional (face amount) derivatives residing at the mega Wall Street banks.

Powell and the Federal Reserve have apparently decided that they are going to push the narrative with Congress and the media that these hundreds of billions of dollars each week that are being pumped out to Wall Street at the preposterously low rate of interest of between 1.55 and 1.59 percent are simply “technical” open market operations that the Fed does routinely as part of monetary policy. Of course, the last time it did this was during the financial crisis so it’s pretty hard to call it routine.

This is how the exchange went between Congressman Marchant and Powell: 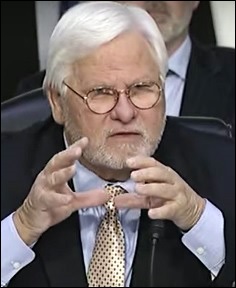 Marchant: “The disruption in the repo market that took place in September. Anticipated? Not Anticipated? Do you anticipate keeping the expansion at the level it is until you’re sure that won’t happen again?”

Powell: “Well, so, anticipated or not. It’s a different world post-crisis. And really because of all the expansion in our balance sheet and essentially what we’ve done now is we’ve now required financial institutions to have a lot more liquidity on their balance sheets so that the Fed doesn’t have to run in with our own liquidity. [Actually, just the opposite is true. The Fed allowed JPMorgan to reduce its reserves at the Fed by $145 billion since September 30 of last year and the Fed is now the major source of liquidity in the repo market.]

“So I think that’s a big benefit to the financial system. But a lot of that liquidity is held in our reserves. We used to manage the interest rate by keeping reserves scarce and we had a total of $20 billion. Right now we have in excess of $1.5 trillion in reserves. And so that means that we’re trying to find that level as we allowed the balance sheet to shrink, where reserves would become scarce, and there was really no way to know.

“I think the data that we had suggested that we were not close to that point until September. I think we’re still very much looking at what happened in September. But I think we learned in September that we needed to make sure that reserves didn’t go under that level we were at in mid-September, which is a little bit shy of one and a half trillion. So that’s really what we’re doing.

“It’s technical. I think we have it under control. We’re prepared to continue to learn and adjust as we do this but it’s a process. I would say it’s one that doesn’t really have any implications for the economy or for the general public though.”

Thus, the new talking points are: it’s too technical for the common brain so move along and leave it to the geniuses at the Federal Reserve. The second talking point is: nothing to see here because it doesn’t impact the economy or general public.

But, of course, this is dangerous propaganda. The Fed is back to creating the same kind of moral hazard that it created when it secretly pumped trillions of dollars into the Wall Street trading houses and global foreign banks during the financial crisis and then waged a multi-year court battle to keep it secret from the American people.

And right on cue, the New York Fed, the regional Fed bank that directly controls this money spigot to Wall Street and was the stonewaller-in-chief during the financial crisis, is back to its old games again of denying, thwarting or stonewalling requests for information on these repo loans from the public and the media.

The Federal Reserve in Washington, D.C. is considered an “independent Federal agency.” Its Board of Governors are appointed by the President and confirmed by the U.S. Senate. The New York Fed, on the other hand, is owned by the banks in its region (as are the other 11 regional Fed banks). So while the Federal Reserve is required to comply with the Freedom of Information Act (FOIA), the New York Fed is not. But to save face, the New York Fed likes to say that it “complies with the spirit of FOIA.” Which it decidedly does not do when it comes to any matter that might pierce the dark curtain it has drawn around its activities with the mega banks on Wall Street.

As we previously explained in this article, the Discount Window is not allowed to make loans to securities firms, just deposit-taking banks. So this is just the typical stonewalling tactic by the New York Fed.

Wall Street On Parade filed its own Freedom of Information request with the New York Fed on October 2. First we were told it would be responded to within 20 business days, which would have been October 31. On that date we received an unsigned email from the New York Fed telling us our request would be delayed until at least December 5.

We have filed a complaint with the Federal Reserve’s Inspector General, seeking an inquiry into the matter.

The New York Fed is the most inherently conflicted Frankenbank in the history of central banks. Not one member of its Board or management is elected by the American people and yet it can create trillions of dollars at the push of an electronic button and make that money flow to benefit the interests of the top ten percent of Americans. (It’s no wonder that New York is home to 70 billionaires.)

Henry Steele Commager, an American historian, once wrote that “The generation that made the nation thought secrecy in government one of the instruments of old world tyranny and committed itself to the principle that a democracy cannot function unless people are permitted to know what their government is up to.”

Tragically, the U.S. government has outsourced its money-printing to an unaccountable, privately-owned facility in lower Manhattan that has no respect for the public’s right to know. The New York Fed has a long history of denying basic information to Wall Street On Parade in order to keep a very dark curtain around its interconnections to Wall Street’s trading houses.

On April 6, 2015 William (Bill) Dudley, the President of the New York Fed at the time, stated in a speech that “the Federal Reserve already is very transparent and accountable to Congress and to the public.” Two days later, Wall Street On Parade attempted to get one piece of very basic information from the Fed. Again we were stonewalled. We wanted to know if JPMorgan Chase, a bank operating under a deferred prosecution agreement for two felony counts and under a criminal investigation for potential currency rigging (it pleaded guilty to that count in May 2015) was still the custodian of $1.7 trillion of mortgage backed securities owned by the Federal Reserve, as we had reported on November 3, 2014.

The Federal Reserve Board of Governors in Washington, D.C. has also been a party to protecting its interactions with Wall Street from public scrutiny. Ben Bernanke, the Fed Chairman during the financial crisis, stated that one of his priorities was to “make the Federal Reserve more transparent.” But in December of 2013, when we asked the communications office of the Fed for Bernanke’s 2007 and 2008 appointment calendar, we were told we would have to file a Freedom of Information Act (FOIA) request for it – an obvious stalling tactic for something so basic.

When we finally received the appointment calendar, there were redactions of 84 meetings that occurred between January 1, 2007 and the pivotal collapse of Bear Stearns on the weekend of March 15-16, 2008. Bernanke’s calendar for March 7, 2008 shows a full day of appointments redacted. On Saturday, March 8, Bernanke had an anonymous conference call with unnamed parties. At 11 a.m. the following Monday, March 10, he held a meeting in his office from 11 a.m. to 12 noon but whom he met with was completely blacked out.

The Fed might possibly justify this level of secrecy in the midst of a financial panic, but we received the deeply redacted materials six years after the crisis.

We are far from the only media outlet to have difficulty unleashing federal records from the iron grip of the Federal Reserve. Bloomberg News battled the Fed in court for years to obtain details about the unprecedented trillions of dollars in revolving loans the New York Fed made to Wall Street for almost three years during the financial crisis. On October 28, 2010, Matthew Winkler, Editor in Chief at the time of Bloomberg News, wrote an OpEd in his competitor’s newspaper, the Wall Street Journal, titled “Time for Bailout Transparency.” Winkler was attempting to shame the Fed into complying with the law and the courts, which had ruled in favor of Bloomberg News. Winkler wrote:

“There is no history that shows opacity is better for markets and the economy than transparency. Money flees secrecy. Unanswered questions engender suspicion, which undermines the financial system while giving some participants an unfair advantage.”

Fed Chairman Powell can’t open his press conferences saying that the role of the Federal Reserve is to represent the interests of the American people and then deny those same people the right to sunshine on its actions if he hopes to maintain any semblance of credibility. If he continues on this path, the history books will be as unkind to him as they have been to Bernanke and former Fed Chairman Alan Greenspan.