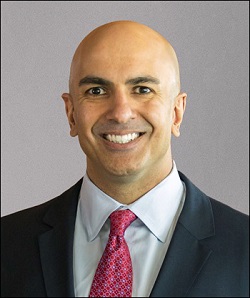 Neel Kashkari, President of the Federal Reserve Bank of Minneapolis

Later this afternoon, Neel Kashkari, the outspoken President of the Federal Reserve Bank of Minneapolis, will deliver the keynote address at a conference on “Wisconsin and the National Economy” at the Madison campus of the University of Wisconsin. Tomorrow, he’ll be taking questions at a Town Hall in the University of Wisconsin’s Student Union on the La Crosse campus.

Given Kashkari’s recent remarks on his lack of sympathy for the whining New York bankers who are demanding a liquidity bailout from the Fed – and on their own terms – we’ll be watching closely to see what he has to say today and tomorrow.

Last month Kashkari gave a harsh and candid interview with Yahoo! Finance (see YouTube video clip below) about the complaints from New York bankers that the New York Fed was tardy in riding to rescue the repo loan market when it spiked from about 2 percent interest rates on overnight loans to 10 percent on September 17. (Repo stands for “repurchase agreements” which are collateralized overnight loans that financial firms make between each other.) The New York Fed has now jumped into that market to bring rates down and is currently pumping hundreds of billions of dollars to Wall Street trading firms (primary dealers) weekly. It has said this will continue until at least next year.

The whining, pampered bankers of New York got the idea that the Federal Reserve, through its money spigot, the New York Fed, will ride to the rescue and design a labyrinthine concoction of bailout programs that are too numerous and complex for the public to track because that is exactly what the New York Fed did between 2007 and 2010. After the Fed lost its multi-year court battle to keep its bailout amounts secret and Senator Bernie Sanders attached an amendment to the Dodd-Frank financial reform legislation to audit the Fed’s bailout loans, the public finally learned in 2011 that the total tab the Fed spent to ride on its glistening horse to the rescue of Wall Street was $29 trillion.

Since September 17, the New York Fed has expanded its repo loan bailout program numerous times. It’s currently offering as much as $120 billion per day in overnight loans to Wall Street trading firms at a preposterously low interest rate of 1.55 percent as of last Friday. In addition, it is offering $35 billion twice a week (for a total of $70 billion a week) in two-week term loans to Wall Street securities firms. The interest rate on those loans last week was an equally preposterous 1.59 percent. And the Fed has also announced that to further lower interest rates it will be buying up $60 billion per month in Treasury bills — a program it says will last at least into the second quarter of next year.

The repo loans are being made to securities firms, some of which have less than stellar credit ratings. There is nowhere else on earth these firms could go and borrow at that rate. On September 17, for example, the free market pegged the appropriate loan rate at 10 percent for some of these firms.

And that seems to be a point that Kashkari is either missing or is disinclined to talk about. The discount window is only open to commercial banks, not securities firms that engage daily in high risk trading. And yet that’s exactly where the New York Fed’s money spigot is going today – to its 24 primary dealers, 23 of which are trading houses on Wall Street.

The reason that the Federal Reserve Act restricts the Fed’s discount window to commercial banks is because the whole purpose of the Fed is to act in the best interests of the U.S. economy and be a lender-of-last-resort only to commercial banks, which can then provide loans to businesses and consumers to fuel economic growth. There is nothing in the history of the Federal Reserve Act to suggest that the Fed was to be a source of bailout funds to Wall Street trading firms.

As other central banks around the world have started buying up stocks under the folly that it will create a so-called “wealth effect” that trickles down (the majority of stocks in the U.S. are owned by the top 10 percent of households) there is the danger that the crony New York Fed will try to do the same thing. In fact, the New York Fed did effectively buy up stocks by accepting them as collateral for loans to securities firms (primary dealers) during the financial crisis.

According to page 27 of the GAO audit of the Fed’s bailout programs during the financial crisis, by September of 2008 the New York Fed was throwing money at the junk bond market, the stock market, and whatever Citigroup was doing on its trading floor in London. The GAO writes as follows:

“Noninvestment grade securities” means junk bonds and “equities” means publicly-traded stocks. Both the junk bond market and stock market were plummeting at this time, meaning that this was clearly not safe collateral for loans.

On the same page of the GAO audit, the researchers note:

During the Yahoo! Finance interview last month, Kashkari was also asked about the capital levels that the largest banks should hold, given that recession indicators are flashing. Kashkari had this to say:

“Well I think the biggest banks are definitely safer than they were in 2006 and 2005. We would argue that they’re not safe enough. And it’s not the banks that are really at risk, it’s the taxpayers that are at risk. So if the biggest banks got into trouble again, they’d have to turn to the taxpayers because they don’t have enough of their own skin in the game to protect themselves if they make mistakes…”

What does it say about the competency and integrity of Congress and the federal regulators that 11 years after the greatest financial crash in the U.S. since the Great Depression, the biggest banks on Wall Street are still “not safe enough.”