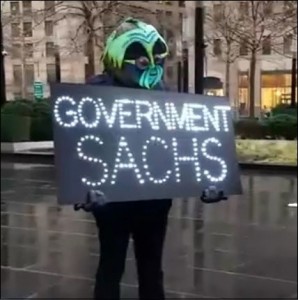 Since 1999 the chief risk officers of the Wall Street banks that blew themselves up in 2008 because of reckless and irresponsible risk practices have been meeting in secret and calling themselves the Counterparty Risk Management Policy Group (CRMPG). Their plan was to periodically release erudite-sounding reports to regulators suggesting that Wall Street could police itself under a set of “Guiding Principles” in order to perpetuate its off balance sheet debt bombs, unregulated OTC derivatives and a self-regulation regime.

The group was led by former New York Fed President E. Gerald Corrigan who then moved on to a lucrative career at Goldman Sachs.

Representatives from banks like Lehman Brothers, Citigroup, Bear Stearns and Merrill Lynch sat on key committees of the Group and helped to formulate the “Guiding Principles” for Wall Street. Lehman Brothers filed bankruptcy on September 15, 2008 – just five weeks after a report from the group on managing risk was released. One day before the Lehman collapse, Merrill Lynch had collapsed into the arms of Bank of America. In March of that year, Bear Stearns had already collapsed into the arms of JPMorgan Chase with a generous financial assist from the Fed. In the same year, Citigroup became insolvent and received the largest taxpayer bailout in U.S. history.

Notwithstanding the hubris of these risk managers lecturing others on how to contain risk while their own institutions are in the process of an epic collapse because of negligently managed risk, the Federal Reserve actually deferred to this group at the peak of the crisis in 2008.

According to an email obtained by the Financial Crisis Inquiry Commission from Patrick M. Parkinson of the Federal Reserve to Steven Shafran (an official of the U.S. Treasury Department who had joined it in February 2008 from Goldman Sachs to serve under U.S. Treasury Secretary Hank Paulson, the former Chairman and CEO of Goldman Sachs) the Counterparty Risk Management Policy Group’s plan for dealing with a major defaulting counterparty was going to be relied upon. Shafran wrote as follows:

“Tim [Geithner, President of the New York Fed] will ask Corrigan to accelerate formation of the private-sector default management group (DMG) that was proposed by CRMPG III. Specifically, we will ask the group to advise us on: (1) the information that we would need to obtain from a troubled dealer to assess the potential impact of closeout of a dealer’s OTC derivatives books on its counterparties and on financial markets; and (2) the information that a potential acquirer of a troubled dealer’s OTC derivatives book (and possibly also related hedges) to assess the potential risks and returns from such an acquisition. The group’s advice (and what we learn in the course of inquiries at Lehman) would inform the next steps in the MIS project and ultimately what our expectations will be with respect to dealer MIS.”

The email was dated September 5, 2008 and marked “Highly Confidential.” Just 10 days later, Lehman Brothers filed bankruptcy, triggering a mass wave of panic and contagion among its derivative counterparties that reverberated around the globe.

The Financial Crisis Inquiry Commission’s report seems to underestimate the significance of this pompous group of lecturers on Wall Street market structure, Guiding Principles and risk management. It mentions the group just three times in passing and in one footnote.

Until the public knows the full interactions of this group with the Federal Reserve, the U.S. Treasury and the New York Fed, we will continue to know very little about the greatest financial crash since the Great Depression.