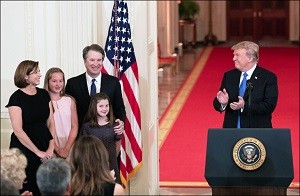 Brett Kavanaugh and His Family on the Evening of His Nomination to the Supreme Court, July 9, 2018 (Official White House Photo)

There is something revoltingly un-American about a man who stands with his wife and two young daughters to accept the nomination for the highest court in America, talks about feeding the homeless and coaching girls’ basketball – all the while knowing that a lot of very dirty corporate money lurks in the shadows of his nomination.

We’re talking about the fact that Trump made his Supreme Court nominee selection of Brett Kavanaugh from a list that was pre-approved by the Federalist Society – a receptacle for the dark money that flows from the billionaire Charles Koch’s network of corporate polluters and democracy-killing front groups that got the Supreme Court to rubber stamp unlimited corporate money in political campaigns via the Citizens United decision in 2010.

According to the Desmog, using data compiled by the Conservative Transparency project, Donors Trust and Donors Capital Fund are two of the largest dark money groups contributing to the Federalist Society. Donors Trust has given $13,494,100 in total while Donors Capital Fund has given another $11,366,368. The two nonprofits share the same address: 1800 Diagonal Road, Suite 280, Alexandria, Virginia. The actual contributors behind those large sums remain anonymous as a result of the structure of the groups.

In an exclusive report in 2010 we found that Charles Koch’s fingerprints were all over Donors Trust and Donors Capital Fund. We reported the following:

Our investigation was initiated to root out who had funded the circulation of an anti-Muslim film called “Obsession: Radical Islam’s War Against the West.” Just seven weeks before the 2008 Presidential election between John McCain and Barack Obama, and as a whisper campaign emerged linking Obama to Muslims, 100 newspapers and magazines across the U.S. distributed DVDs of the race-baiting “documentary.” Between the newspapers and a separate direct mail campaign, 28 million DVDs flooded households in swing voter states. Donors Capital Fund paid $17,778,600 to the Clarion Fund to carry out the effort. The funds from Donors Capital Fund represented 96 percent of all funds the Clarion Fund received in 2008.

Desmog further points out that the Federalist Society functions as an outpost of George Mason University (GMU) with more than two dozen interlinking individuals. GMU and its Mercatus Center have been heavily funded by Koch money for decades. On May 1 of this year, the Associated Press reported that GMU had “granted the conservative Charles Koch Foundation a say in the hiring and firing of professors in exchange for millions of dollars in donations, according to newly released documents.”

Charles Koch has directly met with a sitting Supreme Court Justice in advance of a major case. As we previously reported, in 2008, the same year that the Supreme Court would accept the Citizens United case,  Supreme Court Justice Clarence Thomas dined with Charles Koch and his wife, Elizabeth, at their private club in Indian Wells, California. That dinner was part of an all-expenses-paid, four day luxury trip for Thomas paid for by – wait for it – the Federalist Society.

While the Citizens United case was pending before the Supreme Court, Virginia Thomas (wife to the Justice) created a tax exempt organization called Liberty Central, Inc. with a former lawyer for the Charles G. Koch Foundation, Sarah Field, acting as her General Counsel and a former Koch lobbyist, Matt Schlapp, serving on her board at inception. More dark money flowed into that group, which was operated out of a post office box.

Charles Koch and his brother, David, are the controlling shareholders of Koch Industries Inc., one of the largest private corporations in the world with interests in oil, refining, pipelines, paper products, chemicals and commodities trading. Forbes puts their net worth at $51 billion each. Despite their penchant for “free markets,” they have never permitted their own company’s stock to trade in those “free markets.” When the Kochs purchased the buildings material and paper products company, Georgia-Pacific, in 2005 they delisted the shares from trading on the New York Stock Exchange.

The Kochs have kept plenty of secrets over the decades. As we reported in 2012, another “free markets” stronghold, the nonprofit Cato Institute, had been privately owned by a handful of men for decades, two of whom were Charles and David Koch. (Read our reporting here.)

In 2000, 60 Minutes did a story on Koch Industries, shedding light on what one of the dissident brothers, Bill Koch, was alleging in Court documents. The report revealed that “Bill Koch filed a lawsuit in federal court claiming that much of the oil collected by Koch Industries was stolen from federal lands. At the trial, 50 former Koch gaugers testified against the company, some in video depositions. They said Koch employees had a name for cheating on the measurements.” The theft was called the “Koch Method.”

The 60 Minutes report continued: “The company used the Koch method with virtually all its customers. In the 1980s alone, Koch records show those so-called adjustments brought the company 300 million gallons of oil it never paid for. And it was pure profit. Bill Koch says that profits from that oil were a minimum of $230 million…In December 1999, the jury found that Koch Industries did steal oil from the public and lied about its purchases – 24 thousand times.”

Restoring democracy in America begins with cleaning up the corporate kleptocracy that now runs the country through dark money, front groups, a corrupted Federal Court nominee process and an insidious political campaign financing system. Instead of looking at just Russian interference in our elections, all of the above belongs before an independent special counsel.