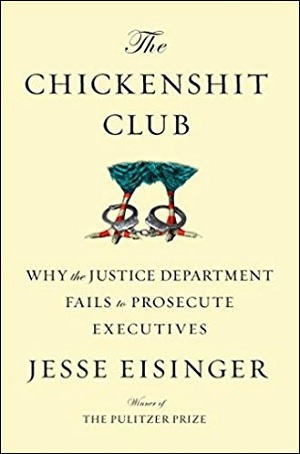 Last year Simon & Schuster released The Chickenshit Club: Why the Justice Department Fails to Prosecute Executives by the Pulitzer Prize winning journalist at ProPublica, Jesse Eisinger. If you read nothing else this summer, you should read this book followed by Nomi Prins’ Collusion: How Central Bankers Rigged the World. The two books provide Americans with a comprehensive understanding of how the Justice Department, Federal regulators, a growing number of Federal judges and the central bank of the United States known as the Federal Reserve have been corrupted by corporate influence. To a large degree, they now serve their corporate masters, not the American people.

The Chickenshit Club is a lively, fascinating and disturbing look behind the scenes at the U.S. Justice Department, its U.S. Attorney’s Office for the Southern District of New York and the judges and lawyers who presided over some of the major corporate scandals of the last 15 years.

At Wall Street On Parade, having delved deeply previously into the law firm Paul, Weiss, Rifkind, Wharton & Garrison LLP (see Meet the Lawyer Who Gets Citigroup Out of Fraud Charges), we were about half way through The Chickenshit Club when we came upon a real kick in the gut. Eisinger described how Judge Lewis A. Kaplan, seated for life on the Federal bench in the Southern District of New York, had handled the case brought by the Justice Department against KPMG executives, one of the big four accounting firms, over its fraudulent tax shelter scheme to help the one percent dodge over $2.5 billion in taxes. Eisinger writes:

“Kaplan had been at the New York law firm of Paul, Weiss, Rifkind, Wharton & Garrison for twenty-four years before his judicial appointment. He kept close friendships with its lawyers, once serving as a character witness for a retired partner who had been disbarred for pilfering more than $500,000 from a family trust.”

Immediately, we knew KPMG was about to see its fortunes change for the better. Eisinger quotes a few sentences from a key ruling by Kaplan. The Judge excoriated the Justice Department’s handling of the case writing that “The government let its zeal get in the way of its judgment,” and “The government was economical with the truth in its early responses to this motion. It is difficult to defend even the literal truth of the position it took in its first memorandum of law.” Kaplan further suggested that the government had pressured KPMG to cut off its payments of legal fees to its accused employees, thus denying the defendants their constitutional rights. Kaplan wrote: “Everyone charged with a crime is entitled to the assistance of a lawyer. A defendant with the financial means has the right to hire the best lawyers money can buy. A poor defendant is guaranteed competent counsel at government expense. This is at the heart of the Sixth Amendment.”

Kaplan had flipped on its head an egregious corporate fraud case, massaging it into defendants’ struggle for their constitutional rights. As Kaplan likely knew it would, it played well in the press while devastating the attorneys for the Justice Department. (It should be noted that the government’s case was so strong that KPMG admitted criminal wrongdoing, signed a deferred prosecution agreement and paid $456 million in penalties.)

But as Eisinger explains, Kaplan wasn’t done yet: “…in the summer of 2007, the KPMG fiasco reached its peak. Kaplan…threw out the cases against thirteen of the sixteen indicted KPMG executives.” That decision was upheld by the Second Circuit Court of Appeals.

Now flash forward to what has come out about Kaplan since Eisinger’s book was released. On May 11 of this year, Rex Weyler wrote a stunning analysis for Greenpeace on how Kaplan had conducted himself in a case involving the big oil giant, Chevron. Weyler writes:

“Corporate lawyers spend millions to assault victims with SLAPPs (Strategic Lawsuit Against Public Participation). The most recent SLAPP strategy in the US, popularized by attack-dog New York law firm Gibson Dunn, employs US ‘racketeering’ (RICO) laws against environmental groups, victims of pollution, and their lawyers…

“In perhaps the most vindictive SLAPP in history, Chevron — one of the world’s largest corporations, with over $260-billion in assets — found a sympathetic New York judge to accept a RICO lawsuit against the victims of its vast oil pollution in Ecuador’s Amazon basin…

“In 2009 the oil company hired the notorious ‘rescue squad’ law firm of Gibson Dunn, found a corporate-friendly Judge, Lewis A. Kaplan in New York, and began a series of SLAPP attacks on the victims, on their lawyers, and on the Ecuadorian judicial system. Over the next five years, Kaplan allowed virtually any Chevron motion, denied defendant motions, mocked the victims and their lawyers, and allowed a RICO racketeering case against two Ecuadoreans — Secoya Indigenous leader Javier Piaguaje and farmer Hugo Camacho — and their American lawyer, Steven Donziger.

“Meanwhile, in Ecuador, the Indigenous and peasant villagers won a $9.5 billion compensation judgment, confirmed by appellate courts and by Ecuador’s Supreme Court (Court of Cessation). In response, Chevron sold its assets in Ecuador, fled the country, refused to pay, and threatened the victims with a ‘lifetime of litigation.’

“The company has since retained over 60 law firms, 2,000 lawyers, paralegals, six public relations firms, squads of private investigators, and at least one bribed witness, who later admitted to lying. Lawyers for the victims estimate Chevron has spent over $2 billion to avoid payment of the court judgment, the largest collection of SLAPP suits in history.”

The Greenpeace author lays out egregious conduct by Kaplan in the Chevron case, including this stunning revelation:

Read the Greenpeace article about Kaplan’s handling of the Chevron case and ask yourself if America is still a democracy or if our nation has fully devolved into a corporate kleptocracy from the Oval Office on down.

Meet the Conflicted Team that Could Prosecute Trump-Russia Charges

A Closer Look at the Eric Holder “Doctrine” and the $1.87 Billion CDS Settlement