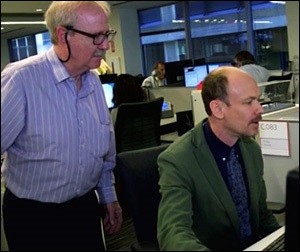 Mark Hosenball, a National Security Reporter for Reuters (left) with Ned Parker, One of the Reuters Reporters to Break the Story of the Plan for a Russian Back Channel

As reporters in every major newsroom in the U.S. scramble to fill in the blanks in the bizarre tale of President Trump’s son-in-law, Jared Kushner, attempting to set up a secret back channel with Russia using Russian communication equipment almost two months before Trump had taken the reins as President, there’s another related story that has not been adequately fleshed out.

Eight days before Washington Post reporters named Kushner as a key participant in this plan, reporters at Reuters had already reported on May 18 that “Michael Flynn and other advisers to Donald Trump’s campaign were in contact with Russian officials and others with Kremlin ties in at least 18 calls and emails during the last seven months of the 2016 presidential race…” The Reuters report then dropped the bombshell that Flynn and Sergei Kislyak, Russia’s ambassador to the United States, “discussed establishing a back channel for communication between Trump and Russian President Vladimir Putin that could bypass the U.S. national security bureaucracy, which both sides considered hostile to improved relations, four current U.S. officials said.”

The Washington Post story naming Kushner ran on Friday, May 26, which triggered a full weekend of breathless reporting on CNN. It included a peculiar detail. The Washington Post article said it had obtained its information in the form of an anonymous letter in “mid December” but it didn’t publish its article until May 26, eight days after Reuters had confirmed that such a back channel had, indeed, been discussed for use between Trump and Putin.

In the myriad incarnations of retelling by the media, the public has been left with the impression that it was Kushner that was going to be using this back channel, not Trump and Putin as Reuters clearly reported.

The May 18 article at Reuters was bylined by Ned Parker, Jonathan Landay and Warren Strobel with additional reporting by John Walcott in Washington, Natalia Zinets and Alessandra Prentice in Kiev and Christian Lowe in Moscow. Mark Hosenball, a national security reporter for Reuters, was also involved in the reporting.

The Reuters and Washington Post reports spilled into the Sunday talk shows with myriad experts attempting to explain the inexplicable: why a President-elect would want to use secret lines of communication with a foreign adversary outside of the purview of U.S. intelligence.

NBC’s Meet the Press opened with scenes of Trump and Kushner walking together and this statement from former CIA Chief John McLaughlin: “If an American intelligence officer had done anything like this we’d consider it espionage.”

On ABC’s This Week, Congresssman Adam Schiff (D-CA), the Ranking Member of the House Intelligence Committee, joined host Martha Raddatz to discuss the allegations. Schiff said that the House Intelligence Committee will want Kushner to appear and testify. Raddatz asked if Kushner should remain in the White House, given these allegations. Schiff responded:

“Well, you know there’s another question about his security clearance and whether he was forthcoming about his context on that. If these allegations are true and he had discussions with the Russians on establishing a back channel and didn’t reveal that, that’s a real problem in terms of whether he should maintain his security clearance…One of the things the Russians do, and this is in the category of allegation at this point, is they financially entangle people. And they like to do business with businesspeople because they think they can exert economic influence over them in a way that will shape policy. So if that is what happened here or what was going on here, yes, it would be of deep concern and something we need to get to the bottom of.”