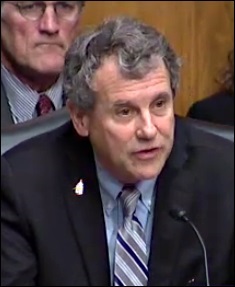 The majority of American citizens have never heard of the U.S. Treasury agency known as FinCEN – short for Financial Crimes Enforcement Network. But for those who work for Wall Street brokerage firms or the mega Wall Street banks like JPMorgan Chase, Citigroup or German banking giant Deutsche Bank, just the mere mention of FinCEN can quickly produce beads of sweat dripping onto those expensive Canali suits. That’s because FinCEN is the Federal agency where suspicious financial activity that might turn out to be money laundering gets reported. All three banks, and numerous others, have had their share of scandalous run ins with money laundering.

In recent weeks, the U.S. Senate Banking Committee, Senate Intelligence Committee and the House of Representatives Financial Services Committee have all shown an interest in what FinCEN might have in its database that would shed sunshine on involvement of the Trump business empire or Trump campaign and Russian money inflows.

Senator Sherrod Brown, the Ranking Member of the Senate Banking Committee, sent a letter on March 2 to U.S. Treasury Secretary Steven Mnuchin, asking for documents and explaining his rationale as follows:

“…Russia has been subjected to a number of international and US sanctions, as have many prominent Russian leaders and business people. Investors from Russia have, in the past, played a significant role in the Trump organization. example, President Trump’s son Donald Trump Jr. stated at a conference in 2008 that President Trump’s businesses involved substantial Russian investments. He reportedly said: ‘And in terms of high-end product influx into the US, Russians make up a pretty disproportionate cross-section of a lot of our assets; say in Dubai, and certainly with our project in SoHo and anywhere in New York. We see a lot of money pouring in from Russia.’

“Such statements raise important questions about whether any Trump firms, including those now controlled by his children, retain ownership interests in Russian entities, or have business ties or projects elsewhere that include Russian investors. If so, what is the nature of those ownership or investment arrangements?  Might they provide opportunities for economic leverage over the President or any of his family members or associates?  Do they put the President or his family in danger of violating U.S. statutes, regulations, or simply prudent standards of conduct for the leader of our nation?”

Treasury Secretary Mnuchin appeared before the Senate Banking Committee on an unrelated matter on May 18. During the hearing, Senator Brown told Mnuchin that he had not received an appropriate response to his March 2 letter. He asked Mnuchin to provide “a complete list of Trump business associates and financial ties to ensure that any foreign entanglements are benign…” Mnuchin denied that he hadn’t been responsive to Brown’s letter.

The Senate Intelligence Committee made its requests for records from FinCEN in April but earlier this week the Ranking Democrat on that Committee, Senator Mark Warner, complained that the request has not been fully complied with by the administration.

On Tuesday of this week, Congresswoman Maxine Waters, Ranking Member of the House Financial Services Committee and four of her colleagues sent the CEO of Deutsche Bank, John Cryan, a letter raising a raft of startling questions about Trump’s Russian entanglements.  The letter stated:

“We write seeking information relating to two internal reviews reportedly conducted by Deutsche Bank (‘Bank’): one regarding its 2011 Russian mirror trading scandal and the other regarding its review of the personal accounts of President Donald Trump and his family members held at the Bank. What is troubling is that the Bank to our knowledge has thus far refused to disclose or publicly comment on the results of either of its internal reviews. As a result, there is no transparency regarding who participated in, or benefited from, the Russian mirror trading scheme that allowed $10 billion to flow out of Russia. Likewise, Congress remains in the dark on whether loans Deutsche Bank made to President Trump were guaranteed by the Russian Government, or were in any way connected to Russia. It is critical that you provide this Committee with the information necessary to assess the scope, findings and conclusions of your internal review.”

On the issue of the possibility that the Russian government might have guaranteed loans to Trump made by Deutsche Bank, the letter explained:

“Press reports citing unnamed sources indicate that this review was done to determine if loans made to [Trump] were backed by guarantees from the Russian Government, or were in any way connected to Russia, as they were made in ‘highly unusual circumstances.’ At a time when nearly all other financial institutions refused to lend to Trump after his businesses repeatedly declared bankruptcy, Deutsche Bank continued to do so — even after the President sued the Bank and defaulted on a prior loan from the Bank — to the point where his companies now owe your institution an estimated $340 million.”

A footnote in the letter refers to an article in the Guardian newspaper of the U.K. this past February which expands on the unusual circumstances of Deutsche Bank’s continuing loans to Trump. The article notes the following:

“In November 2008 the German bank took the unusual step of suing Trump after he failed to repay $40 million of a $640 million real estate loan. Trump countersued. The tycoon argued that Deutsche had contributed to the global recession, which had depressed property prices. He demanded $3 billion in damages.