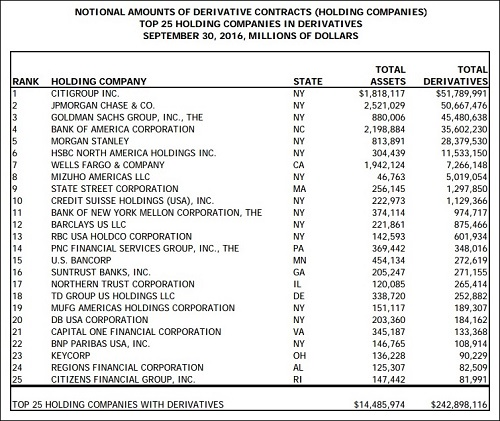 In the midst of being skewered across media outlets yesterday for his chaotic rollout of an Executive Order that appeared to target Muslims, including those legally living in the U.S. as businessmen, doctors, university faculty and students — who were initially denied reentry after travel abroad — President Donald Trump tried desperately to change the subject. Following a plunge of over 200 points in the Dow Jones Industrial Average yesterday, Trump pivoted to something he thought would please his financial backers on Wall Street. He called the Dodd-Frank financial reform legislation passed in 2010 by the Obama administration a “disaster” and promised to “do a big number” on it soon. The Dow closed down 122 points — now wary of Trump’s fire-ready-aim leadership on complex matters.

The legitimate fear across Wall Street right now is that Trump’s zero-vetting approach to rule-by-Executive-Order could leave Wall Street in the same chaotic state as the airports experienced from his ham-fisted approach to immigration.

Goldman Sachs has a unique vested interest in repealing chunks of Dodd-Frank while making sure that the Glass-Steagall Act is not reinstated. That’s because when it comes to derivatives, Goldman Sachs is keeping a lot of secrets.

The Office of the Comptroller of the Currency (OCC) is the regulator of national banks. Each quarter it publishes a report on the derivative holdings of the biggest Wall Street banks and their holding companies. Its most recent report shows that as of September 30, 2016 Goldman Sachs Bank USA (a taxpayer-backstopped, FDIC insured bank where it holds its derivatives) had “credit exposure to risk-based capital” of 433 percent. That figure was more than double that of JPMorgan Chase (216 percent) and six times that of Bank of America (68 percent).

The amount of these derivatives is insane on all levels but, clearly, Goldman stands out starkly in its ratios.

There’s another highly disturbing aspect of Goldman’s derivatives. Dodd-Frank legislation mandated that derivatives at the big Wall Street banks move into the sunshine by moving out of over-the-counter contracts whose details are known only to the buyer and seller and onto some type of centrally cleared platform. Dodd-Frank was signed into law on July 21, 2010. It’s almost six years later and yet the OCC’s report of September 30, 2016 shows that of the total derivatives held by Goldman Sachs only 24 percent are centrally cleared versus 76 percent at Goldman that remain over-the-counter. Again, that’s a far higher percentage of over-the-counter contracts than at its peer banks on Wall Street.

The opacity of these over-the-counter derivatives played a very large role in blowing up Wall Street in 2008. Banks refused to loan to one another, thus drying up liquidity, because they didn’t know which banks would get hit with collateral calls on their derivatives that they couldn’t meet and would thus be declared insolvent.

In addition to being on the hook to each other for derivative claims, Wall Street had used the big insurer, AIG, as a counterparty to its credit default swaps. When the government gave a $185 billion taxpayer bailout to AIG it was actually a backdoor bailout of Goldman Sachs’ and its derivatives book along with other Wall Street banks. After much public pressure, it was finally revealed that major Wall Street banks, foreign banks and hedge funds received more than half of AIG’s bailout money ($93.2 billion). A chart released by AIG showed that Goldman Sachs received $12.9 billion of the bailout funds – another secret bailout of Wall Street hubris.

As Wall Street On Parade has pointed out time and again, the only sensible reform of Wall Street is to permanently and completely separate banks holding insured deposits from the speculating casino investment banks on Wall Street. This would force the banks to properly downsize their crazy derivative holdings since the deposits would not be there to provide the credit rating. It would also ensure that the U.S. taxpayer would not be subject to having a perpetual gun to their head to bail out Wall Street gamblers who are getting obscenely rich in a heads we win, tails you lose business model.