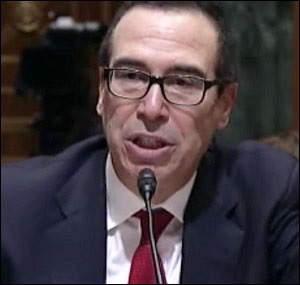 The U.S. Treasury Secretary is one of the four most powerful posts in the U.S. government, overseeing a sprawling network of functions that impact the average American every single day. Putting a man or woman in that post who has exhibited impeccable integrity throughout their career should be the sworn duty of every member of the U.S. Senate, which oversees the confirmation hearing process.

Yesterday, every Democratic Senator on the Senate Finance Committee upheld their duty and boycotted the vote on Steven Mnuchin, President Donald Trump’s nominee for Treasury Secretary. The boycott denied the Senate Finance Committee the ability to have a quorum and a final vote. Trump had pushed Mnuchin forward not because of his sterling credentials but because Mnuchin had helped to raise millions of dollars for Trump as his Campaign Finance Chairman.

As the tawdry details of Mnuchin’s business dealings unfolded in the initial confirmation hearing on January 19 and it became clear that Mnuchin had brazenly withheld disclosures on tens of millions of dollars in problematic assets, it also became clear that Republicans were unfazed by the shocking revelations and would attempt to vote him into office anyway.

The Treasury’s power is striking. Its bureaus include the IRS; the Office of the Comptroller of the Currency which oversees national banks; the Bureau of Engraving and Printing and the U.S. Mint that issues the currency and coin of the U.S.; the Financial Crimes Enforcement Network which is supposed to combat money laundering; and numerous other units. The Treasury Secretary not only sits atop the Treasury but as a result of the 2010 Dodd-Frank financial reform legislation, the Treasury Secretary now chairs the Financial Stability Oversight Council which is responsible for preventing another epic financial implosion like that of 2008. The Treasury Secretary also serves as the Managing Trustee of the Social Security and Medicare Trust Funds and has one of three votes, along with the Secretaries of Commerce and Labor, on the federal corporate pension guarantor, the Pension Benefit Guaranty Corporation.

It also emerged during Mnuchin’s confirmation hearing that while he was in charge, OneWest had foreclosed illegally on active-duty U.S. military service members.

At the close of the confirmation hearing, Senator Wyden added the following: 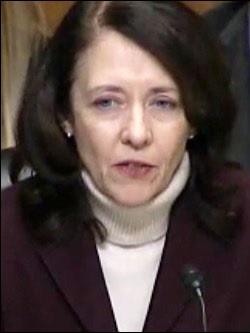 Equally outrageous, during the hearing Mnuchin walked back Donald Trump’s pledge made on the campaign trail to reinstate the Glass-Steagall Act. The exchange with Senator Maria Cantwell went as follows:

Cantwell: I wanted to ask you, do you support returning to Glass-Steagall?

Cantwell: And so, is that the position of what the Republican platform was? Because I thought it was Glass-Steagall.

Cantwell: So when did that change?

Mnuchin: That’s been part of the campaign. It’s been in some of his speeches.

Cantwell: At the convention it was Glass-Steagall.

Mnuchin: At the Convention, the Republican position was Glass-Steagall.

Cantwell: And so his position was never Glass-Steagall is what you’re saying or all along he meant a different version?

Mnuchin: Again, I can only tell you that post-convention this is an issue that he and I have discussed – okay – and something that we will be looking at.

Cantwell: And do you think that Mr. Manafort’s leaving had anything to do with the change?

Cantwell: Okay. To me this is a very important issue. In fact I would have said some point in August that the Republican platform had a stronger position on Glass-Steagall than the Democratic platform. But now I understand that the President-elect doesn’t really support Glass-Steagall. He supports some modern version which I don’t understand. So maybe you could help me. Tell me what that modern version is.

Mnuchin: Again I think that separating out banks and investment banks right now under Glass-Steagall would have very big implications to the liquidity and the capital markets and banks being able to perform necessary lending. I think in terms of looking at a lot of regulatory issues, the administration will look at Glass-Steagall and what I refer to as the 21st Century Glass-Steagall as part of regulatory reform, have a view as to what’s appropriate.

The entire purpose of the Glass-Steagall Act, which was signed into law in 1933 and prevented a collapse of the U.S. financial system for 66 years until its repeal in 1999, was to separate banks holding insured deposits backstopped by the U.S. taxpayer from investment banks on Wall Street that make high-risk gambles in trading and securities underwriting schemes that can blow up the bank. It’s completely specious for Mnuchin to now say that he supports a modern version of Glass-Steagall – but not a version that carries out the core purpose of Glass-Steagall to separate the taxpayer-backstopped, insured deposit banks from the casinos on Wall Street.