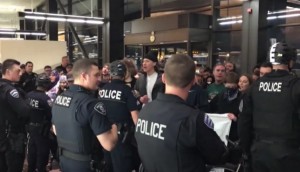 At 8:05 a.m. this morning in New York, futures on the Dow Jones Industrial Average were showing a potential loss of 55 points when the market opens at 9:30 a.m. At least some of the market jitters can be traced to the weekend of chaos at U.S. airports where legal residents of the U.S. found themselves in a twilight zone, unable to get back into the country as a result of President Donald Trump’s hastily penned Executive Order. As media word spread of university faculty, Ph.D. candidates, medical students and business executives being denied reentry into the U.S. after visits abroad, spontaneous protests erupted at major international airports across the U.S. including San Francisco, Boston, Chicago, New York, Seattle, Los Angeles, and Dulles outside of Washington, D.C.

The chaos resulted from an Executive Order signed by Trump on Friday that bans the majority of refugees from coming to the U.S. for 120 days and suspends visas for persons from seven majority-Muslim countries: Iraq, Iran, Syria, Yemen, Sudan, Libya and Somalia.

There was an immediate outcry from CEOs of  tech companies in Silicon Valley who have essential personnel working in the U.S. with visas. According to the National Foundation for American Policy, 51 percent of tech startup companies with a value of more than $1 billion had an immigrant as a co-founder. Google co-founder, Sergey Brin, joined protesters at San Francisco International Airport. Brin said he was protesting in his personal capacity as a refugee, not in his official Google capacity. Apple CEO Tim Cook and Microsoft CEO Satya Nadella expressed strong objections to the Trump order. Sam Altman, President of Y Combinator, also protested at the San Francisco airport and released a statement on his blog. He wrote that Trump’s “precedent of invalidating already-issued visas and green cards should be extremely troubling for immigrants of any country or for anyone who thinks their contributions to the US are important.  This is not just a Muslim ban.  This is a breach of America’s contract with all the immigrants in the nation.”

The economic impact from banning college and university students from the targeted countries could also weigh heavily on U.S. prospects. The Washington Post reports that in 2015 “college students from overseas contributed more than $35 billion to the U.S. economy, according to the Commerce ­Department.” (How many parents from any foreign country will want their children to attend colleges and universities in the U.S. when chaotic, draconian policies can be crafted on a Friday afternoon by executive action.)

The public outrage against the sudden order that left people stranded from their families and homes in the U.S. intensified after media reports indicated that neither the Department of Justice nor the Department of Homeland Security had been consulted on the Executive Order prior to Trump signing it on Friday.

The Attorneys General of 15 states and the District of Columbia denounced Trump’s action in a joint statement, writing:

“As the chief legal officers for over 130 million Americans and foreign residents of our states, we condemn President Trump’s unconstitutional, unAmerican and unlawful Executive Order and will work together to ensure the federal government obeys the Constitution, respects our history as a nation of immigrants, and does not unlawfully target anyone because of their national origin or faith.”

The American Civil Liberties Union (ACLU) took swift court action in Federal Court in New York, obtaining a temporary national halt to implementation of the order pending further court proceedings. Lee Gelernt, deputy director of the ACLU’s Immigrants’ Rights Project who argued the case, said “This ruling preserves the status quo and ensures that people who have been granted permission to be in this country are not illegally removed off U.S. soil.” ACLU Executive Director Anthony D. Romero, released the following statement:

“Clearly the judge understood the possibility for irreparable harm to hundreds of immigrants and lawful visitors to this country. Our courts today worked as they should as bulwarks against government abuse or unconstitutional policies and orders. On week one, Donald Trump suffered his first loss in court.” (Read the ACLU complaint here and the court ruling here.)

The ACLU also reported that it had received over 350,000 donations totaling more than $24 million over the weekend.

At least three other favorable court rulings over the weekend were issued by courts in Boston, Seattle and Alexandria, Virginia. Unfortunately, there are media reports that government officials at some airports are ignoring the court rulings and refusing entry to individuals with valid green cards.

Anger from America’s allies has also diminished the nation’s standing around the world. German Chancellor Angela Merkel spoke to Trump via phone Saturday, telling him that his refusal to accept refugees from Syria (which is in the throes of a humanitarian crisis) violates the Geneva Conventions. Justin Trudeau, Prime Minister of Canada, Tweeted that “those fleeing persecution, terror & war, Canadians will welcome you, regardless of your faith. Diversity is our strength.”

As scenes of police in body armor throwing protestors to the ground at the Seattle-Tacoma International Airport flashed across CNN screens, Donald Trump appeared on camera telling reporters that things were going very “nicely” at the airports.