Is Deutsche Bank as Dangerous to Financial Stability as Citigroup Was in 2008? 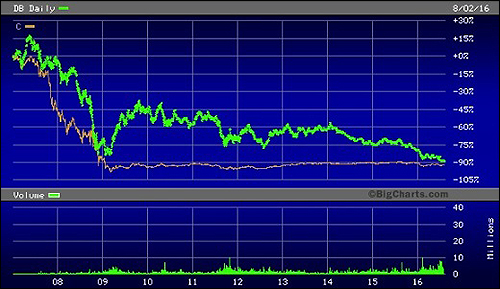 Deutsche Bank is starting to resemble the financial basket case that Citigroup became in 2008, leading to Citigroup’s partial ownership by the U.S. government for a time and the bank requiring the largest taxpayer bailout in U.S. financial history. Citigroup’s teetering condition and its interconnectedness to other mega banks played a critical role in the Wall Street crash and collapse of the U.S. economy.

That Deutsche Bank (which is highly interconnected to other major Wall Street banks and locked and loaded with tens of trillions of dollars in derivatives) is now showing the same kind of stresses as Citigroup back in 2008, raises the obvious question about just how effectively the Obama administration has reined in systemic financial risk after six years of reassurances that Dodd-Frank financial reform was getting the job done.

On this date a year ago, Deutsche Bank’s stock closed at $34.88. Its share price at the open this morning on the New York Stock Exchange was $12.56, a loss of 64 percent in one year’s time. But from June 1 of 2007, prior to the onset of the financial crisis, Deutsche Bank has lost a whopping 90 percent of its share value, right on par with Citigroup.

As of this morning’s open, Deutsche Bank has a measly $17.32 billion in equity capital versus a portfolio of derivatives amounting to just shy of $50 trillion notional (face amount) as of December 31, 2015.

This is how we reported Citigroup’s situation on November 24, 2008:

As of the end of the third quarter of 2008, according to the Office of the Comptroller of the Currency, Citigroup’s bank holding company held $38 trillion in notional amount of derivatives versus equity capital of $20.5 billion on November 21 of the same year.

In June of this year, the Federal Reserve said that the U.S. unit of Deutsche Bank, Deutsche Bank Trust Corp., had failed its stress test. The Fed cited “material unresolved supervisory issues that critically undermine its capital planning process” as one of the reasons for the failed grade.

Yesterday it was announced that Deutsche Bank (and Credit Suisse) would be dropped from an index of the top blue chip stocks in Europe, the Stoxx Europe 50 Index. Citigroup was yanked from the Dow Jones Industrial Average on June 8, 2009 in the midst of the financial crisis.

In June, the International Monetary Fund (IMF) issued a report on the “Financial System Stability” of German financial institutions and what potential systemic impact one blowing up might have on other domestic German banks and insurers as well as financial stability in other countries. The report found that spillover effects would not just impact Germany but also be felt in France, the U.K. and the U.S.

The report called out Deutsche Bank as “the most important net contributor to systemic risks.” (See chart below.) Explaining their position, the authors wrote:

“Among the G-SIBs [Global Systemically Important Banks], Deutsche Bank appears to be the most important net contributor to systemic risks, followed by HSBC and Credit Suisse. In turn, Commerzbank, while an important player in Germany, does not appear to be a contributor to systemic risks globally. In general, Commerzbank tends to be the recipient of inward spillover from U.S. and European G-SIBs. The relative importance of Deutsche Bank underscores the importance of risk management, intense supervision of G-SIBs and the close monitoring of their cross-border exposures, as well as rapidly completing capacity to implement the new resolution regime.”

The IMF is not the only body to be sounding alarms over the interconnectedness of the global banks. Wall Street On Parade has been reporting for some time now that the U.S. Treasury’s Office of Financial Research has been sounding the same alarms.

The only thing certain about the next financial train wreck is that nobody is going to be able to say “nobody saw it coming.”

Systemic Risk Among Deutsche Bank and Global Systemically Important Banks (Source: IMF: “The blue, purple and green nodes denote European, US and Asian banks, respectively. The thickness of the arrows capture total linkages (both inward and outward), and the arrow captures the direction of net spillover. The size of the nodes reflects asset size.”)