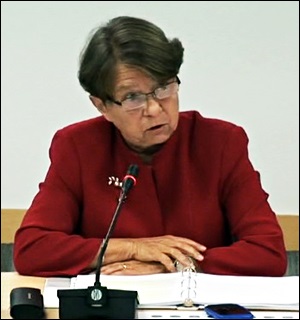 In the Afterword that appears in the paperback edition of “Flash Boys,” author Michael Lewis writes that following the publication of the hardcover edition of the book in 2014 and his appearance on 60 Minutes (in which he called the U.S. stock market rigged and mapped out the case against high frequency trading) “it has sounded like a desperate bid by a slumlord to gussy the place up to distract inspectors. In any case, the slumlords seem to realize that doing nothing is no longer an option: Too many people were too upset.”

Doing nothing while going through the motions of doing something perfectly defines the Securities and Exchange Commission. Today the Securities and Exchange Commission is continuing its illusion of dealing with the rigged structure of the U.S. stock market by holding a meeting of its Equity Market Structure Advisory Committee, some of whose members have themselves been charged with rigging the market. The deeply conflicted SEC Chair, Mary Jo White, will deliver opening remarks.

As part of the day’s agenda, Venu Palaparthi, a Senior Vice President at Virtu Financial is scheduled to appear on a panel addressing “market quality.” This is what Senator Elizabeth Warren had to say about Virtu at a June 18, 2014 hearing of the Senate Banking Subcommittee on Securities, Insurance and Investment:

In his Afterword, Lewis quantifies what this skimming scam is costing in real dollars at just one large money manager for a public pension. Lewis writes:

“In 2014, this giant money manager bought and sold roughly $80 billion in U.S. stocks. The teachers and firefighters and other middle-class investors whose pensions they managed were collectively paying a tax of roughly $240 million a year for the benefit of interacting with high-frequency traders in unfair markets.”

Lewis has become to Wall Street what Bernie Sanders is to the political establishment: a truth teller who just keeps hammering away at a systemically corrupt system. Lewis sports a degree in economics from the London School of Economics and writes with the authority of an insider. Lewis got his start on the trading floor of Salomon Brothers as a bond salesman where he was seated next to the raucous traders. Lewis wrote about that experience in a bestselling classic “Liar’s Poker,” and has been documenting Wall Street crimes ever since in books and articles, including the recent “The Big Short,” which was made into a movie. The popular film captures the insidious greed and corruption that led to the 2008 collapse of century old Wall Street firms and meltdown of the U.S. economy.

No one knowledgeable about the Praetorian Guard that Wall Street has in place around the corridors of power believed that a rigged stock market would be rectified by regulators appointed by a President elected with Wall Street money. But there was some hope for the rash of class action lawsuits that followed the revelations in “Flash Boys.”

One such lawsuit was brought by law firm Robbins Geller which provided the court with the specific details of the manipulative techniques being deployed daily in what had once been the most respected stock market in the world.

“For at least the last five years, the Defendants routinely engaged in at least the following manipulative, self-dealing and deceptive conduct:

“electronic front-running – where, in exchange for kickback payments, the HFT [high frequency trading] Defendants are provided early notice of investors’ intentions to transact by being shown initial bids and offers placed on exchanges and other trading venues by their brokers, and then race those bona fide securities investors to the other securities exchanges, transact in the desired securities at better prices, and then go back and transact with the unwitting initial investors to the their financial detriment;

“rebate arbitrage – where the HFT and Brokerage Firm Defendants obtain kickback payments from the securities exchanges without providing the liquidity that the kickback scheme was purportedly designed to entice;

“slow-market (or latency) arbitrage – where the HFT Defendants are shown changes in the price of a stock on one exchange, and pick off orders sitting on other exchanges, before those exchanges are able to react and replace their own bid/offer quotes accordingly, which practices are repeated to generate billions of dollars more a year in illicit profits than front-running and rebate arbitrage combined;

“spoofing – where the HFT Defendants send out orders with corresponding cancellations, often at the opening or closing of the stock market, in order to manipulate the market price of a security and/or induce a particular market reaction;

“layering – where the HFT Defendants send out waves of false orders intended to give the impression that the market for shares of a particular security at that moment is deep in order to take advantage of the market’s reaction to the layering of orders; and

“contemporaneous trading – whereby obtaining material, non-public information concerning the trading intentions of Plaintiff and the Plaintiff Class and then transacting against them,  Defendants violate the federal securities laws, including §20A of the Exchange Act.”

This case was dismissed by the Federal District Court, as were other lawsuits of a similar nature. It wasn’t that the Courts didn’t believe the charges. The Judges simply twisted their legal logic into a pretzel to get rid of complex cases in which the Wall Street defendants had lined up almost every bulge bracket law firm in New York to bury the Court under mountains of paper and appeals.