What the Falling Price of Oil Is Telling You 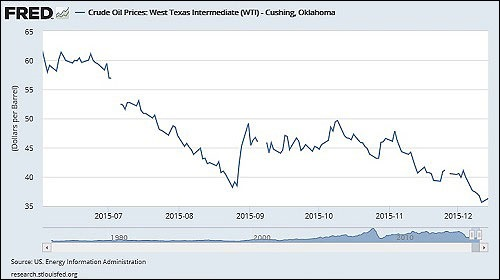 Exactly one year ago today, the headline story at Wall Street On Parade was titled: “Oil Crash: Don’t Believe the Happy Clatter.” We explained that there was a “mushrooming false narrative taking over the business airwaves” predicting that the rapid price decline in oil would lower gas prices at the pump, fueling a healthier consumer with more disposable income and thus a more robust economy for 2015. Our counter prediction was that the oil price collapse “will decidedly not lead to a more robust economy in the United States for very long.”

This was our reasoning at the time:

“This isn’t a little speed bump in oil prices. This is one of the most dramatic and rapid crashes in a key industrial commodity in history. Since June, the price of West Texas Intermediate (WTI), the domestic crude oil produced in the U.S., is down by 47 percent. The price of the internationally traded crude oil, Brent, is down by a similar figure.

“If this price collapse were happening in just crude oil, it could be shrugged off as a supply glut problem attributable to growing shale production in the U.S. and over production among OPEC members. But other industrial commodities are in freefall as well. Iron ore prices are down 49 percent this year while copper has declined 15 percent. The price of natural gas is down 30 percent in just the past month, including a plunge of 9 percent just yesterday.

“Data from the Bureau of Labor Statistics shows that a broad gauge of industrial commodity prices entered a gradual decline in June and then began to plunge in September. That chart looks suspiciously similar to the price action in industrial commodities in the same time period in 2008 – which signaled an early warning to the greatest economic collapse in the United States since the Great Depression.

How did that robust economy prediction work out? According to the GDPNow model from the Atlanta Fed, as of December 16, the seasonally adjusted annual rate of growth forecast in the U.S. is a tepid 1.9 percent.

And where are we today in terms of industrial commodity prices? Are prices stabilizing? Surely they must be if the Federal Reserve just hiked interest rates to keep U.S. economic growth from overheating.

Unfortunately, according to a report today at the Dow Jones web site, MarketWatch, the U.S. coal industry is in the midst of “serial bankruptcies”; the two major oil benchmarks, West Texas Intermediate and Brent, “have lost more than a third of their value” in 2015; copper is off by over 27 percent, iron ore by over 45 percent, with platinum and palladium each off by over 30 percent.

Welcome to the new normal – where the Fed tells us how good things are as the materials used in a growing economy continue to collapse in price from slack demand and growing gluts.