Credit Default Swaps Blow Out on Credit Suisse as its Stock Price Hits an All-Time Low of $2.82 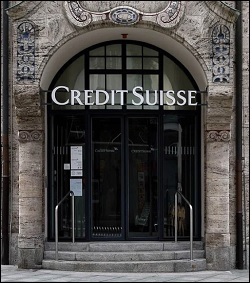 That $4 billion capital raise that was supposed to shore up confidence in global banking behemoth Credit Suisse turns out to have been too little, too late. Yesterday, 5-year Credit Default Swaps (CDS) on Credit Suisse blew out to 446 basis points. That’s up from 55 basis points in January and more than five times where CDS on its peer Swiss bank, UBS, are trading.

The price of a Credit Default Swap reflects the cost of insuring oneself against a debt default by the bank. Who might be desperate to buy protection against a default by Credit Suisse and driving up the cost of that protection? The mega banks on Wall Street that are counterparties to its derivative trades come to mind, as well as hedge fund speculators.

Things don’t look any brighter this morning for Credit Suisse. Its shares are trading in Europe at 2.67 Swiss Francs or approximately $2.82 – an all-time low. Year-to-date, shares of Credit Suisse have lost 66 percent of their value as of yesterday’s close on the New York Stock Exchange.

Credit Suisse is Switzerland’s second largest bank, after UBS. It has been embroiled in nonstop scandals that suggest incompetent risk controls inside the bank.

The Board of Credit Suisse decided to hire the Big Law firm, Paul, Weiss, Rifkind, Wharton & Garrison, to conduct an internal investigation of the matter. On July 29, 2021 Paul Weiss issued a 165-page report on its version of what happened. Paul Weiss generously found that no fraud had occurred — just zombie risk management at a Global Systemically Important Bank (G-SIB).

This is how the Paul Weiss report portrayed the zombie risk managers at Credit Suisse:

“The Archegos-related losses sustained by CS [Credit Suisse] are the result of a fundamental failure of management and controls in CS’s Investment Bank and, specifically, in its Prime Services business. The business was focused on maximizing short-term profits and failed to rein in and, indeed, enabled Archegos’s voracious risk-taking. There were numerous warning signals—including large, persistent limit breaches — indicating that Archegos’s concentrated, volatile, and severely under-margined swap positions posed potentially catastrophic risk to CS. Yet the business, from the in-business risk managers to the Global Head of Equities, as well as the risk function, failed to heed these signs, despite evidence that some individuals did raise concerns appropriately.”

“…a Prime Services business [lending to hedge funds] with a lackadaisical attitude towards risk and risk discipline; a lack of accountability for risk failures; risk systems that identified acute risks, which were systematically ignored by business and risk personnel; and a cultural unwillingness to engage in challenging discussions or to escalate matters posing grave economic and reputational risk. The Archegos matter directly calls into question the competence of the business and risk personnel who had all the information necessary to appreciate the magnitude and urgency of the Archegos risks, but failed at multiple junctures to take decisive and urgent action to address them.”

Credit Suisse’s reputation took another hit from its involvement in the Greensill Capital scandal and its infamous spy-gate scandal in 2019 where the bank spied on, and followed, various employees.

And if all of this wasn’t enough, on November 2 S&P cut Credit Suisse’s credit rating to one notch above junk. That was followed by more disturbing news on November 23 when the bank reported that its clients had yanked $88.3 billion of their assets out of the bank.

According to an historical timeline on the Credit Suisse website, it was previously known as Schweizerische Kreditanstalt, which was eventually shorted to SKA. The timeline notes that SKA’s New York Branch was granted a license to accept deposits in 1964. Credit Suisse’s New York branch has continued for decades to accept deposits, but they are not insured. In the resolution plan for Credit Suisse that it filed with the Federal Reserve in 2020, it writes:

“Our New York Branch is not a member of, and its deposits are not insured by, the FDIC. CS’ biggest U.S. presence is through its broker-dealer related businesses. Typically broker-dealer activities are resolved with a rapid runoff of the businesses as long as the resolution strategy is supported by adequate operational capabilities, such as the ability to transfer client accounts to peer institutions while causing minimal disruptions to the broader financial markets.”

Wall Street trading houses accepting uninsured deposits resulted in the banking crisis of the early 1930s when thousands of banks failed and people rushed to pull their money from uninsured banks. Congress passed the 1933 Glass-Steagall Act banning the combination of investment banks/brokerage firms with federally-insured banks. (Federal deposit insurance was also created under the Glass-Steagall Act to restore confidence in the U.S. banking system.) The Glass-Steagall Act served the nation well for 66 years until its repeal under the Bill Clinton administration in 1999, allowing trading firms to merge with federally-insured, deposit-taking banks. It took just nine years without Glass-Steagall for Wall Street to collapse in a replay of the crash of 1929.

Despite both Democrats and Republicans promising in their 2016 campaign platforms to restore the Glass-Steagall Act, the idea quickly bit the dust once the Trump administration took office. (See Mnuchin Says Trump Administration Never Intended to Restore Glass-Steagall Act.) Instead of Congress removing the Wall Street trading casino from the nation’s federally-insured banks, Congress has sat back and allowed the crypto circus to spread its risk directly into federally-insured banks.

It’s time for the American people to pick up the phone and demand better from their elected members of Congress.