On August 1 of this year, we penned this headline at Wall Street On Parade: Brace Yourself for Federally-Insured Bank Failures Caused by Crypto. Our research for that article was so stomach-churning and frightening that we emailed the article to key staff for the Senators who sit on the Senate Banking Committee. One of the banks we researched for that article was Silvergate Bank. We wrote:

“FDIC-insured Silvergate Bank is part of the publicly-traded Silvergate Capital Corp., (ticker SI). Silvergate’s website says this about its hot pursuit of crypto: ‘We began pursuing digital currency customers in 2013 and have been deliberate in our approach to serving this community since then. Today, we have 1,300+ digital currency and fintech customers that are using our platform daily to grow and scale their businesses.’

“Silvergate Capital’s 10-K (annual report) for the year ending Dec 31, 2021 that it filed with the Securities and Exchange Commission acknowledged this about the crypto market that it has so deliberately decided to pursue:

‘The characteristics of digital currency have been, and may in the future continue to be, exploited to facilitate illegal activity such as fraud, money laundering, tax evasion and ransomware scams; if any of our customers do so or are alleged to have done so, it could adversely affect us…’

“Silvergate’s 10-K also states that ‘Deposits from digital currency exchanges represent approximately 58.0% of the Bank’s overall deposits and are held by approximately 94 exchanges.’

“Let’s pause for a moment to digest that last statement: More than half of a federally-insured bank’s deposits are tied to crypto while federal regulators are twiddling their thumbs and letting it happen. This news comes despite the fact that legendary investor Warren Buffet has called the largest cryptocurrency, Bitcoin, ‘rat poison squared’; global economist, Nouriel Roubini, told the Senate Banking Committee in 2018 that ‘Crypto is the Mother of All Scams and (Now Busted) Bubbles While Blockchain Is The Most Over-Hyped Technology Ever, No Better than a Spreadsheet/Database.’ More recently, Bill Gates, co-founder of Microsoft, one of the most valuable tech companies in the world, stated that cryptocurrencies are ‘100% based on greater fool theory.’ And just this past June 1, more than 1,600 scientists and software engineers wrote to Committee chairs in Congress to warn that both crypto and blockchain are shams.”

On November 11 the crypto exchange, FTX, announced it was filing for Chapter 11 bankruptcy, along with its related hedge fund, Alameda Research – which had been using (and losing) billions of dollars of customer funds from FTX to trade without the knowledge of customers. More than 100 opaque affiliates of FTX, many headquartered in offshore locations, also filed for bankruptcy.

Headlines swirling around the world are comparing the management of FTX to that of Madoff, Enron, and blood-testing fraud, Theranos. (Sam Bankman-Fried, the co-founder and now-fired CEO of FTX, learned from news headlines last Friday that the founder and CEO of Theranos, Elizabeth Holmes, was sentenced to 11 years in prison.)

On the same day that FTX made its filing in bankruptcy court in Delaware, the FDIC-insured Silvergate Bank released a statement which included this nugget from its CEO, Alan Lane:

“In light of recent developments, I want to provide an update on Silvergate’s exposure to FTX. As of September 30, 2022, Silvergate’s total deposits from all digital asset customers totaled $11.9 billion, of which FTX represented less than 10%. Silvergate has no outstanding loans to nor investments in FTX, and FTX is not a custodian for Silvergate’s bitcoin-collateralized SEN Leverage loans. To be clear, our relationship with FTX is limited to deposits.”

Why Alan Lane thinks the public would be comforted to know that his bank is connected to FTX – and its potentially wiped-out customers – to the tune of more than $1 billion raises questions about his own mental processes. (Perhaps Lane doesn’t recall that JPMorgan Chase was hit with two felony counts by the U.S. Department of Justice for its role in the Bernie Madoff fraud and forced to pay $1.7 billion to settle the case.) Federally-insured banks must follow “Know Your Customer” rules and report any suspected cases of money laundering to the federal agency, FinCEN. It has been credibly reported that as much as $10 billion was transferred from customer funds at the FTX crypto exchange to Bankman-Fried’s hedge fund, Alameda Research, with a large chunk of that now missing. Federal prosecutors might find that Silvergate Bank’s compliance personnel should have reported the suspicious movement of customer funds to FinCEN.

How many more FDIC-insured banks are spread across the United States with significant ties to crypto-related firms and the potential to see their share prices sink and/or reputational damage? We know of four FDIC-insured banks whose share prices have already been hit: Silvergate Bank, Customers Bank, Signature Bank and Metropolitan Bank. (See chart below.) 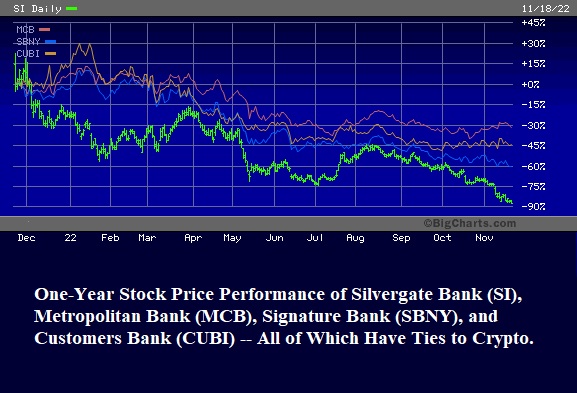 But there may also be very large banks that have slithered below the radar with their involvement in crypto. For example, on June 21 we reported on the shocking ways that State Street has become involved in crypto. State Street is not some little bank that could go under without causing ripples. As of March 31, it was custodian and/or administrator to $41.7 trillion in assets and held $176 billion in deposits.

Allowing crypto to get anywhere near the federally-insured banking system could not have happened without the flow of money from the crypto industry into the campaign coffers of some members of Congress, including some of the members who sit on the Senate Banking and House Financial Services Committees. This reality screams for reform of corporate financing of political campaigns as well as overhaul of banking regulations. (See After Crypto Money Piled into Campaign Coffers of Senators Lummis and Gillibrand, They Introduced a Sweetheart Legislative Bill for Crypto.)

This metastasizing of the crypto contagion into the federally-insured banking system could also not have happened if members of Congress and federal banking regulators were aware of how federal banking insurance came into being in the first place. Following the Dow Jones Industrial Average losing 89 percent of its value from 1929 to 1932, thousands of banks were insolvent from their reckless involvement with Wall Street speculations.

The 1930s banking crisis came to a head on March 6, 1933, just one day after Franklin D. Roosevelt was inaugurated as President. Following a month-long run on the banks, Roosevelt declared a nationwide banking holiday that closed all banks in the United States. On March 9, 1933, Congress passed the Emergency Banking Act which allowed regulators to evaluate each bank before it was permitted to reopen. Thousands of banks were deemed insolvent and permanently closed.

There was no federal deposit insurance on bank deposits at that time, meaning that depositors lost all of their deposits in many cases or were paid just pennies on the dollar.

To restore the public’s confidence in the U.S. banking system, President Roosevelt signed into law the Banking Act of 1933, now popularly known as the Glass-Steagall Act after its authors Senator Carter Glass from Virginia, and House Rep Henry Steagall from Alabama. The legislation created federal deposit insurance for bank accounts for the first time in the U.S., while also banning these federally-insured banks from speculating in, or underwriting, stocks.

The Glass-Steagall Act protected the U.S. banking system for 66 years until its repeal in 1999 during the Wall Street-friendly Bill Clinton administration. The momentum for its repeal came from the announcement in 1998 that Sandy Weill wanted to merge his trading firms, Salomon Brothers and Smith Barney (under the Travelers Group umbrella), with Citicorp, parent of the federally-insured Citibank. (See the Editor of Wall Street On Parade’s testimony before the Federal Reserve in 1998 on that merger proposal and the proposed repeal of the Glass-Steagall Act in this YouTube video.) The Fed approved the merger despite expert witnesses warning it would be a disaster for the country.

Just nine years after Glass-Steagall was repealed in 1999, Wall Street collapsed the U.S. financial system in 2008 in a replay of 1929.

Weill had a self-confessed personal motive for his merger, which created the so-called “universal bank,” Citigroup. Weill told his merger partner, John Reed of Citibank, that his motivation for the deal was: “We could be so rich,” according to Reed in an interview with Bill Moyers.