After Crypto Money Piled into Campaign Coffers of Senators Lummis and Gillibrand, They Introduced a Sweetheart Legislative Bill for Crypto 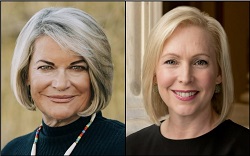 On June 7, Senator Kirsten Gillibrand, a Democrat from New York who sits on the Senate Agriculture Committee which oversees commodities, and Senator Cynthia Lummis, a Republican from Wyoming who sits on the Senate Banking Committee which oversees Wall Street and trading, introduced a bill as an early Christmas present to the crypto industry. It carries the Alice in Wonderland title of the Responsible Financial Innovation Act.

In reality, it is an irresponsible piece of legislation whose sponsorship by these two women only makes sense when you understand that their campaign coffers are being stuffed with money from the crypto industry.

Let’s start with Lummis. A $5800 donation is not a big deal to every member of Congress. But it is a big deal to a Senator from Wyoming, a state whose population is less than 600,000.

According to data from the Federal Election Commission, one of the largest donations to the Lummis campaign last year was $5800 from Jesse Powell, the CEO of cryptocurrency exchange, Kraken (a/k/a Payward). Powell was profiled in a New York Times article last week for creating a sick culture at his company where he discusses “who can refer to another person as the N word,” and has “told workers that questions about women’s intelligence and risk appetite compared with men’s were ‘not as settled as one might have initially thought.’ ”

Kraken was fined a measly $1.25 million last September by the crypto-captured Commodity Futures Trading Commission (CFTC) for committing two rather large crimes. According to the CFTC, Kraken engaged in “illegally offering margined retail commodity transactions in digital assets, including Bitcoin” and failed “to register as a futures commission merchant (FCM).”

Powell wasn’t the only crypto titan stuffing $5800 into the Lummis campaign. FEC records show that the two co-founders and Managing Partners of Multicoin Capital, Pyahm (Kyle) Samani and Tuschar Jain, each contributed $5800 on July 29, 2021. Multicoin runs both a hedge fund and a venture capital fund that are involved in crypto.

Upon closer scrutiny, it turns out that ADAM stands for Association for Digital Asset Markets, a crypto trade group. Multicoin Capital has a representative on ADAM’s Board of Directors, as do numerous other crypto exchanges and crypto interests. Michelle Bond is its CEO.

Bond’s bio says she previously worked “as international counsel at the U.S. Securities and Exchange Commission for the implementation of the Dodd-Frank Act.” Dodd-Frank was another piece of sell-out legislation to trading interests. Bond’s bio also notes that she “launched her legal career at the Financial Industry Regulatory Authority (FINRA)….” FINRA is Wall Street’s captured self-regulator that runs Wall Street’s private justice system that locks customers and employees out of the nation’s courts.

Also among the top six donors to the Lummis campaign last year was a $5800 contribution from Kristin McKenzie Smith, who lists her job on the FEC form as a lobbyist for law firm Thompson Coburn. That law firm brags on its website as follows:

To read a summary of these freakish laws, see here.

Three law partners at Boies gave the maximum $5800 to Gillibrand’s campaign last year: Amy Neuhardt, Jonathan Sherman, and Lee Wolosky. (Wolosky, who spent 19 years at Boies, has since moved on to become partner and co-chair of the litigation department at Jenner & Block.)

A Boies law partner, Matt Schwartz, was named a “Cryptocurrency Trailblazer” in 2018 by the National Law Journal. The publication noted his work for Ripple Labs, creators of a cryptocurrency and the target of proceedings by the Justice Department, FinCEN, and the Securities and Exchange Commission.

“A dedicated global team of more than 80 lawyers focuses on tracking and analyzing developments affecting the blockchain and cryptocurrency industry, spanning multiple practice areas within the firm. The Latham team includes former enforcement supervisors and prosecutors from the US Commodity Futures Trading Commission, US Securities and Exchange Commission, UK Serious Fraud Office, UK Financial Conduct Authority and the Securities & Commodities Fraud Task Force of the US Attorney’s Office for the Southern District of New York, as well as former senior US Department of Justice officials.

On June 7, the day the Lummis-Gillibrand bill was introduced in the Senate, Dennis Kelleher, the President and CEO of  Better Markets, issued the following critique of the proposed legislation:

“The bipartisan crypto bill with the Orwellian name of ‘Responsible Financial Innovation Act’ released today will likely result in crypto being largely unregulated, even though it is an extremely volatile financial product with a limited track record, which itself is mostly bad.  Worse, it appears to be designed to disarm the public by making them think crypto will be properly regulated while the industry and the insiders know that is simply not true. The tell is that the bill gives the industry what it wants most: the Commodities Futures Trading Commission (CFTC) as its primary regulator, even though it exists to police markets where physical producers and purchases of commodities like corn, wheat, oil, natural gas, hogs, and cattle hedge their price risk to facilitate the delivery of everyday goods to the American people.

“Of course, crypto is nothing like corn or hogs or oil, but the industry wants the CFTC as its regulator because it is the smallest financial regulator with the smallest budget.  The financial industry and its allies in Congress have made sure that the CFTC has been chronically underfunded for decades…

“Giving the CFTC jurisdiction over crypto is like New York City outsourcing crime fighting to a small-town police force. You might see a cop every now and then and they might even make the occasional arrest, but by and large the criminals will be running the place.

“By doing this, Congress is playing with fire, and it should know better because that’s exactly what they did in the 1990s by first repealing the Glass-Steagall Act and then prohibiting the regulation of derivatives with the 2000 Commodities Futures Modernization Act (CFMA), including credit default swaps (CDS). Those Congressional actions, which were also broadly bipartisan, resulted in gigantic banks that were too-big-to-fail and trillions in dangerous derivatives that were unregulated. In 2008, that caused the biggest taxpayer-funded bailouts in history, the worst financial crash since 1929, and the worst economy since the Great Depression, devastating tens of millions of Americans who lost jobs, homes, savings and so much more.

“Now, just 14 years after that horrific crash, Congress is again listening to the financial industry’s Siren song of innovation, which was also the tune they played for repealing Glass-Steagall, enacting the CFMA, and unleashing CDS on the global financial system.  In a world that wasn’t run by lobbyists, awash in campaign cash, greased by the revolving door, and dominated by secret, backroom deals, this bill would never be filed…”

Americans for Financial Reform, was equally harsh in their assessment of the proposed legislation, writing:

“A bill introduced by Sens. Kirsten Gillibrand and Cynthia Lummis to revamp regulation of cryptocurrencies is little more than a giveaway to an industry that wraps itself in the mantle of innovation but poses serious risks to investors, consumers, and possibly even financial stability…

“Notably, the bill proposes an approach to classifying digital assets as securities that are linked to underlying ancillary assets, or tokens. This approach would cede more regulatory power to the Commodity Futures Trading Commission while undermining existing securities law and oversight by the Securities and Exchange Commission. The measure could even create a loophole that traditional securities issuers could exploit to avoid more robust disclosure requirements. Additionally, the bill would exempt small transactions from being reported as taxable income and allow cryptocurrency miners to defer tax payments for some activities, perhaps indefinitely. This step would incentivize an increase in wasteful, climate-harming mining activities, but the bill itself does nothing to address those environmental impacts, save authorizing a study.”