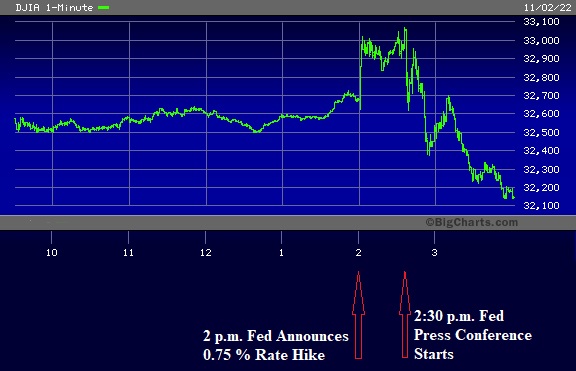 The Fed released its FOMC decision to raise interest rates by 0.75 percent at 2 p.m. yesterday, bringing its benchmark Fed Funds rate to a range of 3.75 to 4.00 percent. The decision contained this statement: “In assessing the appropriate stance of monetary policy, the Committee will continue to monitor the implications of incoming information for the economic outlook. The Committee would be prepared to adjust the stance of monetary policy as appropriate if risks emerge that could impede the attainment of the Committee’s goals.”

That statement was greeted as bullish by the stock market. As Fed Chair Jerome Powell’s press conference started at 2:30 p.m., the Dow had soared by 277 points. By 2:34 p.m., the Dow was up 400 points. But things dramatically changed when Powell started taking questions from the press. By 3:15 p.m. when the press conference ended, the Dow was down by 157 points and it continued to tumble for the next 45 minutes, ending the trading day at 4:00 p.m. with a loss of 505.44 points – a wild swing of 900 points in an hour and a half.

The market didn’t like most of what Powell had to say at his press conference, including that it he felt it was premature to be thinking about the Fed pausing its interest rate hikes. In response to a question from reporter Rachel Siegel of the Washington Post, Powell said the following:

“Let me say this. It is very premature to be thinking about pausing. So people, when they hear lags, they think about a pause. It’s very premature, in my view, to think about or be talking about pausing our rate hike. We have a ways to go. Our policy — we need ongoing rate hikes to get to that level of sufficiently restrictive and we don’t — of course, we don’t really know exactly where that is.”

Powell also conceded that hoping to guide the U.S. economy to a soft landing that avoids a recession is falling further out of the Fed’s reach. The exchange with reporter Nancy Marshall-Genzer of Marketplace went as follows:

Powell: Has it narrowed? Yes. Is it still possible? Yes. I think — we’ve always said it was going to be difficult, but I think to the extent rates have to go higher and stay higher for longer it becomes harder to see the path. It’s narrowed. I would say the path has narrowed over the course of the last year really.

Powell: Hard to say. Hard to say. Again, I would say that the sort of array of data in the labor market is highly unusual. And to many economists, there is a path to — ordinarily, there is a relationship to GDP going down and vacancies declining translating into unemployment, or there’s Okun’s law. So all those things are relationships that are in the data and they’re very real. Data’s a little bit different this time, though, because you have this tremendously high level of vacancies and we think on a very steep part of the Beveridge Curve. All I would say is that the job losses may turn out to be less than would be indicated by those traditional measures because job openings are so elevated and because the labor market is so strong. Again, that’s going to be something we discover empirically. I think no one knows whether there’s going to be a recession or not. And if so, how bad that recession would be. And, you know, our job is to restore price stability, so that we can have a strong labor market that benefits all over time. And that’s what we’re going to do.

Marshall-Genzer: But just real quickly, why do you feel like the window has narrowed?

Powell: Because we haven’t seen inflation coming down. The implication of inflation not coming down. And what we would expect by now to have seen is that as the — really, as the supply side problems had resolved themselves, we would have expected goods inflation to come down by now, long since by now. And it really hasn’t, although it’s — actually, it has come down, but not to the extent we had hoped. At the same time, now you see services inflation — core services inflation moving up. And I just think that the inflation picture has become more and more challenging over the course of this year, without question. That means that we have to have policy be more restrictive, and that narrows the path to a soft landing, I would say.

The Fed’s continuing trading scandal also came up at the Press Conference. That exchange went as follows:

Marte: Hi, Chair Powell. Jonnelle Marte with Bloomberg. So the Fed is facing two more ethics-related incidents, with the revision of the financial statements from President Bostic and President Bullard speaking at a closed event. So some senators, like Elizabeth Warren, are saying that this is a sign of greater ethics problems at the Fed. Could you talk about what this does to the public’s trust in the bank, and what the Fed is doing to prevent this kind of behavior from becoming common?

Powell: Sure. So you’re right, the public’s trust is really the Fed’s, and any central bank’s, most important asset. And anytime one of us, one of the policymakers, violates or falls short of those rules, we do risk undermining that trust. And we take that very seriously. We do. So at the beginning of our meeting yesterday, actually, we had a committee discussion of the full committee on the importance of holding ourselves individually and collectively accountable for knowing and following the high standard that’s set out in our existing rules with respect to both personal investment activities and external communications.

And we’ve taken a number of steps. And I would just say we do understand how important those issues are. I would say that our new — our new investment program that we have is up now and running. And actually, it was through that that the problems with President Bostic’s disclosures were discovered. When he filed his new disclosures, that’s — we now have a central group here at the Board of Governors that looks into disclosures and follows them, and approves people’s disclosures, and also all of their trades. Any trade anyone has to make, who is covered, has to be approved — pre-approved. And there’s a lag. It has to be pre-approved 45 days before it happens so there’s no ability to game markets.

So it’s a really good system. It worked here. And we — I think we all said to each other today — yesterday, actually — yesterday morning, we recommitted to each other and to this institution to hold ourselves to the highest standards and avoid these problems.

Marte: Do you have an update on the investigations that are pending?

As multiple Fed watchdogs have indicated, the investigation of the Fed’s trading scandal belongs with both the Securities and Exchange Commission (which can bring only civil charges) – to investigate the potential that insider trading occurred – and with the Criminal Division of the U.S. Department of Justice, to determine if the transgressions rose to the level of criminal conduct. The Fed’s Inspector General reports to the Fed’s Board of Governors, which is chaired by Jerome Powell — hardly an arms-length investigation. For an understanding of just how sweeping and serious this matter actually is, see our related articles below.

Robert Kaplan Was Trading Like a Hedge Fund Kingpin for Five Years while President of the Dallas Fed; a Dozen Legal Safeguards Failed to Stop Him

Atlanta Fed President Bought Low and Sold High in 2020 as the Fed Bailed Out Wall Street; Then He Failed to Report those Trades

The Inspector General Investigating the Trading Scandal at the Fed, Reports to Fed Chair Jerome Powell, Whose Own Trading Is Dubious