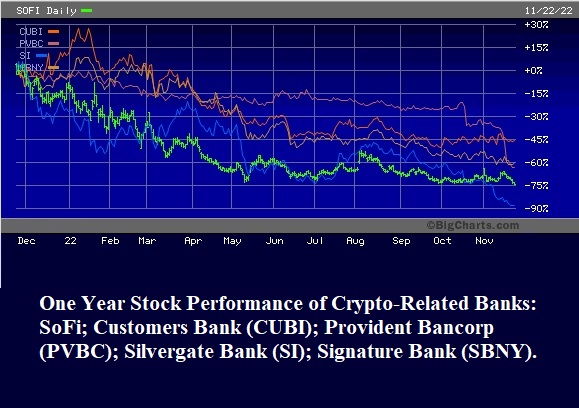 The fallout from the collapse of the crypto exchange FTX and its missing billions of dollars of customer funds has, finally, galvanized some members of Congress to push back against the swarms of crypto lobbyists whose activities are clearly impacting the safety and soundness of U.S. banks.

On Monday, Senator Sherrod Brown (D-OH), Chair of the Senate Banking Committee, along with Senators Jack Reed (D-RI), Chris Van Hollen (D-MD), and Tina Smith (D-MN), sent a letter to federal banking regulators warning that SoFi, a federally-insured bank, potentially posed a risk to safety and soundness as a result of its digital asset trading activities. The Senators wrote as follows:

“In January 2022, SoFi received approval from the Federal Reserve for the acquisition of Golden Pacific Bancorp, Inc. and a conditional approval from the Office of the Comptroller of the Currency for the creation of SoFi Bank, N.A.  SoFi completed the acquisition in February 2022. As part of the approval, the Federal Reserve provided SoFi with two years to divest from SoFi Digital Assets — a nonbank subsidiary that allows retail investors to buy and sell digital assets — or conform the subsidiary’s impermissible digital asset activities to the law. During this conformance period, SoFi has committed not to ‘expand [its] impermissible activities,’ except as specifically authorized by law. SoFi initially agreed to these terms, but since the acquisition, SoFi Digital Assets has apparently expanded its retail digital assets operations.

“Two months after receiving regulatory approval, SoFi announced a new service allowing customers of its national bank to invest part of every direct deposit into digital assets with no fees. The company publicly billed this service as ‘the latest expansion of SoFi’s offerings to make it simpler to get started with cryptocurrency investing.’ SoFi’s own investor protection materials, however, warn customers that at least one token listed on SoFi Digital Assets is ‘a crypto pump-and-dump’ hazard with ‘no special use case or features’ and that ‘[it] might be among the most high-risk endeavors an investor can take.’  Troublingly, this conduct raises questions about SoFi’s compliance with commitments made in the January 2022 approvals and to meeting its ongoing obligations as a banking organization.

“SoFi’s digital asset activities pose significant risks to both individual investors and safety and soundness. As we saw with the crypto meltdown this summer, where crypto-assets lost over $1 trillion in value in a matter of weeks, contagion in the banking system was limited because of regulatory guardrails. In the event of crypto-related exposures at SoFi Digital Assets ultimately require its parent company, bank holding company, or affiliated national bank to seek emergency liquidity or other financial assistance from the Federal Reserve or FDIC, taxpayers may be on the hook. Your agencies have publicly acknowledged these types of crypto-related risks. In fact, the Fed issued guidance detailing the risks posed by crypto-asset related activities to cybersecurity, anti-money laundering and countering of financing of terrorism efforts, consumer protection, and financial stability. Similarly, the OCC called out the volatility of crypto activities and the risks of the crypto ‘hype-driven economy’ to investors of modest means, and the FDIC issued an advisory warning of the risks to consumers when crypto companies misrepresent the availability of deposit insurance for crypto assets.”

You can read the letter to the banking regulators here and the very strong letter to SoFi’s CEO, Anthony Noto, here.

How did the U.S. banking system become the playground of crypto billionaires? The answer is that they had a lot of help from some Republican members of Congress who sit on the Senate Banking and House Financial Services Committees. We have, to our repulsion, watched these Senators and Reps shill for the crypto industry during hearings for years as if they are actually the industry’s registered lobbyists. See our report: As Bitcoin Crashes 34 Percent in a Week, U.S. Congressman Ted Budd Pushes Bank Regulator to Approve More Crypto National Bank Charters. (God help us all, Ted Budd (R-NC) was elected as a U.S. Senator from North Caroline in the midterm election this month.)

Another big shill for the crypto industry is Pat Toomey (R-PA), who, thankfully, has decided to retire from Congress. This is what Toomey had to say about crypto at a Senate Banking hearing last week:

“I want to follow up on a comment the Chairman made. I think I heard the Chairman refer to crypto as ‘risky new financial products’ and the insinuation was that they might have the ability to crash our financial system.

“I think there’s a really important distinction that I want to underscore here. If you look at what happened with FTX, at least what appears to have happened by a very extensive coverage, this is fundamentally not about the kind of assets that were held by FTX. It’s about what individuals did with those assets.

“There are a lot of corollaries. There are a lot of analogies here. One comes to mind. In 2011 MF Global commodity brokerage firm, it was run by former New Jersey Senator Jon Corzine. It collapsed after customers funds were misappropriated to fill a shortfall caused by the firm’s exposure to some trading that went south. Now, nobody suggested that the problem was the instruments that were used. The problem was the use of customers funds. Similarly, the 2008 financial crisis involved disastrous consequences with what people were doing with mortgages. Did we decide we gotta ban mortgages? Of course not.”

Toomey, like most other crypto shills, has the ability to sound like he’s making the most sensible arguments that any intelligent person could make. But on closer examination, every single point he makes in the three paragraphs above collapses as quickly as FTX.

What Sam Bankman-Fried, co-founder and CEO of FTX, did with the help of his closest colleagues, was to create their own magic money. It was a crypto token called FTT. It was backed by nothing more than the hyped reputation of FTX, its celebrity endorsers, and the fawning media’s coverage of faux billionaire Sam Bankman-Fried. In that sense, FTT functioned much like the “stock” of FTX.

The price of FTT soared through a buying binge between FTX and Bankman-Fried’s own hedge fund, Alameda Research. FTT’s price went from less than $4 in December 2020 to more than $84 in September 2021 – a 2,000 percent gain in less than a year. FTT is trading at $1.29 this morning.

CNBC explains what was going on with the FTT token as follows:

“The source explained that Alameda could post the FTT tokens it held as collateral and borrow customer funds. Even if FTX created more FTT tokens, it would not drive down the coin’s value because these coins never made it onto the open market. As a result, these tokens held their market value, allowing Alameda to borrow against them – essentially receiving free money to trade with.

“FTX had been able to sustain this pattern as long as it maintained the price of FTT and there was not a flood of customer withdrawals on the exchange. In the week leading up to the bankruptcy filing, FTX did not have enough assets to match customer withdrawals, the source said.”

Reuters reported that Bankman-Fried had moved as much as $10 billion of FTX customers’ money to his hedge fund, Alameda Research, through a “backdoor” in its software. Alameda lost much of the money on wild bets while $1 billion to $2 billion had just “disappeared,” according to Reuters. The Financial Times reported that FTX held just $900 million “in easily sellable assets” against $9 billion “of liabilities the day before it collapsed into bankruptcy.”

To attempt to equate what FTX was doing with commodity markets or mortgages is a clever sleight of hand by Toomey. But it fails miserably. Commodities have traded on exchanges for centuries. Home mortgages have been used in the U.S. since the 1930s. Crypto is new and risky and unstable and based on nothing more than thin air in most cases and has been collapsing since almost the moment it was introduced.