Sheila Bair, Former Chair of the FDIC, Is Now an “Organizer/Director” of a Cayman Islands Crypto Company that Got a U.S. National Bank Charter Last Year 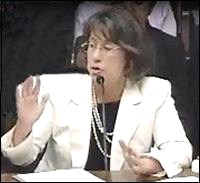 On November 17, Sheila Bair, the former Chair of the Federal Deposit Insurance Corporation (FDIC) during the financial crisis of 2008, went on CNBC to lament the lack of controls leading to the collapse of the crypto currency exchange, FTX. During the interview, Bair used the phrase “nobody looking behind the curtain.”

But Bair, herself, is listed as an “Organizer/Director” of a crypto-related company called Paxos, where nobody can genuinely look behind the curtain because its parent, Kabompo Holdings Ltd., is based in the offshore secrecy jurisdiction of the Cayman Islands. According to the bare bones filings Kabompo has made with the Securities and Exchange Commission each time it has raised money from private investors, it has used an address that is a Post Office Box at Ugland House in Grand Caymen. According to a previous report from the Government Accountability Office, the audit arm of Congress, Ugland House is home to 18,857 corporations. In 2009, President Obama called it either “the largest building in the world or the largest tax scam in the world.”

Despite the dark curtain that Ugland House draws around the corporations housed there, the Office of the Comptroller of the Currency, the regulator of national banks in the United States, granted Paxos conditional approval to operate a national bank, Paxos National Trust, on April 23 of last year. The national bank charter will allow Paxos National Trust to operate in all 50 states without getting separate approvals from the individual states. The OCC’s letter to Paxos that details the conditional approval contains the following breathtaking paragraph:

“The Bank will be an uninsured national bank whose operations will be limited to those of a trust company and activities related thereto. The Bank will provide a range of services associated with digital assets that are permissible for a national bank, including custody services for digital assets; custody and management of USD stablecoin reserves; payment, exchange, and agent services; other cryptocurrency services, such as trading services and enabling partners to buy and sell cryptocurrency; and ‘know your customer’ as a service, which includes customer identification, sanctions screening, enhanced due diligence, customer risk rating, and other related services. These activities are currently being conducted by Paxos Trust Company, LLC, a New York-chartered limited liability trust company (Paxos Trust Company). The Bank and Paxos Trust Company will be affiliates and direct wholly owned subsidiaries of Kabompo Holdings Ltd., Grand Cayman, Cayman Islands (Kabompo).”

Let this sink in for a moment. The OCC is willing to allow a company whose parent is housed in a secrecy jurisdiction to conduct “know your customer” activities “as a service” and engage in a sprawling range of crypto activities – despite crypto being called a scam or a sham by a growing list of veteran investors, academics and computer scientists.

Legendary investor Warren Buffet has called the largest cryptocurrency, Bitcoin, ‘rat poison squared’; global economist, Nouriel Roubini, told the Senate Banking Committee in 2018 that ‘Crypto is the Mother of All Scams and (Now Busted) Bubbles While Blockchain Is The Most Over-Hyped Technology Ever, No Better than a Spreadsheet/Database.’ More recently, Bill Gates, co-founder of Microsoft, one of the most valuable tech companies in the world, stated that cryptocurrencies are ‘100% based on greater fool theory.’ And just this past June 1, more than 1,600 scientists and software engineers wrote to Committee chairs in Congress to warn that both crypto and blockchain are shams.”

Paxos also appears to have run amok of the FDIC’s rules on using the imprimatur of the FDIC to make its stablecoins appear to have the backing of federal deposit insurance from the FDIC. (See screen shot below taken from the Paxos website yesterday morning.) The most brazen sentence on the Paxos web site is this: “Paxos maintains FDIC-insured deposits for stablecoins at the following depositories:” 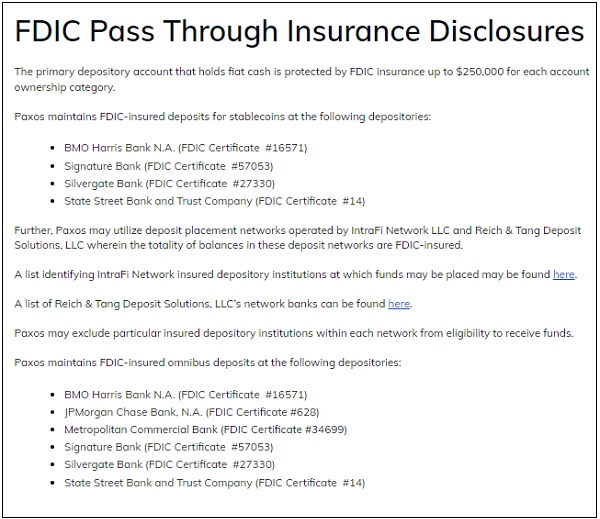 In August the FDIC wrote to five crypto firms to warn them that they were illegally using the name of the FDIC. One of the firms was the now collapsed FTX crypto exchange where billions of dollars of customer funds are now missing. The FDIC letter to FTX included the following passage:

“You shall immediately remove any and all statements, representations, or references that suggest in any way, explicitly or implicitly, that: (a) FTX US is FDIC-insured; (b) any FTX US brokerage accounts are FDIC-insured; (c) any funds held in cryptocurrency or other financial products such as stocks, bonds, money market mutual funds, other types of securities or commodities are or can be protected by FDIC insurance; or (d) FDIC insurance provides protection or coverage in any manner or extent other than those set forth in the FDI Act….”

On October 20, the acting Chairman of the FDIC, Martin Gruenberg, gave a speech at the Brookings Institution that explained how misleading statements that invoke the name of the FDIC may have lured customers to use crypto when they would not otherwise have done so. Gruenberg stated:

“In other cases, customers may have fundamentally misunderstood the risks associated with investment in various types of crypto–assets, calling into question whether consumer disclosures and other important consumer safeguards are appropriately implemented within the crypto–asset marketplace.

“Insured institutions need to be aware of how FDIC insurance operates and need to assess, manage, and control risks arising from third–party relationships, including those with crypto companies. In addition to potential consumer harm, customer confusion can lead to risks for banks if a third party with whom they are dealing, makes misrepresentations about the nature and scope of deposit insurance. The FDIC issued an Advisory in July reminding insured banks of the risks that could arise related to misrepresentations of deposit insurance by crypto–asset companies.”

As the former Chair of the FDIC, Sheila Bair would not be able to mount a credible legal defense as to how a company of which she is listed as an “Organizer/Director” is misusing the imprimatur of the FDIC.

The OCC letter acknowledging its conditional approval of the national bank charter to Paxos indicates that a copy was sent to Michael Nonaka, Co-Chair of the Financial Services Group at the law firm Covington & Burling. (That law firm conspired with Big Tobacco for decades to hide the health risks from cigarettes. According to a decision handed down by Federal court judge Gladys Kessler, Covington & Burling’s relationship with Big Tobacco went far beyond the typical attorney-client relationship. The firm set up front groups to hide the coordination of Big Tobacco in promulgating fake science on the health risks of second-hand smoke.)

Eric Holder, U.S. Attorney General under President Obama, and Lanny Breuer, head of the criminal division of the Justice Department under Holder, also hailed from Covington & Burling. Both failed to prosecute any key executive of a major Wall Street bank for the crimes that led to the 2008 financial crises that devastated the finances of millions of Americans, despite criminal referrals from the Financial Crisis Inquiry Commission.

Covington & Burling unabashedly brags about its revolving door relationships, writing as follows on its website about its blockchain team:

“Our team includes more than 120 former government and enforcement officials, including the former U.S. Attorney, a former Prime Minister, and a member of the UK House of Lords, who can offer our clients exceptional insight as they navigate complex regulatory, legal, policy, and litigation issues relating to the adoption of disruptive technologies. We provide comprehensive, interdisciplinary advice to clients looking to acquire, adopt, evaluate, or litigate matters relating to distributed ledger technology.”

The global reputation of the U.S. financial system is rapidly going down in flames from these so-called “disruptive technologies” as celebrities, former regulators, law firms and members of Congress accept the financial largesse crypto firms are throwing around.

It also appears that the journalism profession may have been similarly co-opted. One of the five letters that the FDIC sent in August, warning about illegal use of the FDIC-insurance protection imprimatur, went to a firm called SmartAsset. The website of SmartAsset had published an article written by a “freelance reporter” named Eric Reed. The title of the article was: “List of FDIC-Insured Crypto Exchanges.” (The Wayback Machine has archived the article. Give it a minute or so to load.) Since the FDIC is not legally allowed to insure any crypto exchange, the entire premise of the article was bogus. Among those Reed listed as an insured crypto exchange is the colossal fraudster, FTX. Reed writes that FTX is “insured for investors who trade with FTX.us” Today, FTX.US is in bankruptcy proceedings along with more than 100 other FTX affiliates with a reported $8 billion of customer money missing.” Gemini, which has halted customer withdrawals on its “Earn” program, is also listed by Reed as “Insured.”

Reed’s bio notes that he writes “sponsored content” and that he also works “with content teams at leading newsrooms and private firms looking to grow their message. I specialize in thought leadership, corporate newsrooms and client communications in high-complexity fields such as policy, law, finance and technology.”