Here’s What Americans with Security Clearances Are Saying About Trump’s Stash of Top Secret Documents at His Resort Hotel, Mar-a-Lago 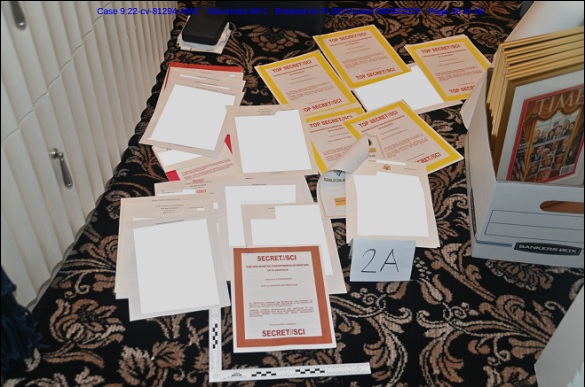 The above photo was released on Wednesday evening as part of the Justice Department’s court response to Donald Trump’s motion to have a Special Master appointed to review documents seized by the FBI in a raid of his 114-room resort hotel, Mar-a-Lago, in Palm Beach, Florida on August 8. Included in the items seized by the government were highly classified documents marked Top Secret/SCI – meaning they were Sensitive Compartmented Information that should have been maintained in a government approved SCIF – Sensitive Compartmented Information Facility.

The FBI’s raid of Mar-a-Lago on August 8 followed months of stonewalling by Trump to return government records he had illegally retained after leaving the White House. The records were first demanded by the National Archives. When the National Archives finally received 15 boxes from Trump of improperly taken documents in January, it discovered highly classified material in the boxes and turned the matter over to the Justice Department. Correspondence documenting Trump’s months of stonewalling is attached as exhibits to the Justice Department’s court filing linked above.

There had already been an outpouring of disgust on Twitter over Trump’s illegal taking of classified documents to an oceanfront resort that functions as an event venue for thousands of people each year. That anger has now reached a crescendo with the release of the FBI photo showing how many Top Secret documents Trump was hoarding after his attorney had certified under oath in writing that no other classified documents remained at Mar-a-Lago.

“(I first received a security clearance at age 17. Over the decades I’ve been cleared for the most sensitive compartmented secret material. Trump created a massive threat to US security.)”

“I had a security clearance prior to being in Congress. And as a Member of Congress, I have a top secret security clearance. Let me be clear: if I went through classified documents and kept 300 of them in my home, I would be arrested immediately and indicted.”

Tom Nichols, a staff writer at the Atlantic posted this on Twitter:

“I had a security clearance for most of the past 30 years. I know I’d have been frog-marched out and held for doing a fraction of what Trump did.”

Below Nichols’ Tweet is a video clip of House Rep-elect, Pat Ryan, who recently won a special election for New York State’s 19th Congressional District. The video clip shows Ryan being interviewed on an MSNBC news program. Ryan calls Trump’s behavior “traitorous” and adds: “I had a Top Secret clearance. I was an Army officer. If I had done what he did I would have been in jail. 100 percent.”

The most vehement outcry on Twitter is coming from former members of the military who are outraged that Trump has not already been arrested for the illegal taking of these documents and their haphazard storage.

“Again, as a Veteran, w/a former top level security clearance, seeing TOP SECRET,SECRET, NOFORN, HCS, SI, documents laying on a closet floor, it is clear to me: Trump needs to be arrested NOW!”

“I had a TS/SCI clearance for 19 years and this photo absolutely sets me off. This is absolutely insane.”

“I had a security clearance when I was active duty. I was always so careful with what I talked about, with ensuring proper storage of documents because I cared about national security, even if my part was tiny. The thought of highest level secret docs being seen by ?? I’m livid!”

There are hundreds of other people expressing outrage on Twitter that Trump has not been arrested. If I had a Twitter account, I would be one of them. I previously had security clearance to read and edit classified material for our government, which invariably involves protecting the lives of fellow Americans.

In my early twenties, after passing multiple background checks, I became part of a group of editors for a subcontractor to the Navy to edit the equipment manuals for the Polaris and Poseidon nuclear missile class of submarines. The manuals did not have the highest security classification, “Top Secret,” but one below that, “Secret.”

While many paragraphs in the manuals were not classified, when there was even one page or paragraph or sentence that was classified, the entire manual became classified. In other words, the document takes on the classification of its most sensitive part.

Myself, my colleagues and my superiors took national security very seriously. Our pencils were stamped with “Loose lips sink ships.” Failing to spot even a typo within the text of the manuals was grounds for immediate termination. When we left our workspace for the day, the manuals were locked in file cabinets with heavy steel bars across the front and impregnable locks. The facility itself was under round-the-clock security.

This latest threat to America’s national security is the result of Americans tolerating unbridled dark money in our elections, which serves up questionable candidates backed by unknown sources of money. The 2016 presidential election offered voters a choice of Hillary Clinton, who was under an ongoing criminal investigation by the FBI for her negligent handling of classified material on a private server in the basement of her home, or Donald Trump, a man being called a fraud and a con man by his own party. The New York Times editorial board called Trump “a shady, bombastic liar” while the Los Angeles Times editorial board correctly deduced that Trump was “not fit” to be President.

Americans appear to have finally awakened from their slumber to the metastasizing threats emanating in all directions from our failure to reform campaign financing laws. Trump is Exhibit A in how campaign financing is rotting our democracy.