Mar-a-Lago: Thousands of People of Questionable Character Have Visited this Resort/Hotel in the 18 Months That Trump Stashed Top Secret Documents There 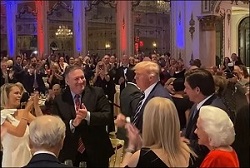 The narrative that the FBI took the unprecedented step of raiding former President Donald Trump’s “home” on August 8 has misdirected the media debate that should be happening right now. The majority of Americans hear the word “home” and think of a private residence where one family resides. But the property raided on August 8 by the FBI was Mar-a-Lago – which has as much resemblance to a private residence as Palm Beach International Airport has to a private airplane hangar.

Yes, it’s true that there are private quarters located at Mar-a-Lago for Trump and his family. But it’s also true that this is a 114-room oceanfront resort and hotel that sells memberships, rents hotel rooms and suites, and holds a multitude of events. The official website for Mar-a-Lago explains its event offerings as follows:

“Important occasions call for settings that inspire, enchant and exceed every expectation. Whether you are planning a gala for your favorite charity, the perfect Palm Beach wedding or an intimate party for close friends, the Mar-a-Lago Club has the most extraordinary setting that will suit your every need. Our Donald J. Trump Grand Ballroom is perfect for large galas, weddings, or bar/bat mitzvahs. For smaller soirées, we can offer the elegant White & Gold Ballroom or an incredible cocktail party under the stars poolside. Whatever the occasion, our Catering Director will be happy to assist you and make your event singularly exquisite and forever memorable.” 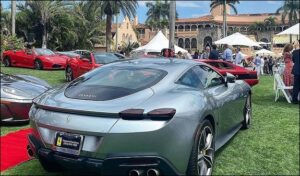 Two large events at Mar-a-Lago that attracted thousands of people during the 18-months that the national security of the United States was put at risk by the housing of Top Secret government documents there were the annual “Palm Event: Celebrating Motorsports.” This is an event to show off expensive sports cars. Attendees include ticket holders as well as vendors, sponsors, Mar-a-Lago members and their guests, catering staff and resort staff. In other words, thousands of people roaming around a facility that holds Top Secret documents that might endanger the national security of all Americans. The events occurred on March 21, 2021 and again on March 18-20, 2022 at Mar-a-Lago. You can watch a video clip of the dense crowds on the grounds at Mar-a-Lago at the 2022 Palm Event here. (Be sure to turn on the video sound to catch the gleeful exclamation that there is a woman decked out as a mermaid in the Mar-a-Lago pool.)

Another event which should raise security alarm bells was the May 4, 2022 screening at Mar-a-Lago of the Dinesh D’Souza documentary “2,000 Mules” – the latest in a steady stream of conspiracy films attempting to gin up Trump’s base with the assertion that the presidential election was stolen from him. This event seems to have gone out of its way to include Trump supporters with past brushes with the law – just the sort of folks you want hanging around improperly stored Top Secret government documents.

Michael Flynn attended the screening. Flynn was Trump’s first National Security Advisor who ended up pleading guilty to lying to the FBI about communications with the Ambassador to Russia. Flynn received a pardon from Trump.

Also present at the screening was Kyle Rittenhouse, the teen acquitted for killing two men during the 2020 protests in Kenosha, Wisconsin. The protests arose from the police shooting of a black man, Jacob Blake. Rittenhouse became the darling of the right-wing crowd for heading into the protests with an AR-15 style rifle and joining up with other armed white men in Kenosha who said they were there to protect local businesses.

Another person at the screening was Bernie Kerik, the former New York City Police Commissioner who served under former New York City Mayor Rudy Giuliani. Kerik pleaded guilty in 2009 to eight felony tax and false statement charges, including two counts of tax fraud. He was sentenced to 48 months in federal prison and three years of supervised release.

Tina Peters also attended the screening. Peters is the embattled Mesa County, Colorado Clerk and Recorder who was indicted in March of this year on 10 counts related to an investigation into election equipment tampering.

We could go on but you get the picture.

In addition to the above events, Trump has held an endless series of political fundraising galas at Mar-a-Lago since he left office on January 20, 2021 – 14 days after he staged the worst insurrection at the U.S. Capitol since the British invaded it in 1814.

A small sampling of the political fundraisers includes the following:

February 23, 2022: An event at Mar-a-Lago dubbed “Take Back Congress Candidate Forum.” It highlighted GOP candidates that Trump had endorsed in the midterms and came with hefty entrance fees. The cheapest ticket for a couple was a reported $5,000 while a package with a photo op with Trump cost $100,000. If you were among the first 10 to pay for the top $250,000 package, you got a photo with Trump, a private dinner, and an option to enjoy a two-night stay at the Mar-a-Lago resort.

March 10, 2022: According to the Missouri Times, Missouri Attorney General Eric Schmitt held a fundraiser at Mar-a-Lago and raised $1.6 million. Schmitt won the Republican primary in the U.S. Senate race in the state.

March 16, 2022: Trump hosted a fundraiser for Georgia gubernatorial candidate, David Perdue, who was challenging incumbent Governor Brian Kemp in the primary. For $24,200 in donations, you could get a photo of yourself with the two of them according to an ad on Twitter. The entrance fee was $3,000 per person. Despite Trump’s endorsement, Perdue was trounced by more than 50 points in the primary, with Kemp gaining 74 percent of the vote to Perdue’s 22 percent.

Mar-a-Lago was raided on August 8 because Trump, and potentially others, are under federal investigation for potential violations of the Espionage Act, which makes it unlawful to spy for a foreign country or mishandle defense information.

Why it took the Justice Department until August 8 to get its act together and retrieve another 21 boxes of documents under a search warrant, deserves its own independent investigation. According to court material released thus far, included in those 21 boxes was Top Secret information as well as documents marked Top Secret/SCI – Sensitive Compartmented Information, meaning that the documents were only allowed to be viewed in a Sensitive Compartmented Information Facility (SCIF). That’s a far cry from storing these documents at a beach resort trafficked by former felons and indicted individuals.