As long-term readers of Wall Street On Parade know well, we have regularly warned that the failure of Congress to meaningfully reform Wall Street by restoring the Glass-Steagall Act poses a national security threat to our nation in times of crisis.

Instead of meaningful reform, Congress has stood by and watched the Fed bail out the global banks repeatedly since 2008 – either with direct loans or by keeping interest rates artificially low (“administered rates”) or through trillions of dollars in asset purchases from the banks (what the Fed prefers to call Quantitative Easing).

The Fed’s balance sheet has ballooned from less than $1 trillion before the financial crisis in 2008 to $9 trillion today as a result of its willingness to perpetually bail out Wall Street. American taxpayers are on the hook for 98 percent of the Fed’s balance sheet and thus have a critical interest in demanding both transparency and accountability from the Fed.

In the fall of 2019 there was no war in Ukraine, there was no pandemic. But for still undisclosed reasons, the Fed decided to funnel trillions of dollars in cumulative repo loans to the trading units of U.S. megabanks and their foreign counterparties. The Fed’s repo loans stretched from September 17, 2019 through July 2, 2020. The Fed has begun releasing the names of the banks and the amounts they had borrowed on a quarterly basis, following a two-year lag. There has been an unprecedented mainstream media news blackout of this information.

As the chart below shows, the six largest borrowers in terms of cumulative repo loans from the Fed’s bailout program in the last quarter of 2019 were the trading units of Nomura, JPMorgan, Goldman Sachs, Barclays, Citigroup, and Deutsche Bank. (The trading unit of the French global bank, BNP Paribas, made it into the top six borrowers for the first quarter of 2020.)

Flash forward to the present. The U.S. is now dealing, simultaneously, with a pandemic, an illegal bombing campaign and invasion of Ukraine by Russia, soaring inflation at home, and the share prices of Wall Street and foreign global banks tanking.

As the two charts below indicate, the same Wall Street banks and their foreign derivative counterparties that the Fed was bailing out in the last quarter of 2019 and the first quarter of 2020 have experienced dramatic deterioration in their share prices year-to-date. 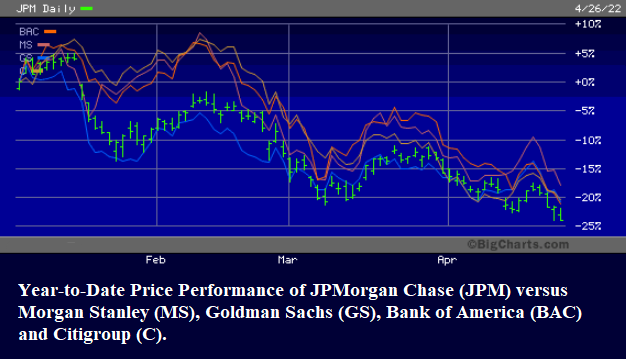 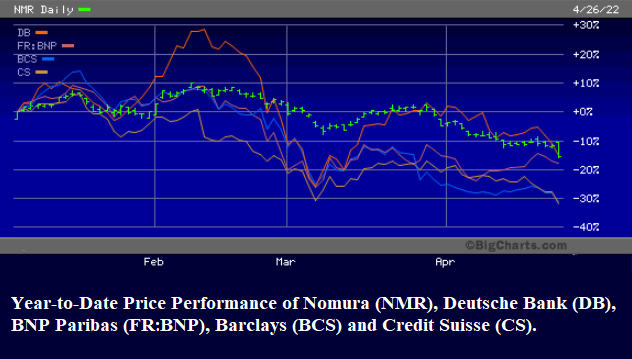 The Office of Financial Research (OFR) has warned since 2016 that the Fed was not paying proper attention to the systemic risk posed by global banks that were heavily interconnected via derivatives. OFR researchers, Jill Cetina, Mark Paddrik, and Sriram Rajan, produced a study in 2016 that illustrated how the Fed’s stress tests failed to capture the systemic risk. The problem, according to the researchers, is not what would happen if the largest counterparty to a specific bank failed but what would happen if that counterparty was also a major counterparty to other systemically important global banks.

The researchers wrote that the Fed’s stress test “looks exclusively at the direct loss concentration risk, and does not consider the ramifications of indirect losses that may come through a shared counterparty, who is systemically important.” The researchers explained:

Based on the way these global, interconnected banks have been trading since the start of this year, it would appear that the Fed, and Congress, have failed to meaningfully address this critical problem.