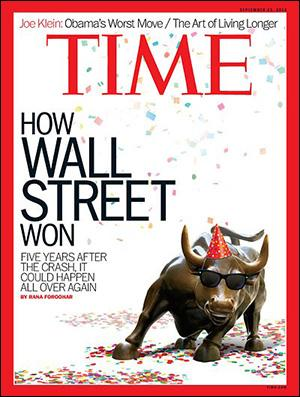 The September 23, 2013 cover of Time Magazine was adorned with the iconic Wall Street bull in a party hat, with celebratory confetti floating from the sky. In sleek bold type, Time declared, “How Wall Street Won – Five Years After the Crash, It Could Happen All Over Again.”

President Obama was so nonplused with the cover and the dire prophecy that he took to the airwaves, challenging the assertion with George Stephanopoulos on ABC’s This Week. Here’s the exchange from the official ABC transcript:

GEORGE STEPHANOPOULOS: This– this weekend, fifth anniversary of the collapse of Lehman.  A lot of people say that was the acceleration.

GEORGE STEPHANOPOULOS: Accelerated the financial crisis.  Five years out, let’s take stock.  You know, I’m lookin’ at the cover of Time Magazine this week.  It says, “How Wall Street Won.”  And we’ve got polls showing that, you know, two thirds of the country still think we’re going in the wrong direction, think the economy is no more secure.  What do you say to those Americans who think Wall Street is winning but they’re not?

PRESIDENT BARACK OBAMA: Well, let’s think about where we were five years ago.  The economy was on the verge of a great depression.  In some ways, actually, the economic data and– the collapse of the economy was worse than what happened– in the 1930s.  And we came in, stabilized the situation.  We’ve now had 42 straight months of growth, seven and a half million new jobs created, 500,000 jobs in manufacturing, 370,000 jobs in an auto industry that– had completely collapsed. The banking system works.  It is giving loans to companies who can get credit.  And so we have seen, I think undoubtedly, progress across the board.  The housing market– has recovered.  But what is also true is we’re not near where we need to be.  And– part of it has to do with a whole bunch of long term trends in the economy, where– the gains that we’ve made in– in productivity and people working harder have all accrued to the– people at the very top, will average–

GEORGE STEPHANOPOULOS: 95% of the gains to the top 1%.  That is so striking.

What we have in this striking exchange is proof that the former community organizer for low income folks in Chicago, the former editor of the Harvard Law Review, the Commander in Chief of the largest military on the planet, and the leader of the free world, knows beans about banking and Wall Street — or has chosen to wear blinders. (The latter has long been the suspicion of Wall Street on Parade.)

It is impossible for anyone to state, as the President did, that “The banking system works,” and then concede in the next breadth that all the gains are going to the people at the top. This is not a banking system – this is an institutionalized, legalized, mechanized, wealth transfer system bearing the imprimatur of the President of the United States and the U.S. Congress through their refusal to take the simple measure that can stop the looting in its tracks – the restoration of the Glass-Steagall Act.

It is impossible for the President to say with any plausible sincerity that “The banking system works,” when the country’s largest bank, JPMorgan Chase, is in the newspapers day after day for ripping off electric customers, credit card customers, mortgage bond investors, depositors, and deceiving regulators.

According to the Federal Deposit Insurance Corporation (FDIC), as of June 30, 2013, there were 5,980 commercial banks in the U.S. and 960 savings institutions, or a total of 6,940 deposit taking institutions receiving tax-payer subsidized FDIC insurance. Out of the 6,940 banks holding $5.966 trillion in deposits, just three Wall Street banks control $2.539 trillion of those deposits – an insane 41 percent of the holdings in all 6,940 banks. Those three banks are JPMorgan Chase, Citigroup’s Citibank, and Bank of America – the same three Wall Street banks serially being charged with crimes against the public.

When America collapsed into the Great Depression after the 1929 Wall Street crash, it had none of the safety nets that we have today to soften and stem the decline. The Social Security Act, federal deposit insurance on bank accounts, state unemployment insurance laws all were first enacted during the 1930s in the midst of the Great Depression.

The fact that the U.S., thus far, is struggling to climb out of the Great Recession instead of the Great Depression has zero to do with success at repairing the Wall Street banking system that crashed the economy. Instead, it has everything to do with having those safety nets already in place and massive stimulus spending on the part of the Federal government. But that stimulus has come at a terrible price: we have buried the next generation under a $16 trillion debt tab that continues to grow with no end in sight.

Reduced to its most basic terms, Wall Street banking circa 2013 works like this: a handful of Wall Street titans who are hell bent on making the Forbes list of billionaires via stock option schemes and obscene bonuses have scooped up $2.539 trillion of the life savings of Americans by spreading bank branches around the country and running multi-billion dollar ad campaigns. Instead of finding its way into productive uses, large amounts of those deposits are being leveraged into wild betting schemes on derivatives, stock and commodities trading, hedge fund lending and other imprudent risk-taking acts. This is a replay of the late 1920s Wall Street – getting personally rich while gambling with other people’s money.

A bipartisan group of Senators, including Elizabeth Warren and John McCain, have introduced legislation to reinstate the Glass-Steagall Act, which would remove insured deposits from the Wall Street gambling casino. If President Obama genuinely cares about the kind of society he will leave as his legacy to his two young daughters, he will remove his blinders and get behind this legislation.