The Wall Street Journal’s Editorial Page Is Back to Propping Up Bad Actors: This Time It’s the Wife of Clarence Thomas 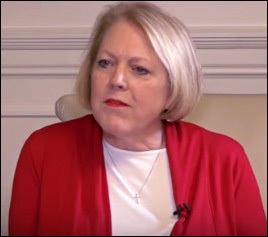 While the vast majority of news outlets around the country are calling for Supreme Court Justice Clarence Thomas to recuse himself from cases involving the January 6 attack on the Capitol, the Wall Street Journal’s Editorial Board has penned this headline today over yet one more of its radical-right editorials: “Justice Thomas Shouldn’t Recuse.” (We’d link to the article but there’s a paywall.)

To support its position, the Wall Street Journal Editorial Board writes this about the wife of Clarence Thomas, Ginni (Virginia) Thomas, whose recently released emails to Trump-era White House Chief of Staff Mark Meadows have exposed her as attempting to steer the White House in how to overturn the election of Biden:

“The right answer is that Ginni Thomas is no threat to the Court, no matter how bizarre her views about the 2020 election. She doesn’t sit on the Court, and there is no reason to believe her personal political views influence the judicial impartiality of Justice Thomas.”

It’s not the “views” of Ginni Thomas that need to stand trial. It’s her decades of money-grubbing behind a dark curtain – money that has benefitted her husband as well – as he sat on the highest court in the land for the past three decades.

If you’ve been listening to TV news lately, you’ve heard that Ginni Thomas had received $680,000 from the right-wing Heritage Foundation and her husband had failed to report it on his financial disclosure forms at the Supreme Court. Wall Street On Parade got our hands on the public tax filings of the Heritage Foundation from 1999 through 2007 and the amount paid by the Foundation to Ginni Thomas was actually $1,051,214. Clarence Thomas was forced to amend years of his financial disclosure reports in 2011, which note in bold that falsification of the information on the report “may be subject to civil and criminal sanctions.”

The Heritage Foundation has been heavily funded over the years by the billionaire Koch brothers, Charles and David. (David Koch died in 2019.) Charles Koch and David’s heirs are the majority owners of the fossil fuels conglomerate, Koch Industries. Greenpeace calls the Heritage Foundation “Koch Industries’ Climate Denial Front Group” and reports that it has received $6,130,201 from Koch foundations from 1997 through 2017. That funding is just the tip of the iceberg, however. Tens of millions more have come from the Koch network, a group of super wealthy corporate heirs who meet semi-annually to strategize on how to put their sycophants in Congress and the White House.

Fourteen days after the attack on the Capitol, Wall Street On Parade documented that at least three of the front groups that fomented the Big Lie that the 2020 presidential election had been stolen from Trump and that actively solicited thousands of people to turn out for the January 6 event at the Capitol, were funded by Koch Industries or its front groups. Ginni Thomas was present on the grounds of the Capitol on January 6.

In the emails that Ginni Thomas sent to Trump’s Chief of Staff, Mark Meadows, one of the people that she told Meadows to listen to was attorney Cleta Mitchell – a woman who has both a longstanding association with Ginni Thomas as well as with Koch front groups. Trump’s phone log for January 6 shows that Cleta Mitchell was one of the people that Trump spoke with at 7 :53 p.m. on the evening of the attack on the Capitol.

Cleta Mitchell has been in the news previously as the lawyer who was on the January 2, 2021 call with Donald Trump when he phoned the Secretary of State of Georgia, Brad Raffensperger, and told him: “I only need 11,000 votes. Fellas, I need 11,000 votes. Give me a break.” That call took place two months after the presidential election. (Mitchell stepped down from her long-term employment at law firm Foley & Lardner after her presence on that call was made public.)

Cleta Mitchell is also the attorney who filed an amicus brief in the Citizens United case before the Supreme Court that was decided on January 21, 2010. That case would be the tipping point to allow unlimited sums from corporations – like Koch Industries — in U.S. elections.

Just eight days after Justice Thomas voted in favor of that decision to open the floodgates to corporate money in campaigns, Cleta Mitchell made a move that looked very much like a quid pro quo to Ginni Thomas. Mitchell, then still a partner at Foley & Lardner, filed an application with the Internal Revenue Service to set up a nonprofit called Liberty Central, Inc. on behalf of Ginni Thomas. According to IRS tax filings, Liberty Central received a combined $1.478 million from dark money donors in 2009 and 2010.

On the IRS tax filings for Liberty Central for 2009 and 2010, Ginni (Virginia) Thomas is listed as President and CEO. The 2010 tax filing shows that Ginni Thomas received $120,511 in compensation from Liberty Central that year. She eventually stepped down from an official post at the nonprofit, stating she would serve as a consultant.

Liberty Central had the fingerprints of Charles Koch all over it. Acting as General Counsel in 2010 for Liberty Central was a former lawyer for the Charles G. Koch Foundation, Sarah Field. A former Koch lobbyist, Matt Schlapp, served on the Board of Liberty Central at inception.

Mitchell was a former lobbyist at the federal level in years 2005 through 2008 for the Alliance for Charitable Reform, a project of The Philanthropy Roundtable, another tax-exempt organization. Donors Trust and Donors Capital Fund, two dark money groups which also have Charles Koch’s fingerprints all over them, were spun off from the Philanthropy Roundtable in 1999. (See our report: Koch Footprints Lead to Secret Slush Fund to Keep Fear Alive.)

The financial disclosure forms filed by Clarence Thomas show that from 2011 through 2017, Ginni Thomas received a “salary” from the Daily Caller, a right-wing spin organization founded in 2010 by Fox News commentator Tucker Carlson and former Dick Cheney aide Neil Patel. Its creation was announced at a gathering at the Heritage Foundation. The Daily Caller’s affiliated News Foundation has received funding from the Koch Family Foundations and the Charles Koch Institute.

Despite the previous scandal over Clarence Thomas failing to report that Ginni Thomas had received income from the Heritage Foundation, there are no dollar ranges listed on his financial disclosure forms to show the range of “salary” Ginni Thomas actually received from the Daily Caller from 2011 to 2017.

Jane Mayer reported at the New Yorker in January of this year that one of Ginni Thomas’ financial backers was the anti-muslim group, Center for Security Policy. Mayer writes that “in 2017 and 2018 it paid Ginni Thomas a total of more than two hundred thousand dollars” through her Liberty Consulting business. No such income is reported on the financial disclosures filed by Clarence Thomas.

For other outrageous positions that the Wall Street Journal has taken in the past, see related articles below.

Wall Street Journal: Wealth Inequality Is Your Own Dumb Fault