Donald Trump may think Russian President Vladimir Putin is a “genius” for his Ukraine strategy, but the shareholders of the largest publicly traded companies in Russia may have a different assessment today. After Putin ordered a wide scale invasion of Ukraine overnight, the Moscow Stock Exchange (MOEX) posted a notice that “it had suspended trading on all its markets until further notice.” The Russian oligarchs must have howled because a subsequent notice indicated it would restore trading at 10:00 a.m. Moscow time.

Shortly after the exchange opened, however, the U.S. dollar denominated RTS Index plunged by 50 percent and the MOEX Index had tanked by 45 percent. You can see where the indices are currently trading at this link.

The stock market pain spread across the largest publicly traded companies in Russia. Gazprom, one of the largest natural gas companies in the world, lost 54 percent during the worst part of morning trading. Rosneft, another large Russian energy company, slumped by as much as 59 percent. Novatek, Russia’s second largest natural gas producer lost 48 percent while one of the largest banks in Russia, Sberbank, plunged by as much as 47 percent.

The plunge in the stock market, together with Russia’s currency, the Ruble, hitting record lows against the Euro and the U.S. Dollar, brought in the Russian central bank, the Bank of Russia, to support the market and the currency. The Bank of Russia announced that it was banning short selling and was initiating “interventions in the foreign exchange market, extend the Lombard List [acceptable collateral for loans], and provide the banking sector with extra liquidity today.”

But the Russian central bank does not have unlimited money to support Putin’s military aggressions against a neighboring country. And with significantly broadened sanctions expected today from the U.S. and much of Europe, which are expected to further hit Russian banks and Russia’s ability to sell its debt, Putin may have created an unanticipated financial crisis at home instead of a muscular display of his military prowess.

The interventions by the Russian central bank had helped the Russian stock indices and major Russian companies trim losses somewhat by 3:20 p.m. Moscow time (7:20 a.m. in New York). (See graph below.) But what will happen when the new announcements of heavier sanctions hit the newswires throughout the day is impossible to predict. 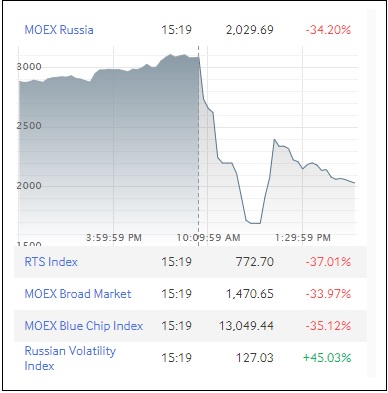