Here’s Why the Russian Sanctions Are a Dud: Big Foreign Banks from the U.S., France, Austria and Italy Are Operating in a “Routine Manner” in Russia

While Ukrainian children sleep with their pets in the subways, living in terror of the bombs raining down on them from their Russian invaders, wealthy Russian oligarchs are being comforted by “relationship managers” at banks owned by the very nations that say they are going to hold Russia accountable for its invasion of Ukraine.

Noticeably missing from President Biden’s press conference yesterday on expanded sanctions against Russia for its invasion of Ukraine was any mention of how the U.S. and its allies were going to deal with the big foreign global banks that conduct banking business for thousands of Russian corporations and millions of Russian individuals. Biden only mentioned sanctions on Russian banks.

That sent a loud message to the MOEX Index at the Moscow Stock Exchange, which as of 2:49 p.m. today in Moscow (6:49 a.m. in New York) had rallied into positive territory from a loss of as much as 45 percent yesterday, when the precise nature of the expanded sanctions were as yet unknown. (See chart below.)

One of the global foreign banks with large operations in Russia is the French global bank Societe Generale’s Rosbank. According to its website, it has 5 million individual clients in Russia and 9,000 large corporate clients. It posted a reassuring notice to its customers on its website this morning, stating that it “continues to operate in a routine manner.” It noted the following:

“Rosbank retail and corporate clients have full access to financial assets and financial banking services. We are confident in our ability to provide continuous and quality customer service and adapt where necessary, while complying with all applicable regulations.”

Another large foreign bank with large operations in Russia is Austria’s Raiffeisenbank, which has been operating in Russia since 1996. It notes on its Russian website that it is “one of 13 systemically important banks in Russia,” that it ranks number 10 by assets and number 8 by the number of retail customers. Its reginal network in Russia includes five branches and 116 outlets.

Italy’s UniCredit also has large operations in Russia. A bank spokesperson told Reuters yesterday that it “had very high provisions against possible loan losses and was ‘very liquid and self-funded.’ ” Reuters reports that UniCredit’s Russian bank is the 12th largest bank in the country with 7.8 billion Euros in customer loans at the end of last year.

As the Russian sanctions are currently structured, it’s difficult to say if the plan is to stop Russian military aggression on its neighbors or to allow foreign global banks to grab market share in Russia. 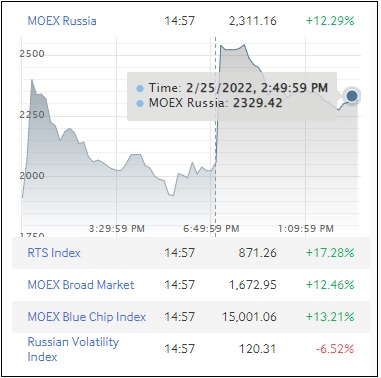