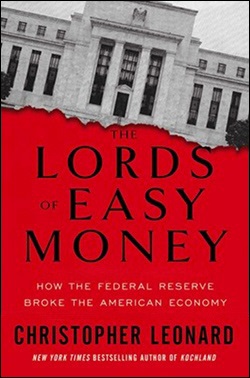 As we reported on Monday, there’s a new book out from Simon & Schuster with the provocative title: The Lords of Easy Money: How the Federal Reserve Broke the American Economy. The book, written by bestselling author Christopher Leonard, is sprinkled with eye popping revelations – particularly in regard to how hedge funds have been able to effectively mint billions by designing trades to take advantage of the Fed’s repo bailouts and quantitative easing.

Quantitative easing (QE) is a scheme launched by former Fed Chair Ben Bernanke, beginning in November 2008. QE means that the New York Fed, through its open markets desk, buys up Treasury securities and federal-agency-backed Mortgage-Backed Securities (MBS) from its 24 primary dealers. The Fed’s purchases of tens of billions of dollars a month of these securities creates artificial demand that would not otherwise exist, thus lowering the interest rates these securities need to offer, which also puts downward pressure on the interest rates of other debt instruments. This helps to sustain the Fed’s zero-bound interest rate policy on its benchmark rate, the Fed Funds rate. Bernanke promoted the plan as a way to lift asset prices and get the economy growing again after the debilitating effects of the 2008 crash. It’s been the go-to plan of the Fed ever since whenever Wall Street needs a bailout.

Interestingly, a zero-bound interest rate policy has also bailed out the hundreds of trillions of dollars (notional or face amount) of derivatives that Wall Street’s megabanks have waged with questionable counterparties that might, or might not, be able to pay up on the trades if they went sour.

Unfortunately, the dark side of QE, as cleverly detailed in layman’s terms in Leonard’s book, is that it has created a desperate struggle for yield by American savers, pension funds and other typically risk-adverse investors. The book makes the point that the long-term goal of QE was, in fact, to make saving money and expecting to earn a decent interest rate on it a fool’s errand year after year, thus forcing millions of people into riskier and riskier areas of investment, which has led to the unprecedented bubble in markets that we find ourselves in today – with no reliable exit plan by the Fed.

The Fed conducted all of these QE trades with its primary dealers, the vast majority of which are broker-dealers, meaning the trading houses on Wall Street. Most of the broker-dealers have affiliates that are commercial banks that could actually lend to the real economy, but the broker-dealers themselves are the casinos that are trading with the hedge funds.

The man behind QE, former Fed Chair Ben Bernanke, is the same man who oversaw the secret $29 trillion bailout of Wall Street during and after the 2008 crash, fought the U.S. media for more than two years to keep the details of that bailout a secret, and then took a job at hedge fund, Citadel, after retiring from the Fed.

In describing what was happening behind the scenes as QE ramped up, Leonard writes:

We asked the author, through Simon & Schuster, why he felt that the hedge funds were automatically going to make a profit selling their Treasuries or MBS to the Fed via their primary dealers. We were promised a response but none came.

We do note, however, that in the “Notes” section of the book it explains that Leonard had access to a broad section of Fed luminaries and insiders.

A key person in the book is Thomas Hoenig. Leonard indicates that he interviewed Hoenig over a five-year period, from 2016 to 2021. We checked with Hoenig’s office and were told that all of Leonard’s quotes of Hoenig’s statements in the book are accurate.

Hoenig is an insider’s insider. Hoenig was with the Federal Reserve for 38 years, first as an economist, then as a senior officer in banking supervision, and finally as a Fed Bank President for almost two decades. Hoenig led the Federal Reserve Bank of Kansas City as its President from 1991 to 2011. During that period, he rotated as a voting member of the Federal Open Market Committee (FOMC) and hosted the Kansas City Fed’s Jackson Hole economic symposium for global central bankers. Following his long tenure as a Fed Bank President, Hoenig became the outspoken Vice Chairman of the Federal Deposit Insurance Corporation (FDIC) from 2012 to 2018. The FDIC is the federal agency that oversees federal insurance on bank deposits at commercial banks and savings associations.

The publisher’s description of the book says that Leonard “infiltrates” this mysterious institution, the Fed. We’re inclined to agree. Consider what he shares at the top of page 253 regarding another type of Treasury trade by hedge funds:

“The hedge fund exploits the very tiny basis by purchasing a lot of the Treasury bills along with the futures contracts on the bills. The hedge fund then just holds on to the bills, and delivers them on the date they’re due, collecting a profit that is the basis price difference.

“This is where the repo market comes in. The profit margin on a basis trade was essentially guaranteed, but it’s small. To make the trade pay off, a hedge fund needs to make the trade thousands of times over. They used the repo market to pull this off. The hedge fund takes the Treasury bill, uses it as collateral, and gets the cash needed to load up on Treasury futures contracts. The hedge funds were able to lever up their bets by a factor of fifty to one, meaning every dollar they had allowed them to borrow fifty more dollars to use for trading. Ultimately, the hedge funds built a mutually reinforced tripod of debt and risk between Treasury bills, repo loans, and Treasury futures. It was easy money, like collecting millions of loose pennies off the sidewalk.”

The Federal Reserve confirms that hedge funds have dangerously embedded themselves in the Treasury and repo market. In a report released by the Fed on October 6 of last year, it writes:

Hoenig was one of the major dissenters on Bernanke’s QE policies. Leonard writes that “Bernanke saw Hoenig’s concerns as wrongheaded, and disarmed them masterfully by personally lobbying the other members of the FOMC.” The FOMC or Federal Open Market Committee is the group of Federal Reserve officials that vote on the major monetary policy decisions of the Fed, as well as the mandates for what the open markets desk is allowed to do at the New York Fed.

Leonard describes the relationship between Hoenig and Bernanke as “adversarial,” writing that “Years later, when Bernanke wrote his memoir, the book included relatively few mean-spirited comments, and many of them were reserved for Hoenig. Bernanke painted Hoenig as disloyal, obstinate, and maybe even a little unbalanced.”

Wall Street On Parade has written numerous articles calling out the very prudent, rational, and courageous positions of Thomas Hoenig. Bernanke, on the other hand, as the leader of the Fed, battled the media in court for more than two years rather than reveal the details of its obscene bailouts of miscreant banks on Wall Street. The media couldn’t even get Bernanke’s daily calendar without filing a Freedom of Information Act Request and, even then, it was heavily redacted.

We’ll leave it to the good judgment of our fellow Americans to figure out who the bad guy is here.