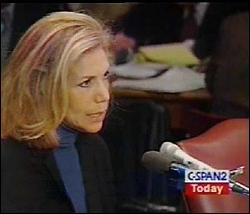 Amy G. Elliott Testifying Before the U.S. Senate Permanent Subcommittee on Investigations in 1999

Carmen Segarra, a former Bank Examiner at the Federal Reserve Bank of New York, has brought public attention to a little known job function at her former employer – that of the Relationship Manager. The New York Fed is assigned a priority role in oversight and regulation of some of the largest Wall Street banks. Should it be functioning as a tough cop or managing “relationships”?

In October, Segarra, a lawyer, filed a lawsuit alleging that Relationship Managers at the New York Fed, who were assigned to manage the relationship with Goldman Sachs, obstructed and interfered with her investigation of the firm and tried to bully her into changing her findings. When Segarra refused to change her findings, she was fired, according to the lawsuit.

The U.S. Senate’s Permanent Subcommittee on Investigations should pay close attention to the allegations in this lawsuit and open the same type of investigation it conducted in 1999 into the job function of Citibank’s Relationship Managers at its Private Bank.

The scene was set for these hearings, which were conducted on November 9 and 10, 1999, by Senator Carl Levin, who had this to say in his opening remarks:

“– two daughters of Radon Suharto, former President of Indonesia, who has been alleged to have looted billions of dollars from Indonesia; and, it appears,

Each of the Citibank clients named above had a Relationship Manager. A main focus of the hearing was on Amy G. Elliott, the Relationship Manager at Citibank who handled the Raul Salinas account. (Salinas had his murder conviction overturned on appeal and was released from prison in 2005.)

During the hearing, Robert L. Roach, Counsel to the Senate investigation, testified that the Relationship Manager’s role is to function as “in-house advocates” for the interests of their clients. Roach explained the services provided to Salinas, brother to then President of Mexico, Carlos Salinas, as follows:

“To accommodate Mr. Salinas’ desire to conceal the fact that he was moving money out of Mexico, Ms. Elliott introduced Mr. Salinas’ then-fiancee Paulina Castanon as Patricia Rios to a service officer at the Mexico City branch of Citibank. Operating under that alias, Ms. Castanon would deliver cashiers checks to the branch where they would be converted into dollars and wired into a concentration account in New York. The concentration account is a business account established by Citibank to hold funds from various destinations prior to depositing them into the proper accounts. Transferring funds through this account enables a client’s name and account number to be removed from the transaction, thereby clouding the audit trail. From there, the money would be transferred to the Trocca, Ltd. accounts in London and Switzerland…

Roach further expounded on how the Relationship Manager’s need to “please the client” trumped their responsibilities under the law, stating that “After Mr. Salinas was arrested, Hubertus Rukavina, the head of Citibank Private Bank at the time, suggested that the Salinas accounts in London be transferred back to Switzerland because they would be afforded more secrecy there.”

Amy Elliott, according to Roach, even advised Mrs. Salinas “that it might be wise to move the Trocca, Ltd. account out of Citibank because it might be more difficult for Mexican authorities to obtain account information from a non-U.S. bank.”

At one point during the hearing, Senator Levin questioned Amy Elliott on the transcript of a phone conversation she had with a colleague:

Amy Elliott: “Bill Rhodes…I am sitting four or five down from the chairman, and Bill Rhodes was and is the vice chairman of the bank. To me, that’s pretty top.”

Citigroup, the parent of Citibank, went on to become the poster child of taxpayer bailouts and hidden, off-balance-sheet debt that rendered the institution insolvent in 2008 and a ward of the taxpayer with $2 trillion in low-cost loans, $45 billion in equity infusions, and over $300 billion in asset guarantees to prop up the bank.

The mountains of hubris at Citibank and Citigroup leading up to its collapse in 2008 suggest that, just possibly, its Relationship Managers at the New York Fed might have been wearing blinders.

Relationship Managers might be appropriate positions for exclusive hotels – a super concierge service scurrying about to please high net worth guests. But on Wall Street and in private banking, it’s a job function that should have died with the release of the findings of the 1999 Senate’s Permanent Subcommittee on Investigations. The fact that the job function has now oozed its way into a major Wall Street regulator is serious cause for alarm.