The Senate Banking Committee Has Subpoena Power; So Why Has Senator Elizabeth Warren Been Left to Investigate on Her Own? 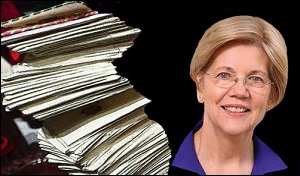 Senator Elizabeth Warren Has Sent Dozens of Letters Over the Years Probing Wall Street, Its Regulators, and the Fed

For years now, Wall Street On Parade has been reporting on the probing letters that Senator Elizabeth Warren (D-MA) has sent to Wall Street firms and their regulators in an effort to ferret out the details of systemic corruption and the looting of the American people. (See “Related Articles” below.)

Throughout this letter writing campaign, Senator Elizabeth Warren has been a member of the powerful Senate Banking Committee – which has subpoena power. The new Chair of that Committee, Senator Sherrod Brown (D-OH), is also a progressive, like Warren. So why isn’t the Senate Banking Committee using its subpoena power instead of leaving Warren with nothing more than an inquiring mind and a pile of Word documents?

According to the Congressional Research Service, the Senate Banking Committee has adopted a rule that requires a majority vote to issue a subpoena for documents or witnesses. And since it has too many members on the Committee who take campaign funds from Wall Street and/or their law firms, we’ve yet to see that subpoena power in action.

Today is the deadline that Senator Warren gave to Fed Chair Jerome Powell to respond to her letter of last Tuesday, in which she demanded “Full disclosure of all stock, bond, and other investment trades by Fed governors and presidents from January 1, 2020 to the present,” along with other related material.

Warren’s inquiry stems from the fact that the President of the Dallas Fed, Robert Kaplan, and the President of the Boston Fed, Eric Rosengren, had to step down in September over scandalous trading activity in 2020. Trading questions have been raised about other Fed officials as well, including Powell.

The Fed has stonewalled the media for months now on making full disclosures of the details of these trades. For example, it appears from our reporting that Goldman Sachs was involved in at least some of Kaplan’s trades and Citigroup was financing at least some of Rosengren’s trades. Both Wall Street mega banks are supervised by the Fed and it is unseemly for Fed officials to be engaging in active trading with banks its variously supervises and bails out. (See New Documents Show the Fed’s Trading Scandal Includes Two of the Wall Street Banks It Supervises: Goldman Sachs and Citigroup.)

Warren’s letter of last Tuesday to Powell also makes clear that the Fed has been stonewalling her since her staff made a written request for information on October 22, “despite numerous follow-ups over the last six weeks.”

Clearly, both the Fed and the Wall Street mega banks believe they have nothing to fear from the Senate Banking Committee being able to muster the votes to use its subpoena power.

Powell’s answer to all of this has been to refer the matter to the Fed’s Inspector General – who reports to the Board of the Fed – rather than making a referral to the Justice Department or the Securities and Exchange Commission (SEC).

On October 4, Warren sent a letter to Gary Gensler, Chair of the SEC, asking that the “SEC investigate trading in securities by high-level Federal Reserve officials and determine if any of these ethically questionable transactions may have violated insider trading rules.” To date, the SEC has failed to indicate if it is investigating the matter, which goes to the heart of the integrity of the central bank of the United States.

Senator Pat Toomey (R-PA) may well be one of the obstacles to the Senate Banking Committee being able to effectively use its subpoena power. Toomey sits as the Ranking Member of the Committee. According to the Center for Responsive Politics, over the course of his political career, Toomey’s largest donor to either his Campaign Committee and/or Leadership PAC has been the Club for Growth, which has provided more than $1.26 million to Toomey’s political campaigns.  In the same time span, Toomey’s second and third largest donors are the hedge fund, Elliott Management, and Goldman Sachs, the mega Wall Street firm where Dallas Fed President Robert Kaplan worked for 22 years.

The Club for Growth is a dark money group that has pushed for the privatization of Social Security; the destruction of workers’ rights and unions; and the deregulation of dangerous industries. Toomey served as the President of Club for Growth from 2005 to 2009.

Another group that has advanced Toomey’s political career is Freedom Partners Action Fund. It funneled at least $4.3 million into running attack ads against Toomey’s Democratic challenger, Katie McGinty, in the 2016 senate race in Pennsylvania.

Charles Koch, the billionaire Chairman and CEO of the fossils fuels conglomerate, Koch Industries, and his trust, gave $14 million to the Freedom Partners Action Fund Super Pac from 2014 through July 2018 according to the Center for Responsive Politics. Freedom Partners played an outsized role in staffing up the Trump administration. (See How Did Koch Industries’ Law Firm Grab Control at the White House?)

Charles Koch has more than just a passing interest in the regulation and oversight of trading on Wall Street. That’s because Koch Industries owns a sprawling trading conglomerate in addition to its fossil fuels interests. (See The Kochtopus Is Betting Billions in the Stock Market: Is There a Case for Systemic Risk?)

Koch Industries also owns i360, an unprecedented invasion by a corporate conglomerate into political campaign activities that rivals the Republican Party’s database and operations. (See The Dangerous and Invisible Hand in the 2020 Election: Charles Koch’s i360.)

Until the American people raise their voices loud enough to achieve meaningful campaign finance reform, Senator Warren – and so many others – are left with few options.

If Elizabeth Warren Is Already Angry at Mary Jo White, Wait Until She Hears About This

Elizabeth Warren Steps Into the F.I.R.E. of Wall Street Corruption