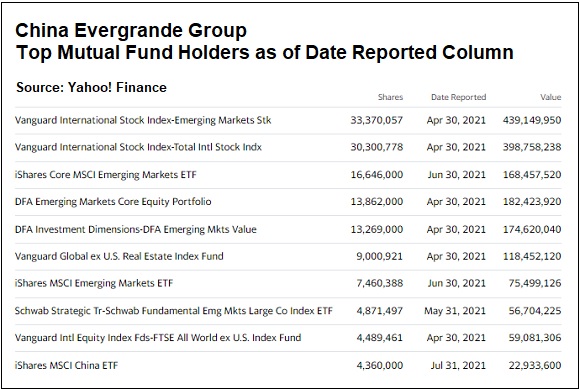 Global bank stocks took a bruising today as questions grow as to just how much exposure large financial institutions have to the teetering China Evergrande Group, a real estate development company in China which owes more than $300 billion in debt that it can’t repay. The Dow Jones Industrial Average shed 614.4 points by the closing bell today, or 1.78 percent, while global mega banks were down anywhere from more than 7 percent for foreign banks to more than 3 percent for U.S. mega banks. (See chart below.)

A big question roiling markets is who has exposure as a counterparty to Credit Default Swaps on China Evergrande Group or other troubled Chinese companies. Where there is lack of transparency on such an issue, investors tend to sell first and ask questions later. Many of the China-related ETFs that trade in the U.S. lost 5 percent or more today. The ADRs of Henderson Land Development Co. lost 12.99 percent today. Henderson is another Chinese property developer.

The publicly-traded shares of the China Evergrande Group have collapsed by 86 percent since October, with hundreds of millions of dollars of its shares hiding out in some big-name mutual funds in the U.S. (See chart above.)

The fallout today was evident in the trading of the CBOE Volatility Index (VIX) as it spiked at one point by more than 30 percent in mid-afternoon trading. (See chart below.) The index is known as the fear gauge on Wall Street.

For more of the recent fallout from investing in Chinese stocks see U.S. Mega Banks Were Sitting on $6.56 Billion of Chinese Education Stocks that China Just Eviscerated and The Communist Party Just Wiped Out a Whole Industry in China; Next Target, Chinese Companies Spilling Secrets in IPOs on the New York Stock Exchange. 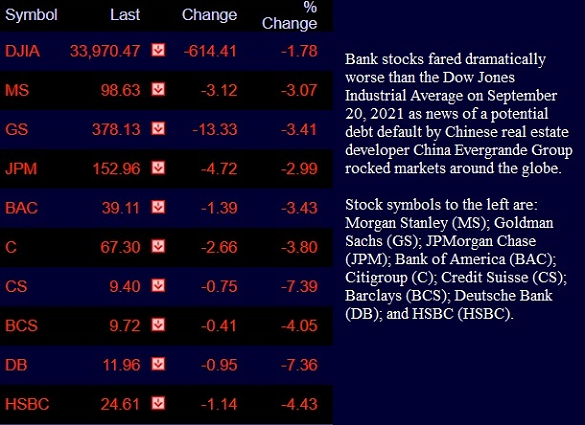 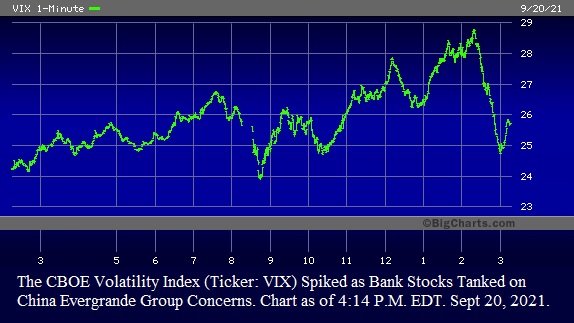