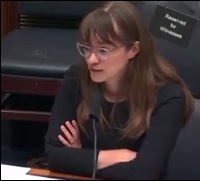 Yesterday, the House Financial Services’ Subcommittee on Oversight and Investigations held a critically important hearing on the crypto craze that has engulfed U.S. financial markets. The hearing was titled: “America on ‘FIRE’: Will the Crypto Frenzy Lead to Financial Independence and Early Retirement or Financial Ruin?”

Before the witnesses could testify, the Republican Ranking Member of the Subcommittee, Congressman Tom Emmer of Minnesota, delivered Alice in Wonderland opening remarks that downplayed the legitimate concerns of the hearing and effectively characterized crypto as the best innovation since sliced bread. (Emmer is a former registered lobbyist in Minnesota and his Congressional campaign coffers are stuffed with money from the financial services industry.)

It didn’t take long, however, for that farcical assessment to collapse under the weight of testimony from a Wall Street veteran, Alexis Goldstein, who is the current Director of Financial Policy for the nonprofit group, the Open Markets Institute.

Goldstein was asked by Congresswoman Maxine Waters about a survey released earlier this year by the accounting firm, PwC, which indicated that 1 in 7 hedge funds have 10 to 20 percent of their total assets under management invested in crypto. (Equally frightening, the same survey found that 86 percent of the hedge funds currently investing in crypto intend to deploy more capital by the end of this year.)

Goldstein responded that the public has already witnessed this year the collapse of the family office hedge fund, Archegos, which demonstrated that when banks have prime broker relationships with hedge funds it can create losses at the banks, which hold federally-insured (taxpayer-backstopped) deposits. (Large global banks lost more than $10.4 billion when Archegos defaulted on its margin loans to the banks in March.) Goldstein explained:

“If hedge funds get farther into crypto, they don’t care about direction. They’ll go long, they’ll go short. They can use leverage. There are lots of cryptocurrency exchanges like FTX and Binance and many others that allow people to use insane amounts of leverage – 100 times to 1…So what happens if a huge number of hedge funds have prime broker relationships with too-big-to-fail banks [and] all happen to be in similar crypto positions, whether it’s long or short and there’s massive volatility in the market. They may have to sell some of their other assets. It may lead to margin calls in their non-crypto assets which could lead to forced liquidations and sort of redound to the banks themselves in the form of counterparty risk.”

Not to put too fine a point on it but counterparty risk is what led to the financial contagion that crashed Wall Street in 2008, leading to the worst economic crisis in the U.S. since the Great Depression of the 1930s. (For a nightmare snapshot of what insane leverage and interconnectivity looked like at that time, here’s a chart of Goldman Sachs’ derivative exposure to other banks as of June 2008.)

Waters then asked Goldstein if there was any transparency on which specific hedge funds held the largest positions in crypto and who their counterparties are. Goldstein responded that crypto is not currently reported on the 13F forms that hedge funds are required to file with the SEC so regulators are currently “totally in the dark.”

Hmmm. Darkness and 100 to 1 leverage. What could possibly go wrong?

Goldstein rounded out this potential doomsday scenario in her written testimony to the Subcommittee. Goldstein explained how the mega banks on Wall Street, which provide margin lending and securities lending to hedge funds under a program they quaintly call “prime broker” services, are themselves taking a “growing presence in the cryptocurrency market.” Goldstein wrote:

“…Too Big To Fail banks are also a growing presence in the cryptocurrency market. Goldman Sachs plans to open a cryptocurrency trading desk, BNY Mellon allows its clients to hold Bitcoin as of February 19, Wells Fargo will offer professionally managed cryptocurrency funds for qualified investors. Morgan Stanley’s Europe Opportunity Fund reported owning 28,298 shares of the Grayscale Bitcoin Trust, according to a June 28 filing. Venture Capital firms have already invested $17 billion into cryptocurrency firms so far in 2021, more than three times what they invested in all of 2020. In addition, the concentration of particular cryptocurrency assets into a small handful of addresses raise concerns about power concentrations. To take one example, there are several very large ‘whales’ in the Dogecoin cryptocurrency, including a single address that holds over 36.7 billion DOGE (or some 28% of total Dogecoin) worth more than $8 billion. As of February, the top 20 largest Dogecoin addresses held half of the cryptocurrency’s entire supply.”

The Subcommittee’s Memorandum released as background for the hearing raised another alarming aspect of the crypto craze – much of what you think you see may not be real. The Memorandum explained:

“Some cryptocurrency exchanges have reportedly been exaggerating their volumes to attract more participation. A 2019 study by Bitwise Asset Management suggested that 95% of Bitcoin’s trading volume displayed on digital asset price and volume aggregator CoinMarketCap.com is either fake or non-economic in nature.

“A 2020 study published in the Journal of Finance argued that a single market manipulator likely fueled half of Bitcoin’s 2017 price surge that pushed its price close to $20,000. For this alleged manipulation, Bitfinex and Tether faced a class action complaint seeking a total of $1.4 trillion in damages and are under investigation by federal and state regulators.”

In a terse statement at the beginning of the hearing, Congressman Brad Sherman, Democrat from California, said “Cryptocurrencies have the political support of the patriotic anarchists who are rooting for tax evasion. I hope we shut it down.”

The Smartest Guys in the Room Call Bitcoin “Rat Poison Squared,” “a Colossal Pump-and-Dump Scheme” and “a Big Criminal Scam” but Federal Regulators Look the Other Way