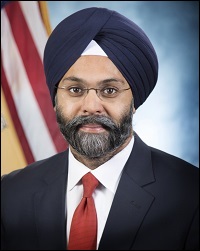 SEC Chair Gary Gensler has selected the sitting Attorney General of New Jersey, Gurbir Grewal, age 48, to be his Director of Enforcement. The selection has pleased progressive public interest groups who have been advocating for years against allowing former Wall Street defense attorneys to take the top leadership positions at the SEC. The nonpartisan watchdog group, Better Markets, Tweeted a quote from its President and CEO, Dennis Kelleher, saying that Grewal “appears to be the opposite of a Wall Street defense lawyer, which is a welcome break with the past and exactly what the SEC division of enforcement needs.”

Gensler came under withering criticism from progressives when he appointed a law partner from Paul Weiss for the job in April, Alex Young K. Oh. She abruptly resigned after just six days on the job when it became clear she was going to be sanctioned by a judge over her conduct in an Exxon case. (Our critique of Paul Weiss as the law firm Wall Street banks had flocked to for decades in hopes of dodging their serial fraud charges perhaps didn’t help her standing either.)

Grewal won’t take his post at the SEC until July 26, apparently needing some time to wind up matters in the New Jersey Attorney General’s office.

Grewal has served as the New Jersey Attorney General since January 16, 2018. Before that he had been the Bergen County Prosecutor from January 2016 to January 2018. Prior to that he held various positions in the U.S. Attorney’s Office for the District of New Jersey from November 2010 to January 2016. His last position there was Chief of the Economic Crimes Unit.

Prior to his years in public service, Grewal worked for the large law firm Howrey LLP, which dissolved in 2011. His work included representing publicly-traded companies in proceedings with financial regulators.

Grewal is a graduate of Georgetown University and received his law degree from the College of William & Mary. He is the father of three. His wife, Amrit, is a neurologist.