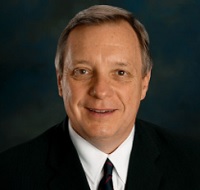 Senator Dick Durbin (D-IL), Chair of the Senate Judiciary Committee that Held the Confirmation Hearing for Kenneth Polite to Head the Criminal Division of the Justice Department

What happened on July 20 with the 56-44 vote in the Senate to confirm Kenneth Polite (pronounced Po-leet) to head the most powerful criminal law enforcement office in the United States, the Criminal Division of the Department of Justice, is a cautionary tale that should concern every American. Despite Polite owing more than $1.5 million in debts according to his financial disclosure form and public mortgage records; paying over 18 percent interest on an outstanding balance on a credit card; 19.99 percent interest on a personal loan; and now accepting a job where his income will be slashed by about 77 percent – not one Senator on the Senate Judiciary Committee asked a single question about this man’s bizarre financial picture during his confirmation hearing on May 26 or in written questions that followed.

Senator Dick Durbin, a Democrat from Illinois, Chairs the Senate Judiciary Committee. Durbin took to the Senate floor on July 20, the day of the full Senate vote on Polite, to give a glowing endorsement of Polite.

Polite hails from the law firm of Morgan, Lewis & Bochius, which has plenty of red flags itself. Polite was a partner there earning approximately $877,500 in 2020. His job at the Justice Department will pay less than $200,000 annually. Morgan, Lewis has, for decades, provided legal representation to the Wall Street mega banks. Polite’s financial disclosure form reveals that JPMorgan Chase was one of his clients over the past year.

Polite also revealed on his financial disclosure form that Morgan Stanley was his client over the past year. Morgan Stanley, along with other Wall Street banks represented by Morgan Lewis, are under a new Justice Department investigation for loaning out their balance sheets to hedge funds to conduct trading in highly-leveraged and highly-concentrated stock positions, which led to the collapse of the Archegos family office hedge fund in March of this year; a 50 percent plunge in the price of some of the stocks involved in the scheme; and more than $10 billion in losses for the banks involved in providing the margin loans, which were dressed up as derivative trades.

Under Polite’s Ethics Agreement, “he will be required to recuse from particular matters involving specific parties involving his former employer or former clients for a period of two years after he is appointed….” Why should the American people accept a Biden nominee that can’t hit the ground running against one of the most criminally-inclined industries in America. Why should the U.S. Senate confirm such a man?

Instead of doing the kind of due diligence on this man that a position of this magnitude deserves at his confirmation hearing, Polite was crammed in on a panel with four other nominees up for confirmation that were all to be questioned by Senators at the same time. Each Senator had only five minutes to question all five nominees and those five minutes included the time that the nominees had to answer the questions.

Senator John Cornyn (R-TX) said that the structure of this hearing “trivializes our constitutional duty to advise and consent” and that packing this many nominees into one hearing was “beyond ridiculous” and was, effectively, a “drive-by hearing.”

The questioning of Polite was further undermined by some invisible hand deciding to include David Chipman, the nominee to be Director of the Bureau of Alcohol, Tobacco, Firearms and Explosives (ATF), among the five nominees to be confirmed. Chipman had been a 25-year veteran of the ATF but is currently a senior policy adviser at Giffords, an organization advocating for reining in gun violence through stricter gun laws. Naturally, that set the hair on fire of right-wing Republicans on the Senate Judiciary Committee, who spent the bulk of their five minutes pummeling Chipman with gun questions. Polite received only a few softball questions from Senators.

Also greasing the gears for a swift confirmation of Polite was a glowing introduction of him during the Senate Judiciary confirmation hearing by – wait for it – a Republican Senator with an A+ rating from the NRA’s Political Victory Fund – Senator Bill Cassidy of Louisiana.

Cassidy’s largest campaign donor from 2015-2020 is Ochsner Health System, which has provided $117,840 in donations from employees, executives and family members. Polite had served on the Board of Directors of Ochsner Health System since September 2017 up to his confirmation.  It’s a large nonprofit hospital owner in Louisiana.

Following Polite’s confirmation hearing, members of the Senate Judiciary Committee had the opportunity to submit written questions for Polite to answer in writing. Only 6 Senators, all Republican, submitted any questions to Polite. The questions were heavily focused on Polite’s views on the rights of gun owners. Polite wrote that he owns a Glock 43 and that he had engaged in “recreational hunting.” Apparently, those answers rendered him good to go in the eyes of enough Republicans to be confirmed by the full Senate.

These are the hard questions that Senators who are genuinely serving the interests of the American people on the Senate Judiciary Committee should have asked Polite:

1.With more than $1.5 million in debt, how can you afford to give up your law partner position at Morgan, Lewis & Bockius (which paid you $1.17 million for the past 16 months) and accept a government position paying you less than $200,000 each year?

2. Why is American Express charging you 18.24 percent interest on a credit card balance of $15,000 to $50,000 while Citibank (part of the serially-charged mega Wall Street bank, Citigroup) is only charging you approximately 2.09 percent interest (1-month Libor plus 2 percent) on a credit line of $250,000 to $500,000? (Credit lines are typically given to corporations, not deeply-indebted individuals.)

4. According to public property records and your financial disclosure form, you own a condo as a rental income unit on West 148th Street in West Harlem. Zillow puts the expected rental income from that unit at approximately $2,462 per month. But public mortgage records show you have been locked in to a payment of $4,566 a month on the mortgage on that property. Why haven’t you sold this property? How will you be able to carry this property when you take a pay cut of about 77 percent at the Justice Department?

5. On or about June 26, 2018, you purchased a personal residence in Philadelphia for the sum of $549,750 upon which you obtained a mortgage for $522,262, meaning that you provided a down payment of just 5 percent. This mortgage was obtained from the same bank through which you obtained a $730,000 mortgage on your rental condo. How were you able to obtain a mortgage on just a 5 percent down payment on your home given your other outstanding debts?

7. Your financial disclosure form and your wife’s personal bio shows that your wife, a practicing doctor, is also collecting income from various law firms for serving as an expert witness. The conflict of interest statute covering Executive Branch officials is 18 U.S.C. § 208. The Office of Government Ethics has interpreted Section 208 to require “disqualification for financial interests held by the official individually as well as by persons or entities who are close enough to the official that their interests may be ‘imputed’ to the official. Imputed interests include those held by spouses, minor children, general partners, organizations in which the official serves or is employed, and organizations with whom the official has or is arranging future employment.” Please report the names of the companies involved in the court cases in which your wife served as an expert witness and the respective sums she received over the past year.

8. Your previous law firm, Morgan Lewis, immediately issued a press release bragging about your confirmation to head the Criminal Division of the Justice Department. In that press release, Morgan Lewis also bragged about their roster of lawyers that had also traveled through the revolving door, writing: “For example, Matthew Miner, who prior to rejoining the firm in January 2020 served as the DOJ’s Deputy Assistant Attorney General; Sandra Moser previously served as former chief of the DOJ’s Fraud Section; Zane Memeger previously served as the United States Attorney for the Eastern District of Pennsylvania; and more than a dozen have served as AUSAs [Assistant U.S. Attorneys].” Given your current debt levels and the fact that you would greatly increase your income were you to rejoin Morgan Lewis following your position at the Justice Department, do you have any formal, or informal, arrangement to return to that law firm, or any other corporate law firm, after leaving the Justice Department?

9. If you answered yes to question 8, how can we trust that you won’t spend your time at the Justice Department attempting to avoid stepping on the toes of your future law partners and their corporate clients?

Eric Holder, After Failing to Prosecute Wall Street, May Run for President