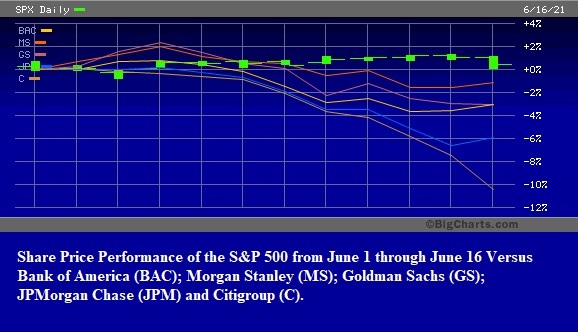 On May 26 Bloomberg News reported that the U.S. Department of Justice had opened an investigation into Archegos Capital Management and its bank lenders. Archegos is the family office hedge fund that had blown up in late March, causing a total of more than $10 billion in losses to mega banks including Credit Suisse, UBS, Morgan Stanley and others.

Archegos had obtained leverage of as much as 85 percent on its heavily-concentrated stock trades from some of its banks, in brazen violation of the Federal Reserve’s Regulation T which sets margin for stock trading at a maximum of 50 percent on opening trades. In addition, the banks were holding the stocks in their own names (while shifting losses and gains to Archegos under a derivatives contract called a swap) thus denying the public the knowledge of the true owners of these stock positions under 13F public filings with the SEC.

This kind of tricked-up derivative contract accomplished two other things as well: it allowed the banks to avoid the Volcker Rule that bans them from owning a hedge fund while still letting them loan out their balance sheet to a hedge fund and collect lucrative fees along the way. It also allowed the banks to ignore their own internal broker-dealer rules on making margin loans against concentrated stock positions. There is also the riveting question as to just who was paying the capital gains taxes on these stock trades. (See Did Archegos, Like Renaissance Hedge Fund, Avoid Billions in U.S. Tax Payments through a Scheme with the Banks?)

In late March, when Archegos couldn’t meet its margin calls with the banks, the banks had to panic sell the stocks they were holding, pushing down the prices of the stocks in some cases by as much as 50 percent.

According to reporting in the New York Times, Archegos owned “$20 billion in shares of ViacomCBS,” which made this obscure hedge fund the single largest institutional shareholder of the company, which is a component of the S&P 500 Index. But this information was unknown to public investors because the banks were reporting ownership of these shares on their own 13F filings with the SEC.

The U.S. Department of Justice can bring criminal prosecutions while the Securities and Exchange Commission can bring only civil cases. Thus, when the Justice Department gets involved, traders pay attention on Wall Street. That’s been particularly true since September 16, 2019 when the Justice Department criminally charged two current and one former trader at JPMorgan Chase with turning the precious metals desk of the bank into a racketeering enterprise. The RICO statute, which was used in charging the traders for the first time that anyone can remember, can land a person in prison for as long as 20 years. RICO has been typically used to charge organized crime figures.

It strikes us as perhaps more than a coincidence that less than three weeks after the news broke that the Justice Department was investigating the structure of trading between Archegos and the banks that three of the biggest banks on Wall Street have announced that trading revenues are going to be down substantially in the second quarter.

The most dire prediction thus far comes from Jamie Dimon, Chairman and CEO of JPMorgan Chase, the bank whose traders have been charged under the RICO statute. Dimon indicated at a virtual Morgan Stanley conference on Monday that he expects trading revenues to plunge by approximately 38 percent year-over-year.

Speaking at the same conference, Citigroup’s CFO, Mark Mason, indicated that it’s likely that the bank could see a decline of around 30 percent in trading revenues versus the second quarter of 2020.

Morgan Stanley, which has acknowledged its role in lending to Archegos and said earlier that it would take a $911 million loss from the debacle, also indicated at the conference through its CEO James Gorman that it will experience a slowdown in trading revenues, particularly in fixed income (bond trading).

The trading slowdown and/or Justice Department investigation is already showing in the banks’ stock prices. Citigroup has taken the worst hit this month, falling by an eyebrow-raising 3.2 percent just yesterday versus a decline in the S&P 500 Index of just 0.54 percent.

Citigroup opened for trading on June 1 at a share price of $79.49. It closed yesterday at $71.46 for a decline thus far in June of 10.10 percent. That’s not a good trend for a bank whose share price is still 76 percent lower than it was at the end of 2007. Citigroup received the largest bailout in U.S. history during and after the 2008 Wall Street crash. Its stock traded at 99 cents in early 2009. To dress up its share price, Citigroup did a 1-for-10 reverse stock split on May 9, 2011, leaving shareholders with 1 share for each 10 shares previously held while window-dressing its trading price in the market.

Curiously, despite Dimon’s perpetual talk of his bank’s “fortress balance sheet,” JPMorgan Chase is the second worst performing bank stock so far this month among the Big Five. (See chart above.)