This Tiny Country Has $245 Billion Invested in U.S. Stocks 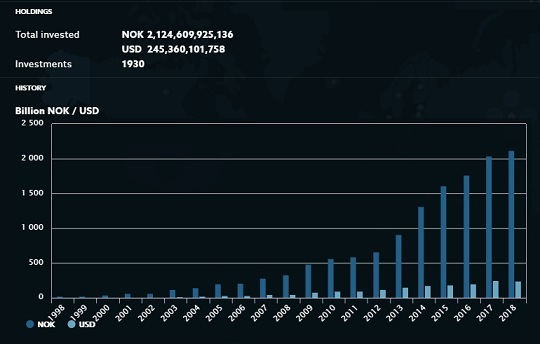 But according to data provided at the website of Norway’s central bank, Norges Bank, every man, woman and child in Norway has the equivalent of a $45,000 stake in U.S. stocks. The central bank manages the Government Pension Fund Global (also known as the Norwegian Oil Fund) which owned a whopping $245 billion of the U.S. equity market as of December 31, 2018.

That $245 billion includes big chunks of change in U.S. social media/tech stocks and the mega banks on Wall Street. Here’s a sampling: $7.5 billion in Microsoft;  $7.2 billion in Apple; $6.7 billion in Alphabet, parent of Google; $6.3 billion in Amazon; and $3.1 billion in Facebook. Investments in the Wall Street banks that helped to blow up the global financial system in 2008 include the following: $2.9 billion in JPMorgan Chase; $2.6 billion in Bank of America; $2 billion in Wells Fargo; $1.3 billion in Citigroup; $659 million in Morgan Stanley; and $455 million in Goldman Sachs.

Norway, of course, is not the only foreign central bank meddling in the U.S. stock market. Another big central bank player is Switzerland’s central bank, the Swiss National Bank. Its SEC filing for the period ending December 31, 2018 showed it owned 2,536 stocks traded in the U.S. at a market value of $78 billion. Its largest holdings were in the same five social/media tech names as Norway’s central bank, i.e., Microsoft, Apple, Alphabet, Amazon, and Facebook.

The central banks of Israel and Japan are also big players in the stock market, but exactly how much they have committed to U.S. stocks is unknown.

Many folks who have studied the prudence of central banks meddling in stock markets have found it to be a dangerous idea. Since central banks have the ability to electronically create money out of thin air, it stands to reason that their involvement would destroy the core reason for having a stock market – to create a fair and efficient mechanism to price shares of corporate stock.