Five-count felon JPMorgan Chase is shocked – shocked! – that corporate financing of “the people’s House” has led to corruption and instability in Washington. The Board of Directors of JPMorgan Chase obviously did not see money as a corrupting influence because it has boosted the pay of its Chairman and CEO, Jamie Dimon, to $31.5 million annually despite the fact that Dimon sat at the helm of this bank through its unprecedented five felony counts in a span of six years. The bank admitted to all five counts and got deferred prosecution agreements every single time from the U.S. Department of Justice. Not one of the myriad federal regulators of this bank demanded that Dimon step down as unfit to oversee a bank holding $2 trillion in depositors’ life savings as this six-year crime spree went unchecked.

“Of the six biggest U.S. banks, only Morgan Stanley made it clear that it will not make donations to members of Congress who opposed the Electoral College certification of Biden. The firm will continue contributions to other lawmakers, according to a person with knowledge of the situation who spoke on condition of anonymity.”

Popular Information reported that it had obtained an internal memo from Citigroup that indicated Citigroup’s PAC would “not support candidates who do not respect the rule of law.”

We asked Tom Mueller, author of the brilliant Crisis of Conscience: Whistleblowing in an Age of Fraud for his perspective on this gesture from a serial plunderer on Wall Street. His response: “I’m tickled pink to learn that Citi now officially endorses the rule of law, after decades of stomping all over it. When will they start applying it to their banking?”

Mueller echoed our own thoughts. (See A Private Citizen Would Be in Prison If He Had Citigroup’s Rap Sheet.)

Here is likely what has motivated these mercurial Masters of the Universe on Wall Street to throw a few moldy crumbs to the public’s growing outrage over the dysfunction and corruption in Washington:

On January 8 Twitter determined that the President of the United States, Donald Trump, who has access to the nuclear codes, is not fit to string together 280 characters without inciting violence. Twitter permanently banned Trump from its platform. On the same day, Reuters/Ipsos released a poll finding that “Fifty-seven percent of Americans want Republican President Donald Trump to be immediately removed from office after he encouraged a protest this week that escalated into a deadly riot inside the U.S. Capitol.”

Despite this, few Republicans who have received campaign windfalls from Wall Street were speaking out against the President. (See Jamie Dimon and JPMorgan’s PAC Are Financially Supporting Mitch McConnell’s Reelection Bid.)

In addition, many of the banks’ largest corporate customers are taking a public stand and announcing that they are suspending contributions to members of the House and Senate who voted against the certification of Electoral College votes.

Then there is the fact that two of the Republican Senators who played a decisive role in fomenting the distrust of the presidential election results and challenging the certification of the Electoral College votes – Senator Josh Hawley of Missouri and Ted Cruz of Texas – have received large sums from corporate PACs. According to the Center for Responsive Politics, Hawley has received $711,038 from business PACs since 2017 while Cruz has received $2.4 million since 2011. 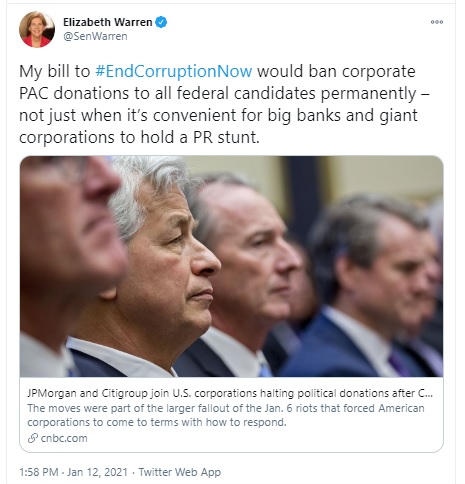