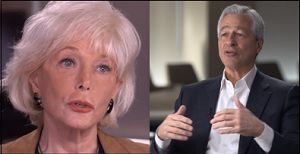 Lesley Stahl of the CBS Investigative News Program, 60 Minutes, Interviews Jamie Dimon on Sunday, November 10, 2019. Stahl Fails to Ask About the Criminal Charges Against the Bank.

Yesterday, Transparency International released its annual Corruption Perceptions Index (CPI). The CPI ranks 180 countries and territories by their perceived levels of government corruption, using 13 expert assessments and surveys of business executives. The most corrupt countries rank lower on the scale while a score of 100 represents the least corrupt. This year the United States ranked below Uruguay on the corruption gauge. The report found this about the U.S.:

“With a score of 69, the United States drops two points since last year to earn its lowest score on the CPI in eight years. This comes at a time when Americans’ trust in government is at an historic low of 17 percent according to the Pew Research Center.”

The least corrupt nations are Denmark, New Zealand and Finland. Patricia Moreira, Managing Director of Transparency International, said this about the report’s findings:

“The lack of real progress against corruption in most countries is disappointing and has profound negative effects on citizens around the world. To have any chance of ending corruption and improving peoples’ lives, we must tackle the relationship between politics and big money. All citizens must be represented in decision making.”

As if on cue, two other news items made headlines yesterday involving two century-old banks in the U.S. and reflects just how unevenly the U.S. government metes out “justice” based on political power.

The former Chairman and CEO of Wells Fargo Bank, John Stumpf, was fined $17.5 million and barred from the banking industry by the federal regulator of national banks, the Office of the Comptroller of the Currency (OCC). The enforcement action resulted from sales quotas established within Wells Fargo bank branches in previous years that incentivized employees to open fake customer accounts. Wells Fargo has not been criminally charged in the matter.

The other news item making headlines yesterday was that the Chairman and CEO of JPMorgan Chase, Jamie Dimon, has received a pay raise to $31.5 million based on his “performance” for the year 2019. The massive compensation comes at a time when the federally-insured bank is under its fourth criminal probe by the U.S. Department of Justice, all of them occurring while Dimon sat at the helm of the bank and all occurring within the past seven years.

In 2013, JPMorgan Chase agreed to pay $920 million to various regulators for its so-called London Whale scandal. Under Dimon’s watch, the bank had used deposits from its federally-insured bank to make wild gambles in derivatives in London, losing $6.2 billion of depositors’ money along the way. No charges were brought against Dimon; he was not barred from the banking industry; and his highly-compensated Board of Directors kept him at the helm.

In 2014 JPMorgan Chase admitted to two criminal felony counts for its role in the Bernie Madoff Ponzi scheme. Bank employees watched Madoff launder billions of dollars through his business account at the bank while ignoring their obligation to report the transactions to FinCEN, the federal financial watchdog that oversees money laundering. In 2015 JPMorgan Chase admitted to another criminal felony count for its role in rigging foreign exchange markets. That’s three criminal felony counts in less than two years versus none in the bank’s prior century of existence and all occurring under the tenure of Jamie Dimon.

During 2019, the year in which Dimon was so lavishly rewarded by his Board for “performance,” JPMorgan Chase had the distinction of being the first bank in U.S. banking history to have one of its trading desks charged with being a criminal enterprise under the Racketeer Influenced and Corrupt Organizations Act (RICO). In September of 2019, the Justice Department charged that the bank was running a criminal enterprise out of its precious metals desk over a period of eight years and charged three of its traders, including the head of the desk, under the RICO statute – which is typically reserved for organized crime figures. The prosecutors wrote:

“As it relates to the RICO conspiracy, the defendants and their co-conspirators were allegedly members of an enterprise—namely, the precious metals desk at Bank A—and conducted the affairs of the desk through a pattern of racketeering activity, specifically, wire fraud affecting a financial institution and bank fraud.”

The Justice Department used the real names of the individuals that were charged but JPMorgan Chase is referred to throughout the indictment only as Bank A. Why should a bank that has already admitted to three criminal felony counts and is now said by the Justice Department to be running a new criminal enterprise receive such preferential treatment by federal law enforcement? It might have something to do with the fact that JPMorgan Chase’s PAC has showered $7 million on federal political campaigns and committees over the past decade, not to mention the tens of millions more its highly-paid employees and outside law firms have lavished on candidates and committees. The bank has also spent tens of millions more lobbying the federal government.

JPMorgan Chase has one other distinction: it is the only major Wall Street bank to be compared to the Gambino crime family in a book by two trial lawyers. In 2016 Helen Davis Chaitman and Lance Gotthoffer released their book, JPMadoff: The Unholy Alliance between America’s Biggest Bank and America’s Biggest Crook. They have titled Chapter Five of the book as: “The Case for Prosecuting Officers of JPMorgan Chase Under RICO.” The gutsy trial lawyers write:

“This country cannot move forward with integrity until it faces the fact that bankers have criminalized the financial services industry. We, the people, have to demand an honest government that enforces the law, even against super rich criminals. As Robert Kennedy said, ‘Every society gets the kind of criminal it deserves. What is equally true is that every community gets the kind of law enforcement it insists on…If Jamie Dimon is running a criminal institution, he should be prosecuted for it. And law enforcement has the perfect tool for such a prosecution: the Racketeer Influenced and Corrupt Organizations Act (‘RICO’).”

Unfortunately, the U.S. Department of Justice keeps charging low-level individuals at JPMorgan Chase but leaving the top dog, Jamie Dimon, at the helm.

In addition to the criminal felony charges, Chaitman and Gotthoffer provide this list of charges to which JPMorgan Chase has paid fines during the tenure of Dimon as Chairman and CEO:

“In December 2013, JPMC paid $22.1 million to settle claims that the bank imposed expensive and unnecessary flood insurance on homeowners whose mortgages the bank serviced.”

After Chaitman and Gotthoffer’s book went to print, the crime spree at JPMorgan Chase continued. In 2016 the bank agreed to charges by the SEC that it had steered its customers into in-house products where it reaped higher profits without disclosing this conflict to the customer. It paid $267 million to settle these charges.

In 2018, JPMorgan was repeatedly charged. In October 2018 it agreed to pay $5.3 million to settle U.S. Treasury allegations that “it violated Cuban Assets Control Regulations, Iranian sanctions and Weapons of Mass Destruction sanctions 87 times,” according to Reuters.

In December 2018 it settled claims with the SEC for $135 million over charges that it had improperly handled thousands of transactions involving the shares of foreign companies.

And as detailed above, in 2019 it made history with criminal RICO charges against how it was conducting its precious metals trading desk.

Yesterday, as if they were looking directly at what is happening in the United States, among the recommendations made by Transparency International to tackle growing government corruption were the following three key objectives:

If none of these objectives are tackled by the U.S. Congress, expect the U.S. to fall further toward third world corruption status.