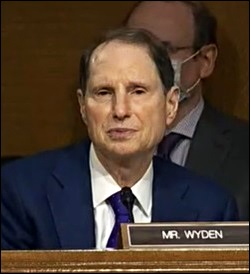 The mood among Democrats in Washington was captured at the Senate Finance Committee’s confirmation hearing on Tuesday for former Fed Chair Janet Yellen to become the new Treasury Secretary. Senator Ron Wyden, Democrat of Oregon and the Ranking Member of the Committee (who is expected to become the new Chair), said this in his opening remarks:

“This is the second time in 12 years that a Republican President leaves office with the economy in ruins. Today there’s also a surging pandemic and armed troops guarding our Capitol from far-right insurrectionist attack. The Biden administration isn’t going to begin with inaugural balls; it’s going to begin with all-out triage.”

Wyden also made clear that he doesn’t intend to be bullied into the same failed strategy that governed the response to the Wall Street implosion of 2008. Wyden stated:

“My top economic priority going forward is avoiding the mistake Congress made in the last recession – which was taking a foot off the gas pedal before recovery took hold. Congress didn’t do enough in 2009 to help the unemployed and struggling homeowners. If stepping off the gas wasn’t bad enough, two years later House Republicans passed policies that yanked out the spark plugs and let the air out of the tires, as well. In Oregon, it took seven and a half years for unemployment to return to its pre-recession level. That cannot happen again, or else millions and millions of people will go through years of needless hardship. Some will never recover the lives that they had prior to the pandemic.” 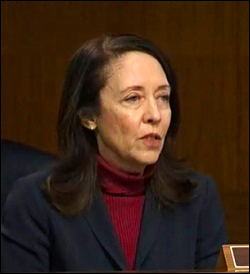 Senator Maria Cantwell, Democrat of Washington, quizzed Yellen on what she planned to do to prevent another bailout by taxpayers, should the mega banks on Wall Street blow themselves up again. Cantwell said this:

“I want to make sure that you are going to protect federal taxpayers and their investments as far as the private banking that exists in America and that you will protect – continue to enforce – the important laws that are on the books and use the Federal Stability Oversight Committee [actual name is Financial Stability Oversight Council] to make sure we’re protecting depositors from having the federal government again ever having to bail out Wall Street….”

Yellen responded with this:

“Senator Cantwell, I couldn’t agree with you more. Our focus should be on Main Street, not Wall Street. We should demand, as Dodd-Frank insisted, that the largest institutions, particularly those that pose systemic risks, have adequate capital and liquidity and plans by which if they were to fail they could be resolved without posing burdens on taxpayers.

“During my time at the Fed, I worked very hard to strengthen the banking system, to make sure that these institutions don’t operate in ways that would harm Main Street. I am pleased to see that when the pandemic hit and there was a good deal of financial disruption, that especially the largest banks have been able to – due to the reforms that were put in place – continue to lend, to survive with adequate capital, and to support the needs of households and businesses. And, you have my absolute pledge that this will continue to be my focus.”

Yellen’s narrative of how well these banks have held up would be a lot more convincing had the Fed not been forced to flood Wall Street with more than $9 trillion in cumulative emergency loans, the bulk of that unleashed months before the pandemic had arrived in the United States. (See The Fed Has Pumped $9 Trillion into Wall Street Over the Past Six Months, But Mnuchin Says “This Isn’t Like the Financial Crisis”.)

Yellen also said nothing in her testimony about walking out the door of the Fed on February 3, 2018 and immediately cashing in on her knowledge of the Fed’s thinking by accepting millions of dollars in speaking fees over the next three years from the very same mega banks on Wall Street she had been mandated to regulate at the Fed. By failing to report the extent of her speaking fees for 2018, and providing just the fees she harvested in 2019 and 2020, Yellen violated Biden’s promise for transparency. (See our reports here and here.)

Anticipating that there is going to be pushback from Republicans on President Biden’s COVID-19 relief plan, Senator Sherrod Brown, a Democrat from Ohio,  asked Yellen what would happen if the U.S. government fails to make substantial investments in state and local governments as the pandemic continues to hollow out their budgets. Yellen responded as follows:

“We’re already seeing substantial layoffs of teachers and with budget shortfalls we’re going to see further layoffs of essential workers, including policemen and firefighters and sanitation workers. Not only is this going to be a further hardship for these essential workers and the communities that they serve, but it’s also going to have ripple effects through the economy as people contract their spending and create further job losses throughout the economy. And, so, I think it’s very important that we provide this aid.”

Perhaps Yellen would like to donate all of her millions of dollars in speaking fees from the Wall Street mega banks to a fund for unemployed front-line workers.