Gallup Polling: For the Past 18 Years, U.S. Adults Have Preferred Real Estate as an Investment Over Stocks 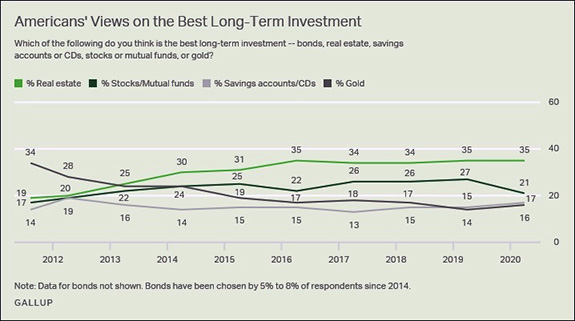 Happy New Year’s Eve 2020 and welcome to a correctly skeptical America when it comes to Wall Street.

Despite the President of the United States using his bully pulpit for the past four years to tell Americans how great the stock market is (see here, here and here, for example) Gallup polling shows that U.S. adults have consistently favored real estate as the better long-term investment over stocks. (See chart above.)

In fact, in the April 1-14 poll that Gallup conducted this year, stocks reached their lowest score versus real estate since 2012. In the spring poll, which followed the sharp stock market selloff in March, 35 percent of adults rated real estate the better long-term investment versus 21 percent who voted for stocks.

The perception that Wall Street is a rigged arena for the benefit of the one percent has gained steam since the dot.com bust of 2000 and the Wall Street implosion from subprime debt and derivatives followed by an unprecedented bailout in 2008. Another way to interpret this is that the continued deregulation of Wall Street that began in 1999 during President Bill Clinton’s administration and has picked up momentum ever since, has killed the public’s confidence to entrust life savings to Wall Street.

Demonstrating how Americans are perpetually seduced into market tops by carnival barkers on Wall Street, the January 7-10 Gallup poll in 2000 found that 67 percent of Americans thought it would be a good idea to invest $1,000 in the stock market. Just two months later, the Nasdaq stock market entered a death spiral, dragging it down 78 percent from peak to trough in 2003. That was the dot.com bust where Wall Street research “analysts” put out buy ratings to the public on stocks they were calling “dogs” and “crap” in internal emails.

The poster boy for that era was Jack Grubman, an analyst at Salomon Smith Barney, which was at the time a unit of the serially charged Citigroup. (Smith Barney’s retail brokerage firm has since merged with Morgan Stanley.) Grubman was charged in a civil suit by the SEC in 2003 for issuing fraudulent research to the investing public. Grubman’s case never went to trial nor was he criminally charged by the Justice Department. Grubman got off with a $15 million fine, was barred from the industry, and walked away rich. According to the SEC, Grubman’s compensation at Salomon Smith Barney for issuing fraudulent research “exceeded $67.5 million, including his multi-million dollar severance package.” Think about that carefully: you are barred from your industry for corruption in a high profile case and you still receive a multi-million-dollar severance package.

For a sampling of the current crime wave engulfing Wall Street, see related articles below.

Goldman Sachs Criminally Charged by Justice Department – and Its Stock Closes Up $2.49