These Are the Very Real Dangers to the U.S. Economy of Not Issuing $2,000 Stimulus Checks 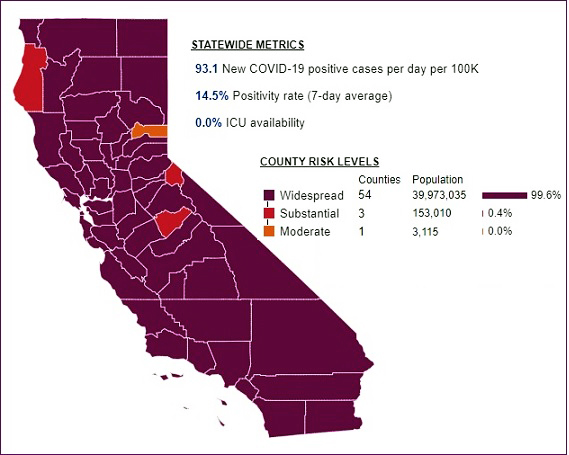 We start from the factual premise that the current financial crisis did not originate as a result of the pandemic. The plumbing of the financial system broke on September 17, 2019, months before the first COVID-19 case was discovered anywhere in the world. We know this because this is the date that the Federal Reserve announced it would begin acting as lender of last resort to the repo loan market on Wall Street. (Repos are a form of borrowing where banks, brokerage firms, hedge funds and mutual funds engage in short term loans, typically overnight, which are collateralized with safe securities such as Treasury notes.)

The demand for short-term repo borrowing dramatically outpaced amounts offered for loans on September 17. This drove the overnight repo loan rate to an unprecedented high of 10 percent rather than the typical range of 2 to 2.25 percent, which was where the Fed was targeting the Fed Funds rate at that time. The Fed was forced to race to the rescue, injecting $53 billion into the repo market via the New York Fed on that date and promising to make another $75 billion available the next morning.

The repo loans from the Fed continued in massive amounts through the fall. By January 6 we were reporting, using the Fed’s own data, that the “Federal Reserve Admits It Pumped More than $6 Trillion to Wall Street in Recent Six Week Period.” The CDC reports that it “received notification of the first case of laboratory-confirmed COVID-19 in the United States on January 22, 2020.”

Until the American people understand why the Fed was bailing out Wall Street to the tune of $6 trillion in cumulative loans before the first case of COVID-19 was identified in the U.S., we are simply spectators of the barbarians at the gate rather than citizens in a representative democracy.

The Fed cleverly made all of these repo loans via its open market operations rather than categorizing them as Section 13(3) of the Federal Reserve Act’s emergency loan programs. This means that the public may never get to learn what firms were being bailed out.

By March 17, 2020, with the pandemic rattling markets, the Fed created the same Wall Street bailout facility it had used during the 2008 financial crisis, the Primary Dealer Credit Facility (PDCF) under its 13(3) powers. That facility effectively took over the job of making the repo loans. Following the creation of that bailout facility, the Fed proceeded to add more and more bailout facilities and has provided the names of borrowers and amounts borrowed for most of them. It has failed to provide the names of borrowers under the PDCF for the past nine months, despite Fed Chairman Jerome Powell testifying to Congress that the Fed would provide full transparency to the American people on its bailout programs.

During the 2007 to 2010 financial crisis, the Fed used the PDCF to secretly provide $8.95 trillion in cumulative loans over a 2-1/2 year period to the trading houses on Wall Street. Just three trading firms received two-thirds of that money: Citigroup, Merrill Lynch and Morgan Stanley. All three firms were eligible, under the new PDCF, to borrow from that facility, along with 20 other primary dealers.

The Fed was created in 1913 to be a lender of last resort to the banking system. It was unthinkable over the next 95 years that the Fed would ever engage in bailing out speculators on Wall Street. But that’s exactly what the Fed did from December 2007 through at least the middle of 2010. And that may well be what the Fed did under the PDCF and other bailout programs this time around. But until Congress demands a full accounting from the Fed, with names of borrowers, we have no idea of the full nature of this financial crisis.

Now let’s examine the darkness surrounding the economic impact from the pandemic itself. Larry Summers wrote in his opinion piece for Bloomberg News on Sunday, where he argued against $2,000 stimulus checks, that “Without new stimulus, things would have normalized in 2021.” Seriously?

In 2019, total U.S. Gross Domestic Product (GDP) registered $21.4 trillion according to the Bureau of Economic Analysis (BEA). The state of California has consistently provided more than 14 percent of total U.S. GDP over the past seven quarters. As of the third quarter of this year, according to the BEA, California was providing 14.7 percent of U.S. GDP. As frequently mentioned in the media, if California was a country, it would be the fifth largest economy in the world.

Now take a look at the graph at the top of this article which comes directly from the state of California. The most populous U.S. state and fifth largest economy in the world looks more like a petri dish for breeding COVID-19. The data, which is current as of December 29, shows that California has a positivity rate of 14.5 percent; it has a population of more than 40 million people and zero ICU beds available; and the pandemic is considered to be spreading widely in 54 of its 58 counties.

As of yesterday, there was a Regional Stay at Home Order in 47 of California’s 58 counties. One aspect of that order requires that “all retailers may operate indoors at no more than 20% capacity….” California is also reporting that the increase in new cases and deaths is going in the wrong direction, as the charts below indicate. 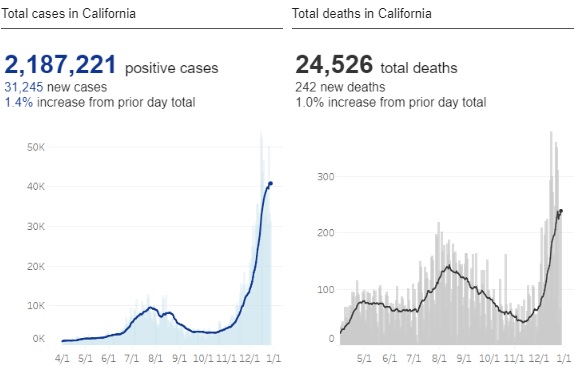 New Cases and Deaths from COVID-19 in California (Source: State of California)

Throwing money at Wall Street and random people, who may or may not be unemployed or need the money, is not a plan. But until there is an administration in Washington that takes this crisis seriously and develops a decisive plan based on a transparent set of facts, $2,000 checks should be considered a critical insurance policy that things won’t get a lot worse until a meaningful plan emerges.