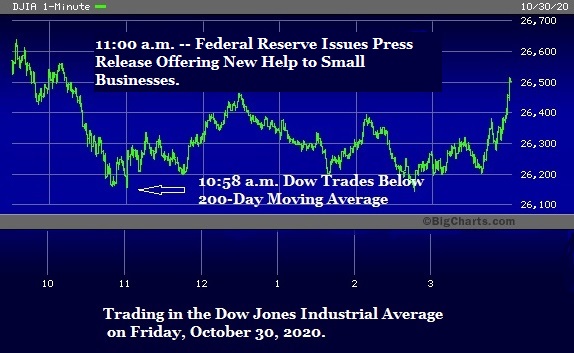 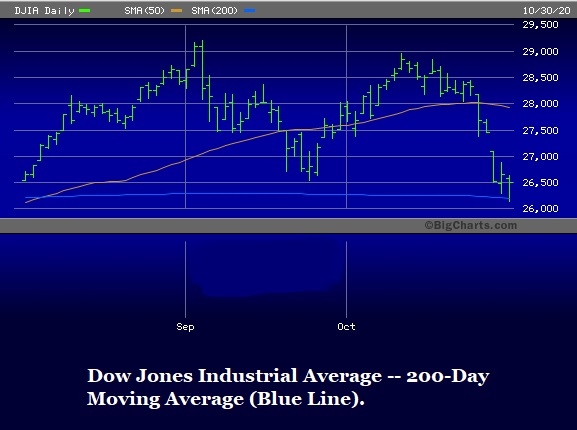 The U.S. stock market, as measured by the Dow Jones Industrial Average, lost 1,833.97 points last week. The Dow was down every day except Thursday, when it eked out a gain of 139.16. The market was reacting to the following bad news: soaring cases of COVID-19 in the U.S.; a reemergence of the virus in Europe causing business shutdowns there; the failure of the U.S. Congress to pass a new stimulus bill; and a sharply lower price for West Texas Intermediate (WTI), domestic crude oil – which signals a further slowdown in economic activity. (At 7 a.m. this morning, WTI was down further, with a $34 handle.)

The stock market’s losses would have likely been greater last week were it not for an intervention staged by the Federal Reserve at 11:00 a.m. on Friday. Here’s what happened and why Americans should be deeply concerned.

A break like that would typically escalate selling in the Dow as computer algorithms detect the break in the moving average and trigger sell orders.

But at 11:00 a.m., the Federal Reserve stepped into the action by issuing a press release that gave an upbeat signal to the market. Since all of the Fed’s jawboning on the need for a new stimulus plan from Congress had failed to get legislation passed, the Fed’s press release indicated it was issuing its own version of a stimulus boost for small business. The Fed announced that its Main Street lending programs would be lowered from the current $250,000 minimum loan size to $100,000 – thus making many more small businesses eligible. The Fed’s news printed at the Reuters wire service at 11:07 a.m. and the market turned up. By the close of trading on Friday, the Dow had erased most of its earlier losses, closing down just -157.51.

In addition to the fact that the Fed’s announcement came within minutes of the Dow dropping below its 200-day moving average, there are other noteworthy aspects to the Fed’s action.

First, it has been the longstanding policy of the Fed to announce market-moving information before the market opens or after it closes. The major exception is the longstanding policy of the FOMC (Federal Open Market Committee) of the Fed to issue its statement at 2:00 p.m. on the second day of FOMC meetings, which occur every six weeks. The Fed’s intervention on Friday with an unanticipated policy change just as the market broke through a key technical indicator, and just three business days before a hotly-contested presidential election, sends the troubling signal that the Fed is putting its finger on the scale for the incumbent president, Donald Trump.

Trump has linked himself to a rising stock market like no other president in history. He tweets about it and he campaigns about it. Even when Trump was in the hospital in early October with COVID-19, he sent out a Tweet stating: “…remember that the Stock Market is getting ready to break its all time high.” It wouldn’t make the current president look too good if the market crashed while he’s still in control of the U.S. economy.

But it’s not the job of the Fed to make Trump’s market prognostications a reality. The Fed is supposed to remain fiercely independent from politics and politicians so that Americans can trust that it is setting monetary policy on behalf of the American people. Jerome Powell, the current Fed Chairman, has failed miserably in that regard.

In 2019, Powell dined with Trump on the occasion of Powell’s 66th birthday. Congresswoman Katie Porter chastised Powell at a hearing for attending a lavish party at the mansion of billionaire Amazon CEO Jeff Bezos. The party was also attended by Trump’s daughter, Ivanka, and her husband, Jared Kushner, as well as by Jamie Dimon, Chairman and CEO of JPMorgan Chase, a serial felon bank supervised by the Fed.

Powell has also retained $25 million in personal assets that are under the investment management of BlackRock at the same time that the Fed handed BlackRock three highly lucrative no-bid contracts – which include the Fed giving the company money to buy up its own Exchange Traded Funds (ETFs). (See Fed Chair Powell Had 4 Private Phone Calls with BlackRock’s CEO Since March as BlackRock Manages Upwards of $25 Million of Powell’s Personal Money and Lands 3 No-Bid Deals with the Fed.)