The U.S. Senate Banking Committee held a virtual hearing yesterday that was benignly titled “Oversight of Financial Regulators.” It would be an understatement to say that there was nothing benign about the hearing. Fireworks went off throughout the hearing as Democratic Senators let it be known that they expected the crony relationship between the Fed and the Wall Street banks to be challenged by the incoming Biden administration.

Senator Sherrod Brown set the tone for the hearing with his opening remarks, telling the panel of Trump era federal banking regulators the following: 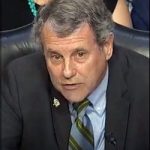 “We can get small businesses back on their feet. We can lift up the Black and brown communities that have been hit the hardest by this pandemic. We can keep people in their homes, make those homes more affordable, and bring down people’s energy bills. We can lead the world in the fight against climate change and seize every opportunity to create good-paying jobs. We can free people from the stress of debt collectors and the downward spiral of payday lenders.

“And we can reorient our economy from wealth to work. To do all of that, we have to take on Wall Street power.

Later in his remarks, Brown said this:

“We have to break up the biggest banks, and give that power to everyone else who has been denied a voice in our economy…

“When work has dignity, we have a strong, growing middle class, and everyone – everyone – can reach it. Making that vision possible is the job of the Banking and Housing Committee. We know we have great challenges – we’re in a public health crisis, an economic crisis, and a climate crisis. And extraordinary times call for us to aim higher and think bigger – to rise to meet this moment, and restore people’s faith in their government. I look forward to coming together with Senators on both sides of the aisle, and with the new administration, to get to work.”

When it came time to question the various federal regulators, Brown told the group that they could have done so much to improve the lives of average Americans but had, instead, “finalized the Wall Street wish list.” Brown then critiqued the failings of each of the regulators, giving the harshest tongue-lashing to Brian Brooks, the Acting Comptroller of the Office of the Comptroller of the Currency (OCC). Brown told Brooks the following:

“One West, the bank that you and [Treasury] Secretary Mnuchin and Joseph Otting [former head of the OCC in the Trump administration] worked at, was known as a foreclosure machine. It makes no sense that the outgoing President handed the wheels of the economy to so many people who had a hand in crashing it in 2008.

“Even though you’re running the OCC without the approval of the Senate, you’ve made sweeping changes to regulation to benefit the same corporations you used to lobby for. It’s exactly this kind of self-dealing that’s eroded so many Americans’ trust in their government and the economy. And last week, 80 million American voters rejected that thinking.” 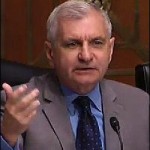 “We are facing a housing tsunami. The National Council of State Housing Agencies indicated that U.S. renters will owe up to $34 billion in past due rent by January, increasing eviction filings, posing punishing financial hardship on millions in just a few months. We could have, in January, and that’s not too far away, hundreds of thousands of people being evicted or foreclosed: And, in the midst of a pandemic where sleeping five in a bedroom is not the best medical advice doctors would give, that could happen. And, indeed, I think we have to do something. So I would hope that you and your colleagues in the housing community would be thinking hard about supporting efforts to provide financial relief to these renters.

“Eventually, it will hit the banks. As they foreclose on the mom and pop landlords, they’ll have a lot of property on their hands which might not be very valuable. So I would hope you would do that.”

Senator Jon Tester of Montana got into a heated debate with Randal Quarles, the Vice Chairman for Supervision at the Federal Reserve. Although both the Chairman of the Federal Reserve, Jerome Powell, as well as Quarles, have previously stated that another round of fiscal stimulus is needed from Congress, Quarles now seems to have been intimidated by some Republicans in Congress who don’t want another stimulus package. Quarles, during the hearing, refused to endorse another stimulus package.

Tester asked Quarles to clarify his position, stating the following:

“We had 125,000 infections a day, which is an incredible number. Experts are saying it will be 200,000 a day by the end of this month. Hospitals are full. They’re full all over the place. In fact, my wife had major surgery last week. Her recovery was in the pediatric unit…I had a doctor tell me three weeks ago that January, February and March may be the toughest months this nation has ever endured, which is a hell of a statement. So, tell me if you really meant that, that there isn’t a need for any additional stimulus, or what exactly did you say?”

Once again, Quarles said that “as a central banker, I should leave those decisions to the Congress.” 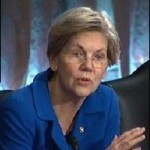 Clearly, by the time it was Senator Elizabeth Warren’s turn to question the panel of witnesses, she was steamed up over the stonewalling. Warren told Quarles that banks are now reporting that they anticipate higher loan default rates. Warren chastised Quarles for “allowing the big banks to continue to shovel billions of dollars out the door in dividends. Money that could be used to survive an historic downturn. You could stop this outflow of money right now.”

Once again, Quarles danced around the question, provoking Warren to remind him that the American taxpayer could be on the hook again to bail out these banks if they fail. Quarles did acknowledge that the Fed is conducting a new round of stress tests and the results would be released in mid-December, on a bank-by-bank basis.

Warren told Quarles: “Your job is to protect the American people, not the bank investors. And, I don’t believe you’re doing your job.”