Stock Mutual Funds Have Had Net Outflows for 25 Weeks, Bringing Total to $388.7 Billion — a Record

Refinitiv Lipper, which has been tracking mutual fund flows for the past 18 years, reports that for the week ended Wednesday, October 14, equity (stock) mutual funds marked their 25th week of net negative outflows, losing -$8.6 billion for the week. Year-to-date, that brings their net outflows to -$388.7 billion. Refinitiv Lipper notes that if that figure stands, it will be the “largest annual net outflows ever, significantly outdistancing last year’s net negative result (-$294.0 billion).”

What raises further alarm bells about the steady outflow from stock mutual funds this year is that for the past 9-1/2 months there has been new money flowing into 401(k) plans from employees who have the money automatically deducted from their paychecks and sent along to their 401(k)s. Since stock-based Exchange Traded Funds (ETFs) have barely cracked the 401(k) market, it’s the stock mutual funds in 401(k)s that should have been the big beneficiaries of this money – and yet they are still seeing historic net outflows of money.

So where is the money going if not into stocks? It’s quite possible that folks in 401(k)s have switched to a more conservative posture by moving out of stock funds and into money market funds in their 401(k)s. Refinitiv Lipper reports that money market funds had net outflows for the twelfth straight week as of October 14, but still show positive inflows of $687 billion year-to-date.

For our view on the 401(k) plan, see 401(k) Plan Has Been a Disaster for Black Workers (And a Wealth Transfer to Wall Street for Everyone Else).

When you hear President Donald Trump brag about how well the stock market is doing this year, what he should be saying is how well technology stocks are doing. S&P Global has a fascinating chart that provides an ongoing look at where the S&P 500 stock market index would be without all those technology stocks. They call it the “S&P 500 Ex-Information Technology.” Through the close of trading yesterday, October 15, 2020, which represents 79 percent of a 12-month year, the S&P 500 Ex-Information Technology had gained a scant 0.35 percent. (Go to this link and click on YTD for year-to-date results.)

As we explained on August 31:

“When you have six companies that have been dramatically outperforming other stocks this year, and just five of them (Alphabet (parent of Google), Amazon, Apple, Facebook, and Microsoft) make up more than 20 percent of the S&P 500’s total market capitalization, you can get an aberration in the pricing of the broader index.

“To put it simply, were it not for these six stocks, the whole S&P 500 index would be negative for the year.”

Unfortunately, bubbles in tech don’t end well. Below is a chart showing how a consumer staples stock like Procter & Gamble performed in the market crash of 2008 and early 2009 versus two big tech names, Apple and Microsoft. 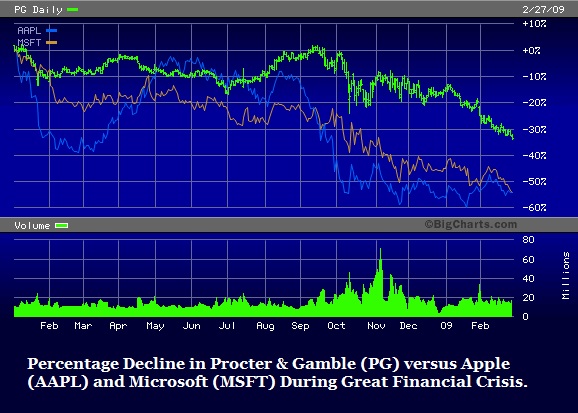