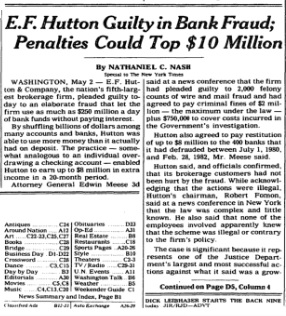 On May 2, 1985 the highest law enforcement officer in the United States, the head of the U.S. Department of Justice, Attorney General Edwin Meese, held a news conference to announce that the sixth largest brokerage firm on Wall Street, E.F. Hutton, was pleading guilty to 2,000 felony counts of wire and mail fraud. It had also agreed to pay criminal fines of $2 million and up to $8 million in restitution to the 400 banks it had defrauded. The fraud had lasted less than two years, from July 1, 1980 and February 28, 1982, and consisted of the following according to the Justice Department:

“The essence of the charges was that Hutton obtained the interest-free use of millions of dollars by intentionally writing checks in excess of the funds it had on deposit in various banks.”

On the following day, Friday, May 3, the New York Times put that story on the front page of its newspaper.

This was the fourth and fifth criminal count to which JPMorgan Chase had pleaded guilty since 2014 — an unthinkable and unprecedented history of criminal conduct by the largest bank in the United States. But the New York Times did not run one word about these latest criminal charges on its front page. In fact, no story at all, that we could find, appeared in the print edition of the newspaper.

JPMorgan has been headquartered in Manhattan where the New York Times is located for more than a century. It has 5,239 federally-insured bank branches spread across the country. It holds $1.7 trillion in domestic deposits for moms and pops, small and large businesses, public pension funds, states and municipalities across America. And yet getting slapped with five criminal felony counts in a span of six years is not front-page news at the New York Times. It doesn’t even warrant coverage anywhere in the newspaper.

The Criminal Information (details of charges) filed by the Justice Department, and linked at the bottom of the press release, indicated that JPMorgan Chase had not, like E.F. Hutton, been engaged in this fraud for less than two years, but had been rigging the precious metals market for more than eight years and the U.S. Treasury market for just under eight years.

In 1985, the U.S. Department of Justice brought a criminal count against E.F. Hutton for each criminal act, i.e., 2,000 counts. Under the William Barr Justice Department of 2020, “tens of thousands” of instances of fraud in the precious metals markets were all lumped into one single criminal count. For the “thousands of episodes” of rigging the U.S. Treasury market, JPMorgan Chase also got those lumped into one single count.

In the 1985 case against E.F. Hutton, in addition to the other fines, the Justice Department made the firm pay an additional $750,000 for the cost to the taxpayer to investigate the charges.

Reading that today seems like a quaint relic of the America we used to be. JPMorgan Chase has been under so many criminal and civil investigations since Jamie Dimon took the helm as Chairman and CEO of the bank that the unreimbursed cost to the taxpayer is likely in the billions of dollars. That fact hasn’t made the front pages of any newspapers in America either.

Consider the rap sheet of JPMorgan Chase that was published by two trial attorneys in the book: JPMadoff: The Unholy Alliance between America’s Biggest Bank and America’s Biggest Crook. Attorneys Helen Davis Chaitman and Lance Gotthoffer provided this chronology:

This was all in addition to the focus of the book: the two criminal felony counts brought against JPMorgan Chase in 2014 for its role in the Bernard Madoff Ponzi scheme.

Following the publication of Chaitman and Gotthoffer’s book, the crime spree at JPMorgan Chase continued. In 2016 the bank agreed to charges by the SEC that it had steered its customers into in-house products where it reaped higher profits without disclosing this conflict to the customer. It paid $267 million to settle the charges.

In 2018, JPMorgan was charged multiple times. In October 2018 it agreed to pay $5.3 million to settle U.S. Treasury allegations that “it violated Cuban Assets Control Regulations, Iranian sanctions and Weapons of Mass Destruction sanctions 87 times,” according to Reuters. In December 2018 it settled claims with the SEC for $135 million over charges that it had improperly handled thousands of transactions involving the shares of foreign companies.

In 2019, for the first time that Wall Street veterans can remember, the Justice Department brought Racketeer Influenced and Corrupt Organizations Act (RICO) charges against individual traders working on the precious metals desk at JPMorgan Chase. RICO charges are typically brought against organized crime figures. When the Justice Department brought those charges on September 16, 2019, it was too timid to even name JPMorgan Chase. It simply referred to it as “Bank A”.

And now, a year later, we have two more criminal counts against this serial criminal actor on Wall Street – all while the Board of Directors leaves the same man, Jamie Dimon, at the helm of the bank with an annual compensation package of $31 million. And the New York Times, the so-called paper of record, can’t seem to muster a front-page article on what has gone so terribly wrong at the nation’s largest bank.