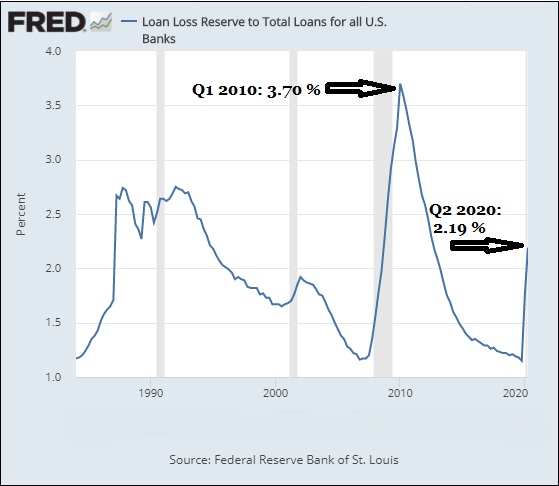 It’s time to revisit that scene from the movie, The Big Short, where Steve Carell, playing Mark Baum, is sitting in the audience at the American Securitization Forum and interrupts the speaker on stage who has just stated that he expects subprime losses “will be contained at 5 percent.” Baum loudly asks: “Would you say that it is a possibility or a probability that subprime losses stop at 5 percent?” The speaker says: “I would say that it is a very strong probability, indeed.” Baum sits down but then begins to waive his arm in the air, forming a zero with his fingers. Baum then shouts out: “Zero! Zero! There is a zero percent chance that your subprime losses will stop at 5 percent.”

You can view the scene from the movie below.

That scene came to mind when we graphed the loan loss reserves at U.S. banks through the second quarter of this year, using data from the St. Louis Fed. (See above chart.)

Consider us on record as waving our arm in the air and shouting that there is zero, ZERO! chance that the megabanks in the U.S. are properly reserved for what comes next.

The reason that these publicly-traded mega banks, with CEOs making in the range of $25 million to $30 million a year, don’t want to properly reserve for potential losses is that it crimps quarterly earnings, which might crimp their stock awards, which might crimp their pursuit of becoming a billionaire like Sandy Weill did at Citigroup – not long before the bank began secretly receiving the largest bailout in history from the Federal Reserve Bank of New York, topping out at more than $2.5 trillion in cumulative loans according to a government audit released in 2011. Good quarterly earnings also provide a prop under the share price so that the guys in the corner offices can cash out their stock option grants at a fat profit.

These same mega banks are also the most politically-connected. Quietly, they managed to get relief from reserving for losses on financial instruments stuffed into the CARES Act stimulus bill passed by Congress in the spring. The language in the bill relieves the banks from a new accounting measure that would have forced these banks to begin anticipating losses and reserving for them. The measure is called Current Expected Credit Losses or CECL (pronounced Cecil). We had watched numerous Senate hearings prior to the passage of the CARES Act where Republicans argued for relief for the banks from Cecil. They cleverly managed to get it stuffed into the desperately needed CARES Act.

The CARES Act contains this passage:

“(b) TEMPORARY RELIEF FROM CECL STANDARDS.—Notwithstanding any other provision of law, no insured depository institution, bank holding company, or any affiliate thereof shall be required to comply with the Financial Accounting Standards Board Accounting Standards Update No. 2016–13 (‘Measurement of Credit Losses on Financial Instruments’), including the current expected credit losses methodology for estimating allowances for credit losses, during the period beginning on the date of enactment of this Act and ending on the earlier of— (1) the date on which the national emergency concerning the novel coronavirus disease (COVID–19) outbreak declared by the President on March 13, 2020 under the National Emergencies Act (50 16 U.S.C. 1601 et seq.) terminates; or (2) December 31, 2020.”

But, there will be a day of reckoning according to the accounting firm Grant Thornton. It writes:

“Based on discussions with the SEC staff, we understand that eligible entities that elect to defer the adoption of ASU 2016-13 will need to apply the transition provisions of ASU 2016-13 when the deferral period under Section 2014 ends. That is, entities will need to retrospectively restate their year-to-date results when they adopt ASU 2016-13 to reflect its application as of the beginning of the entity’s fiscal year, which would be as of Jan. 1, 2020, for entities with calendar year-ends. Quarterly results during the deferral period will also need to be retrospectively restated in future quarters when presenting comparative results.”