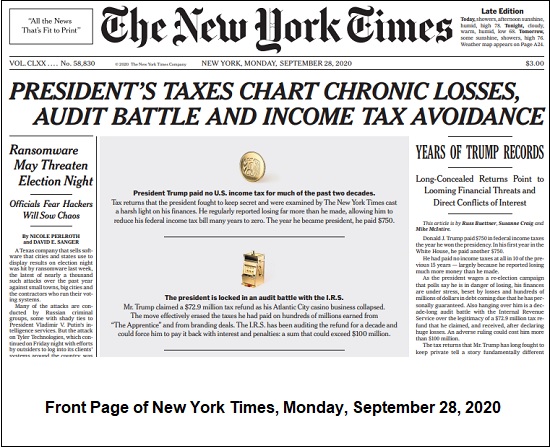 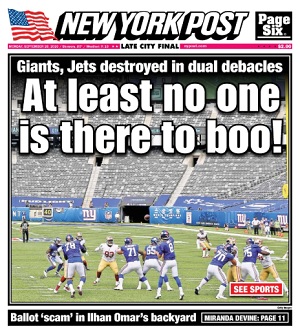 The United States is a country where Americans get to select their own news reality and, with that, their own reality of the gravest threats their country is facing. If you read the New York Times, you will clearly view the President of the United States, Donald Trump, as financially compromised and the gravest national security threat the nation faces. If you are a devotee of the Rupert Murdoch empire of right-wing news (Wall Street Journal, New York Post, Fox News) you are this morning lost in a world of empty stadiums and Trump charges of “fake news.”

Yesterday, the New York Times’ digital page broke the story that it had obtained from a source legally permitted to have the material, of more than two decades of Donald Trump’s tax returns. According to the Times, the returns show that in 2016, the year Trump was running for President, and in 2017, his first year as President, the man claiming to be a billionaire paid $750 in federal income taxes each year. That’s far less than most blue collar workers pay. (Last night the pro-Republican Drudge Report led with a bold red headline, asking: “The Fake Billionaire?”)

The Times also reports that Trump “paid no income taxes at all in 10 of the previous 15 years.” Heretofore, Trump has refused to provide any of his tax returns, saying he was under a “routine” audit. According to the New York Times, there was nothing “routine” about this audit. The Times explains that the audit centers on the stunning fact that Trump received a tax refund of $72.9 million. Yes, the Internal Revenue Service actually wrote out checks for $72.9 million in tax refunds and paid it to a self-described billionaire. It’s tough to say who looks worse in this reporting – the IRS or Donald Trump.

The Times believes the audit dispute “may center on a single claim that jumps off the page of Mr. Trump’s 2009 tax return: a declaration of more than $700 million in business losses that he had not been allowed to use in prior years. Unleashing that giant tax-avoidance coupon enabled him to receive some or all of his refund.”

At a press conference yesterday, Trump dismissed the Times reporting as “fake news.” He declined, however, to refute any of the specific allegations. Since Trump readily files lawsuits against anyone who threatens his alternative reality of himself, one has to wonder why he is not filing a defamation lawsuit against the New York Times or filing for a court injunction against further dissemination of the report, if the reporting is false as he claims.

Murdoch’s Wall Street Journal has all but ignored the blockbuster reporting on its front page today. It leads with a story that is not on the radar of most average Americans in the middle of a pandemic and hotly contested Presidential election – a story about the Chinese social media/video sharing app, TikTok. The Journal also carries two stories on Trump’s Supreme Court pick, Amy Coney Barrett, and this crucial piece of news: “Some Travelers Miss Flying So Much, They’re Taking Planes to Nowhere.” Buried in small print far down on the front page of the Journal is this response to the Times’ reporting: “President Trump disputed a report that he had paid little or no federal income taxes in recent years, but declined to say how much he has.”

Murdoch’s New York Post is even farther out in left field today with a front cover showing an empty football stadium with this headline: “Giants, Jets Destroyed in Dual Debacles.”

Murdoch’s Fox News leads with this headline today: “EXCLUSIVE: Inside the White House’s plan to defend Amy Coney Barrett during confirmation battle.” There are at least a dozen more articles at Fox News before one arrives at this headline halfway down the digital front page: “Trump calls New York Times report that he avoids paying taxes ‘totally made up’.”

The reporting on the main story for the New York Times was bylined by Russ Buettner, Susanne Craig and Mike McIntire. Buettner and Craig, together with David Barstow, shared a 2019 Pulitzer Price for their 2018 reporting on Trump’s “Suspect Tax Schemes.” McIntire was part of the investigative team that shared a 2017 Pulitzer Prize for reporting on the covert Russian interference in the 2016 President election.

This group of reporters has built up institutional knowledge, backed by an arsenal of tax returns and property appraisals, to assess the true state of Trump’s finances. Their assessment is this: “Financial pressure on the president is only growing. Mr. Trump has reported losses at many of his signature properties, including $55.5 million at his Washington hotel since it opened in 2016, and $315.6 million at his prized golf resorts since 2000. He appears to have sold off most of his stocks and has relied heavily on debt. More than $300 million in loans he personally guaranteed will soon come due.”

This latest report comes on top of a court action filed in August by the New York State Attorney General, Letitia James, to obtain documents related to her investigation of testimony delivered to Congress by Trump’s former lawyer, Michael Cohen. In that testimony, Cohen stated that Trump’s annual financial statements had inflated the value of his assets to obtain favorable terms for loans and insurance coverages, but he then deflated the value of other assets to reduce his real estate taxes.

The New York State Attorney General’s action is separate from the tax fraud investigation of the Trump Organization currently being conducted by the Manhattan District Attorney’s office.

Tomorrow evening will be the first of the Presidential debates between Trump and Democratic challenger, former Vice President Joe Biden. Fox News anchor, Chris Wallace, will be the sole moderator of the debate. Let’s see how that works out.