Senator Sinema Tells Mnuchin and Powell She Lived in an Abandoned Gas Station as a Child; Asks What they Plan to Do About Wave of Coming Evictions 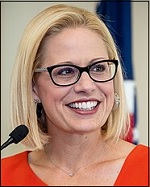 Fed Chair Jerome Powell looked genuinely troubled as Senator Kyrsten Sinema of Arizona shared her traumatic childhood during yesterday’s Senate Banking hearing. The witness panel included both Powell and Treasury Secretary Steve Mnuchin. Sinema first asked Mnuchin and Powell if they had ever been evicted from their home. Both said no. She then shared this:

“Well, as you may know, I was homeless for a number of years as a child. And I wouldn’t wish it on anyone. I know the challenges that Arizona families are facing right now and it’s an important perspective for people here in Washington to understand.

“When I was in elementary school, my Dad lost his job and my parents got divorced. We lost our car and our home and we were homeless for almost three years. We lived in an abandoned gas station without running water or electricity.”

The New York Times has suggested that Sinema has embellished this story, but concedes that she and her family did live in an abandoned gas station; that it was a trying time; and that she had the grit to go on to graduate high school at age 16, as valedictorian of her class.

Sinema was making the case that dramatically more stimulus from Congress is urgently needed. She said “According to the Census Bureau’s household Pulse Survey, over 300,000 Arizona families missed their July rent payments. Two-thirds of those households are families with children.” Sinema went on to remind Mnuchin and Powell that Arizona’s unemployment insurance, at $240 a week, is the second lowest in the nation and without Congress passing a continuation of the prior unemployment supplement of $600 a week, the eviction crisis is destined to get worse.

Another emotional moment in the hearing came when Senator Sherrod Brown of Ohio appeared outraged at Mnuchin and President Trump praising themselves over the great job they’ve done. The exchange went like this:

Mnuchin: “I do. I think we’ve made tremendous progress…

Brown went on to remind Mnuchin where the U.S. economy stands compared to other countries:

Brown: “You bragged about the economy growing so ‘fast,’ your words. Our unemployment rate is significantly higher than Germany’s; significantly higher than France’s; twice what Taiwan’s is; almost three times what South Korea and Japan’s is; much higher than Australia; twice what Britain’s rate is; twice what New Zealand’s rate is. I mean, I know you think the economy is doing well if you’re talking to your wealthy friends on Wall Street, but things are pretty bad for most working Americans. Things are going to get worse unless you come up with a real [stimulus] package….”

Later in the exchange, Brown reminded Mnuchin that Republicans offered a “paltry” $500 billion stimulus plan when “economists all over the country wanted 3 and 4 and 5 times that amount.” Brown asked why Mnuchin was so successful in getting Republicans to fall in line and approve the massive $1 trillion-plus tax cut “where 70 percent of it went to the richest people in the country,” but he can’t get those same Republicans to fall in line to pass a larger stimulus bill during this economic crisis.

Mnuchin said that he continues to negotiate with House Speaker Nancy Pelosi.

The strangest moment in the hearing came when Senator Pat Toomey of Pennsylvania asked Mnuchin and Powell about the current availability of credit for credit-worthy borrowers in light of all of the Fed’s emergency lending operations.

Powell gave a bizarre answer, stating, “We haven’t made a single loan to a corporate directly and yet something like a trillion dollars in financing has happened.” You can watch the full exchange at 53 minutes and 59 seconds (53:59) here.

Maybe Powell was having a senior moment or maybe he was talking about the corporate bond program where the Fed is buying up corporate bonds in the secondary market.

The truth is that the Fed has made more than $9 trillion, cumulatively, in direct repo loans to the trading houses (primary dealers) on Wall Street. Those are certainly corporations and they certainly benefited from a steady supply of cheap money.

The Fed has previously stated that it will release the names of the borrowers and amounts borrowed under its emergency lending programs – but only those where the taxpayer has put up loss absorbing capital. That has left the following programs with no guarantee of timely transparency: the Fed’s $9 trillion in repo loans; the Fed’s Discount Window, which back in April had a balance of $33.7 billion that had been loaned to unnamed depository banks; the $31.5 billion that was outstanding in April at the Fed’s Primary Dealer Credit Facility, which made revolving loans at ¼ of one percent to the trading houses on Wall Street against collateral that included stocks and toxic waste known as CDOs and CLOs.

No matter how one attempts to spin the economic reality of this crisis, Wall Street, once again, got bailed out while the average American continues to get sold out.