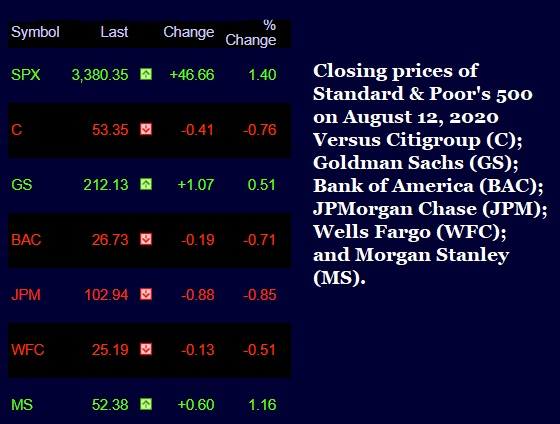 The Federal Reserve has thrown everything just short of the kitchen sink at propping up the mega banks on Wall Street – the same ones that were never prosecuted for their fraudulent issuance of mortgage securities and causing the worse economic crash since the Great Depression in 2008. (The Fed bailed the same banks out back then also – to the tune of $29 trillion in cumulative loans.)

But yesterday’s market action suggests that something is definitely amiss. The S&P 500 index closed at 3380, just 7 points away from topping its all-time high of 3386 that it set on February 19 of this year. The Dow also gained 289.9 points on the day. But now look at the chart above. There was a sea of red in the Wall Street bank stocks. While the losses in Citigroup, Bank of America, JPMorgan Chase and Wells Fargo were all less than 1 percent, they stood out noticeably. For example, six of the Dow Jones Industrial Average components closed with gains of more than 2 percent. Those stock were Intel, United Health, Merck, Home Depot, Microsoft and Apple. (Apple actually gained 3.32 percent on the day.)

The action in the Wall Street bank stocks is particularly noticeable because Federal Reserve Chairman Jerome Powell has gone out of his way to repeat the following phrase at his press conferences and appearances before Congress: the big banks “are a source of strength” in this economic downturn. If they were actually a source of strength, shouldn’t their share prices be doing better than their corporate clients?

The reason that Goldman Sachs and Morgan Stanley went against the herd yesterday and closed in the green, is the perception that they are still predominantly investment banks and make less business loans than the big commercial banks like Citigroup, Bank of America, JPMorgan Chase and Wells Fargo. As the economy has dramatically weakened this year and corporate credit downgrades and bankruptcies increased, those commercial banks have been forced to set aside ever larger amounts for loan loss reserves, which eats into their profit picture.

What the “perception” is missing is that all of these banks (Wells Fargo to a far smaller degree) are interconnected through their derivatives contracts, using the same counterparties on the other side of tens of trillions of dollars in derivative contracts. As we reported yesterday, federal regulators poorly understand the risks involved because the banks are allowed to conduct trillions of dollars of these trades in foreign jurisdictions that fall outside of U.S. regulatory inspection.

Wall Street banks react poorly to exploding Treasury debt because they are contractually bound, as the New York Fed’s “primary dealers,” to buy debt at the Treasury auctions. Reuters reported that the primary dealers purchased 19.83 percent of yesterday’s Treasury notes.

Wall Street banks also worry that all of this mushrooming supply of Treasury debt is going to put upward pressure on interest rates, which could negatively impact the tens of trillions of dollars they hold in interest rate derivative bets and potentially blow up one of the big banks or their counterparties.  Indeed, yesterday saw Treasury yields rise for the fourth consecutive session.

According to data from the U.S. Treasury, the Treasury borrowed an unprecedented $2.753 trillion in privately-held net marketable debt in the second quarter. Treasury said it expects to borrow $947 billion in the third quarter; followed by a massive issuance of $1.216 trillion in the fourth quarter of this year.

According to an August 5 statement released by the Treasury, it “continues to face unprecedented borrowing needs as a result of the federal government’s response to the COVID-19 outbreak.”

Before the COVID-19 pandemic arrived, Powell had been warning at his press conferences that it was not prudent or sustainable for the U.S. national debt to be growing faster than economic growth in the U.S. The situation today is that the national debt is growing exponentially while the economy is actually shrinking. That fact, alone, means that the massive rally in the stock market since the March lows runs along the lines of the Dutch Tulip Mania bubble.

As we learned in the collapse of the dot.com bubble in 2000 and the mortgage-securitization/derivatives fraud bubble in 2008, bubbles can last much longer than common sense would suggest. Inevitably, however, no matter how much money created out of thin air that the Fed throws at the problem, the crash arrives, forcing the federal government to take on even more debt to stimulate a crashing economy.

We have been locked in this vicious cycle since the repeal of the Glass-Steagall Act in 1999. The Glass-Steagall Act was signed into law during the Franklin Delano Roosevelt administration of 1933. It created federally-insured bank deposits for the first time and banned deposit-taking banks from combining with the high-risk investment banks on Wall Street. Under that legislation, the U.S. enjoyed a sound financial system for the next 66 years. Just nine years after its repeal in 1999 during the Wall Street-cozy Clinton administration, Wall Street collapsed in a replay of 1929.

Until Congress finds the courage to restore the Glass-Steagall Act, we’re all just dumb tourists at the American Casino table. (For a closeup look at this Casino, see the video below from 2009.)