U.S. GDP Number Tomorrow Expected to Be Worst on Record 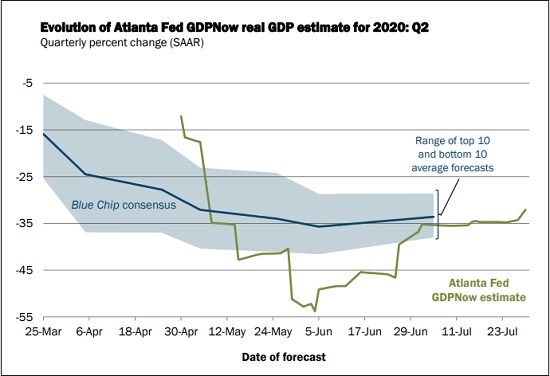 The very reliable GDPNow forecasting model provided by researchers at the Atlanta Fed was just updated this morning and currently predicts that Gross Domestic Product (GDP) in the United States contracted by a jaw-dropping -32.1 percent on a seasonally-adjusted, annualized rate in the second quarter. The public will get the official number from the Bureau of Economic Analysis (BEA) at the U.S. Department of Commerce at 8:30 a.m. tomorrow morning.

As the chart above indicates, after the precipitous economic declines in April and May, resulting from the effects of business closures and layoffs to halt the spread of COVID-19, the GDPNow model was predicting far worse on June 4 – a decline of -53.8 percent for second quarter GDP based on data coming in at that time. The money flowing from the Fed and the CARES Act legislation has significantly cushioned the downturn.

GDP is the value of the goods and services produced in the United States. The growth rate of GDP is the most widely-watched indicator of the nation’s economic health and is widely monitored and reported by news media around the world. It is used by businesses to make decisions on investment and hiring and by policymakers like the Federal Reserve to adjust monetary policy.

Because the U.S. is viewed as one of the key drivers of economic growth globally, the number coming out tomorrow morning will have serious ripple effects on consumer sentiment and spending far beyond U.S. shores. As a result, expect U.S. corporate media to downplay the gasp-worthy number.

One might have thought that a concerned, compassionate Congress might have had a pandemic relief bill signed, sealed and delivered before the unnerving GDP number is released tomorrow – if for no other reason than to bolster consumer confidence and to help keep a roof over the heads of the 30 million Americans who have been thrown out of work through no fault of their own.

But that is not the case. The various sides are far apart. The President wants to include in the bill $1.75 billion to build a new FBI building in Washington, D.C. (Even Senate Majority Leader Mitch McConnell doesn’t like that oddball addition to the bill. Democrats suspect it’s to prevent a competing hotel from being built on the site, which is close to the Trump International Hotel.) Republicans want to include language in the bill that provides liability protection to corporations from being sued over measures they took or didn’t take during the pandemic. (Perhaps the Republicans are thinking of those facilities that rented their auditoriums so that thousands could attend mask-less Trump rallies.) House Democrats have their own $3 trillion HEROES Act proposed legislation – which is $2 trillion more than being offered by Senate Republicans.

“C” represents consumer spending, made up of the goods and services people buy, such as food, clothing, doctor and dentist visits and so forth.

The “I” represents investment. This includes business spending on land, buildings and equipment. It also includes purchases of homes by consumers.

The “G” is made up of spending by federal, state and local governments. This includes spending on such things as schools, roads, or national defense.

What is not included in GDP are the following items: the value of services parents provide for their children and the unpaid volunteer work performed by millions of Americans for charities. Also not included are illegal activities like drug-running, prostitution and money laundering.

Money laundering is a much larger business than many policymakers in the U.S. choose to acknowledge. Major domestic and foreign banks on Wall Street have been repeatedly charged with money laundering. You can read a previous report on the topic as it relates to Citibank here; to JPMorgan Chase here;  Deutsche Bank here; UBS here; and HSBC here.